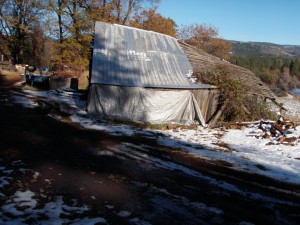 Our property came with a dilapidated barn. It was built in the style known as a New England Bay Barn: a central rectangle with high peaked roof and lower sections, less steeply sloped, along two sides—the bays. It’s a great barn for areas that see snow, as we often do, since the high center roof tends to create a slide effect. It’s also good for a multipurpose barn, as the central area can be used to store hay or tall equipment, and the bays can be used for milking, horse stalls, parking a tractor, or a spot to tinker under in a rainstorm. Built of rough-cut lumber and never painted or stained, the barn has weathered over the years until it is a dark grey on the outside. The barn is close to a hundred years old, according to our information—and looks it. In fact, so dilapidated is this barn that I hesitate to dignify it by calling it a structure. “Shambles” might be more accurate. The structure leans to the east and slumps to the south; the north wall is still mostly intact but it has ripples in the vertical face so the wall looks as though it has a couple of S-shaped curves. Like an ancient horse, it sags in the backbone and all of its ribs are visible. When we bought the property five years ago, the left hand bay had long since crumbled into oblivion, over three quarters of the roof was gone, and blackberry vines had taken over most of the interior. Part of the problem was that the materials used simply weren’t heavy enough. Rafters, siding, posts and joists were of lightweight wood—much too light, really—what should have been two by sixes were one by sixes. The elements attacked the barn fairly quickly, and four years ago, we had a “100 year storm”, which took off another section of the roof and made the rear of the barn sag. The remaining bay still had enough tin to be called a roof, but it had lost large chunks of wall to broken boards and rot. The tin seemed to be the only thing in the barn of any real quality; it is actual tin, as opposed to the more modern aluminum, with a design of ridges alternating with wide flat channels. Most aluminum roofing these days has an even series of corrugations (think cardboard interiors).

Still, once we actually moved onto the property and got the fences built (which occupied the first year and much of the second as we had a long delay while my husband recovered from multiple surgeries), we had animals to feed and needed somewhere to store hay, so we shored up the sagging crossbeams with rough-cut logs and went through the third winter with a tarp to bolster the meager shelter of the remaining roof. We muttered frequently about just burning the whole thing down, but first we needed to build a new barn, and that meant cutting, hauling, and milling the lumber; leveling the pad; setting the poles… in short, we were going to have to make do with the old barn for a while longer.

So today we started to repair the barn. The first task was to install metal flashing under the edge of the tin roof. For some reason, the bay had been built without a roof overhang; when the wall rotted, which it was bound to do in short order from constant water exposure each winter, there was no protection for anything stored inside. Even with the tarp, we lost a number of hay bales to mold because there was just no way to get it covered completely. After removing the old nails—and picking up several dozen that seemed to have just been thrown on the ground under the eaves—we discovered the header along that wall was also rotten. Out came the header, and we went off to our pile of milled wood for another board. The new header was wedged under the old tin and screwed into position, and the flashing cut to size. Then my husband lifted the old tin, one sheet at a time, while we both slid the flashing underneath. After much heaving and shoving, we were prepared to screw it down to the new header.

I should mention that when we do these sorts of jobs, I am generally tasked with passing screws or nails, holding the ladder, supporting things that are being screwed or nailed down, and acting as a general gopher. It is rare that I am trusted with power tools, although in a magnanimous moment he might allow me to swing a hammer. Thus I was standing at the foot of the ladder while the youngest granddaughter fished in the plastic bag and handed me the new screws, which I passed to the master carpenter while listening to the flood of maledictions, imprecations and flat-out cussing about the builder of the barn. It seems that the primary reason the barn was falling down so soon was that the roof had been nailed on rather than screwed down, and the nails had been placed in the flat channels of the roof rather than through the ridges of tin. Water being what it is, my husband explained between curse words, it ran off the ridges and into the flat channels, where it leaked through the nail holes and rotted the wood underneath. Not to mention that the ridges were where the tin sheets overlapped; by not nailing them down, the builder had allowed wind to lift the edges. The nails we were finding all over the ground had literally fallen out of the roof as the wood rotted and wind pulled the tin up. He had a lot more to say about the general quality of the workmanship, but I was busy distracting the three year old so she wouldn’t learn too many new words from Papa.

But eventually we got that part of the roof repaired, finishing in a spatter of rain. The next day, we tackled the center section, which had only about half of its tin. And several of those sheets were partials, ripped and twisted by winds from the big storm. We rigged
a way to reach the higher rafters and ridgepoles using an extension ladder and the backhoe, then crawled carefully up to screw down the tin. Meanwhile I watched with fingers crossed—except when I was lugging recycled sheets of tin from the pile we salvaged after the big storm, or passing them up to the roof.  Again we finished in the rain, but this time it was clear that it was going to be more than a spatter. So we tarped the alfalfa in the center section as a precautionary measure (and a good thing we did, as we got a storm twenty-four hours later that dumped at least 5 inches on us). The repair job will do for a while, and next year, we’ll have a new barn.