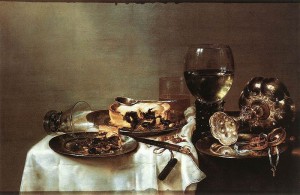 You may have missed it—I did until I happened to run across an article somewhere—but in April 2009 there was an incident in Pennsylvania which is now known as “Piegate”. Seems the ladies of St. Cecilia Catholic Church in Rochester, Pennsylvania, were selling—horrors!—pies baked at home in their own kitchens. Under the state’s food-safety code, facilities that provide food at four or more events in a year require at least a temporary eating and drinking license, and the food must be prepared in a state-inspected kitchen. Since St Cecelia held six fish fries during Lent, they triggered the licensing requirement. A state inspector who happened to be there tried to shut the bake sale down, because they were selling food that had not been baked in a certified, inspected kitchen. To add insult to injury, the women were told that they could get their home kitchens inspected for a $35 fee. After much upset and (according to rumor) bribes to elected officials of home-baked cookies from those uncertified parish kitchens, a law was passed to allow bake sales to resume.

There are several things about this situation that should give one pause.

The first is the lack of common sense. If those women had been having pie sales for many years without any indication of food-borne illness, shutting them down was, at a minimum, poor judgment. The inspector may have been following the letter of the law, but after a moment’s thought for the possible consequences might have considered other options: calling a supervisor for a temporary exemption; working something out with the parish organization for future sales; even turning a blind eye to the particular sale and then coming back later to inform the parish of the problems posed by their pie sales. Because of this officiousness, the situation blossomed into a national incident, with people as far away as California calling to offer support and send donations. Churches started tattling on each other to the Pennsylvania Department of Agriculture (which probably says more about a lack of Christian charity than actual kitchen cleanliness).

The second is the proliferation of laws about food safety, which in many cases seem to have little if any relation to safety. For example, I have been feeding people from my kitchen—family, friends, neighbors and strangers (yes, I donate to bake sales)—for over forty years. There have been no instances of illness. That’s a pretty darn good track record, and I fail to understand how paying a $35 fee to allow a state inspector to walk around and inspect it will make my kitchen any safer. Raw milk is another example. If I want to drink my own milk or give it away, nobody cares. But if I sell it, suddenly there are all sorts of regulations. So money changing hands makes the milk unsafe? Maybe the bacteria from the money contaminate the milk?

Third, why is it up to the government to make decisions about what I eat? If I have concerns about a restaurant or a church bake sale, I’m not going to buy the food. If I have educated myself about the possible risks of raw milk (which are very much overhyped, by the way) and choose to drink it anyway, then I can make the choice and accept the consequences. If I have been buying pie at a bake sale for many years, and my neighbors have been buying them for many years, and no one has ever gotten sick, I can make my own risk/benefit calculation and don’t need a state inspector to protect me.

I keep hoping that we’ll see an outbreak of common sense on the issue of food safety, but I’m afraid that hope is doomed to disappointment. Robert Heinlein was of the opinion that “The human race divides politically into those who want people to be controlled and those who have no such desire. The former are idealists acting from highest motives for the greatest good of the greatest number. The latter… are more comfortable neighbors.”

I bet the ladies of St. Cecelia’s Parish would agree.

1 Response to The Implications of “Piegate”