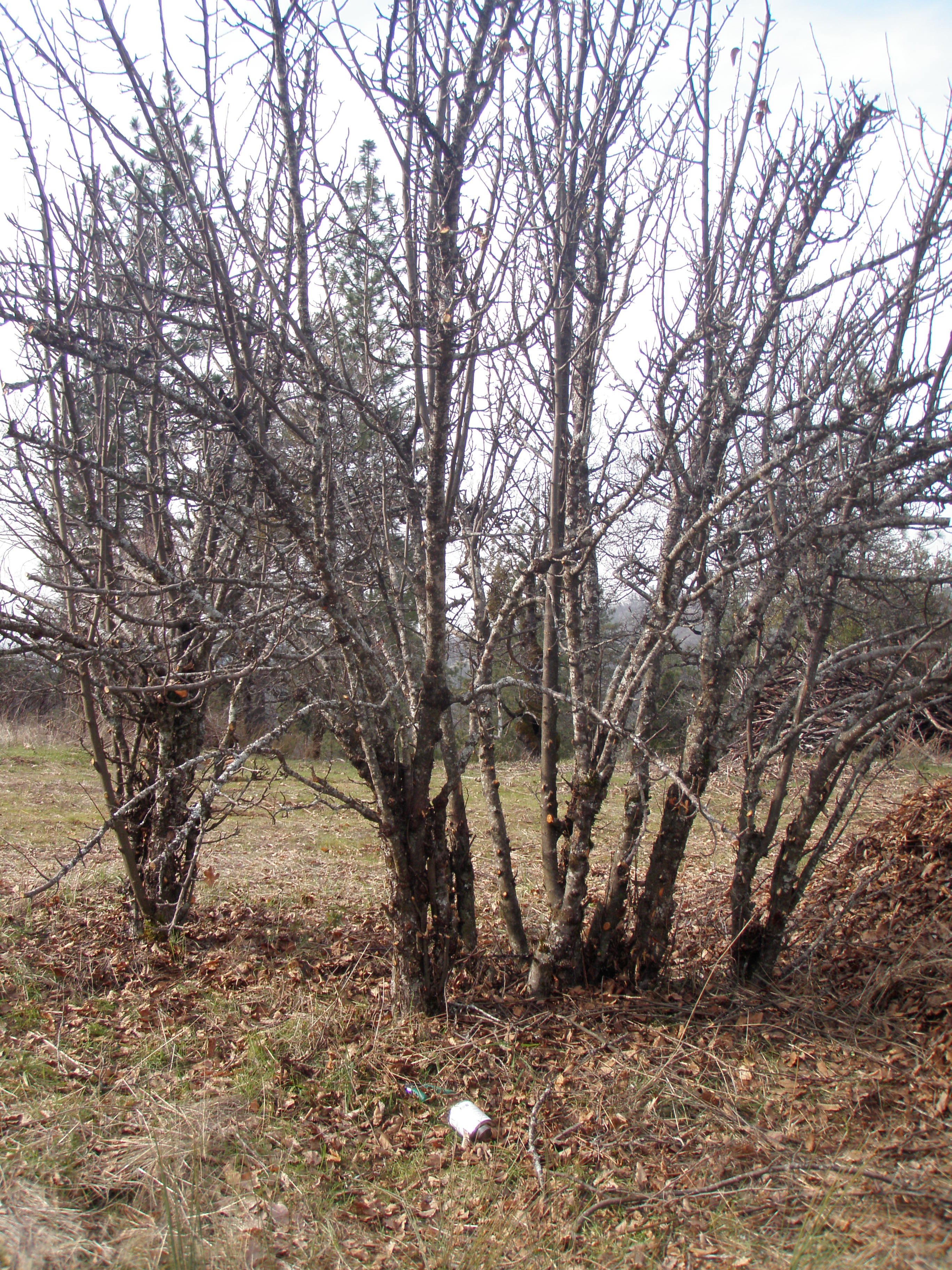 When we bought this place, we knew it had an orchard—about eight to twelve trees in a frost pocket near the site of the old homestead. It probably wasn’t originally a frost pocket, although it does face north. It just had a fair number of trees, mixed conifers and oaks, which gradually grew tall and dense, shading the orchard and creating a place where the ground stays frozen even when most of the rest of the place has thawed out. We tried counting the trees but they were so overgrown with blackberry and grape vines that it was almost impossible.  What we discovered, as we gradually got acquainted with the place, was that there was another entire orchard about a half mile away, and quite a few (we still haven’t counted them all) lone fruit trees here and there. We’re assuming both orchards were deliberately planted and the lone trees are from seeds deposited by birds and/or partially consumed fruit cores left by a human. But the spacing of the trees in the orchards is such that they could very well all be wildlings—some are the usual orchard spacing and some are less than a third that distance. To render the most charitable opinion, one would have to say that the plantings were haphazard. Throwing charity to the winds, the orchards look as though they were designed by an LSD addict washing mescaline down with ninety-proof moonshine. Each has apples, plums and pears; one has cherries and a peach tree. Then there’s a lone apricot tree, completely separate from either orchard and downhill from the old cabin site.

None of the trees have had any care for at least twenty and more likely fifty years. The Frost Orchard has a water source, an old hand dug spring that may have been where the first homesteaders got their water, and the trees there have tended to bear despite being heavily shaded, nearly strangled by wild grapevines, and pretty much overrun by blackberries. We tackled that first, since it was closest to the house, and have spent several winters getting it into shape. The trees have presented us with decent crops of fruit, perhaps out of sheer gratitude. The grapevines, however, have been less than enthusiastic about our efforts.

This year we decided it was time to work on the North Orchard. Having collected and sharpened our tools, we descended on it Sunday with the grandchildren in tow, and by the end of the day we managed to get one tree fairly well trimmed. The apple tree we managed to prune either had ten trunks growing from a huge root mass, or ten individual trees had been planted within a six foot space. Since Nature abhors a vacuum, this tree was doing its level best to cram as much into the allotted space as it possibly could. Not only was it laced with blackberry vines and nearly solid with branches and water sprouts; striving for sun, it had braids, twists, and Gordian knots that repeatedly required the Alexandrian solution—with a chainsaw. Before I could begin to select the best scaffold branches, as the professional pruners exhort you to do, I had to get rid of half the tree so I could see what I was doing. And when you’re practically standing on your head to reach the water sprouts, your cuts are not going to be at the properly sloping angle. In that position, I was lucky to be able to make the cut at all.

When I consult my gardening books I read such pearls as: “Be sure that your pruning blades don’t slip and damage the bark of the trunk or another branch.” Between the woodpeckers and insect damage, there are already plenty of holes in the bark; I don’t think mine will make much difference. Or: “Cut out all crisscrossing branches that may rub against each other.” How do you do that when they’ve been rubbing against each other for so long they have grown together into a single branch?

I decided a tree that has stood for fifty years isn’t going to curl up and die because the cuts aren’t perfect. Freedom begins when you tell the pruning mavens to go fly a kite.