Anatomy of a Stain 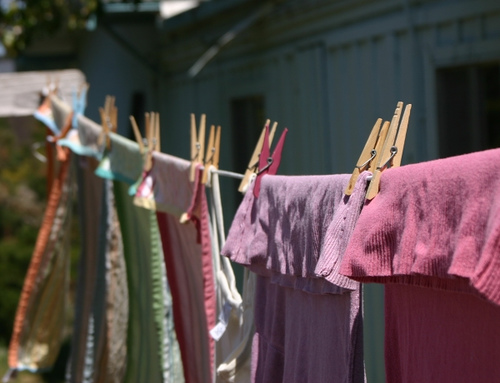 When you live close to the land, dirty clothes become an enduring (and sometimes overwhelming) part of your life. I was musing on matters laundry-related the other day while sorting the piles. Since the grandchildren had been with us for a week while their parents were away on a milling job, the clothes included everything from the good stuff they wear to school to the grubby stuff we all wear day to day. The school clothes are the easiest part; since they are worn only for that purpose and kept separate from the grubby stuff, they can be eliminated from this discussion. But the remainder…

Let’s start with a pair of my jeans. This leg has a large chunk and multiple small spatters of pig slop, the result of my dropping the bucket as I tipped it over the fence to feed. Near the knee of this same garment is the combined grass and mud stain I got when I missed the jump over the irrigation ditch and went down. One of my more embarrassing moments memorialized in denim.

The tee shirt has a large Rorschach blot from Maybelle the milk cow. She decided I needed a wet, sloppy kiss from waist to neck. Animals have never mastered the art of the gentle peck—at least our animals haven’t. They operate on the principle that if a thing is worth doing, it’s worth doing well. This particular blot looks like a sneeze from someone who had been drinking chocolate milk and chewing green gummy worms. This is why I try to only wear black tee shirts.

Now, we have a contribution from my spouse. Being a jack of all trades (and master of many), he spends a considerable amount of time in activities that include grease, oil and dirt. These coveralls look as though he rolled through successive troughs of each, in different order each time: grease, dirt, oil; oil, grease, dirt—you get the picture. Yucky, isn’t it?

Nearly every piece of clothing I pick up has manure of some sort on it, since every animal or bird we feed (and some we don’t, officially—feed, that is) has plenty of what were once called, in polite society, “leavings”. Let’s see, that would be cows, horses, chickens, sheep, pigs, wild turkeys (they’re the ones who aren’t official), dogs, cats, foxes (also not official and they’d better stay away from the chickens!)—oh, and the bear that is raiding our blackberries.

Then there is resin—the kind that comes from tree sap, not the kind that comes from a can. What with brush clearing, firewood gathering and lumber milling, there is nearly always a glaze of the stuff on work clothes, and it is probably one of the hardest things to get rid of. I suppose if we soaked things in solvents for a few hours first…nah, probably just make them flammable.

Finally, there are the play clothes of the two youngest, especially the three year old, who—like her grandfather—just loves to play in the dirt. While he does it at one remove with tractors, backhoes and such, she gets up close and personal. Actually, I really think she just lies down and rolls in it; I know she pours it over her head because I’ve seen her do it.

The best illustration I can give you related to laundry day is the phone call I got from my daughter when she bought a new and rather fancy washer with a see-through lid: “Mom, you can see the clothes go around in the tub! Oooh, and there’s a little extra water being squirted on the clothes…and there goes the soap… ”. What can I say—you live out in the country, you learn to make your own amusements!