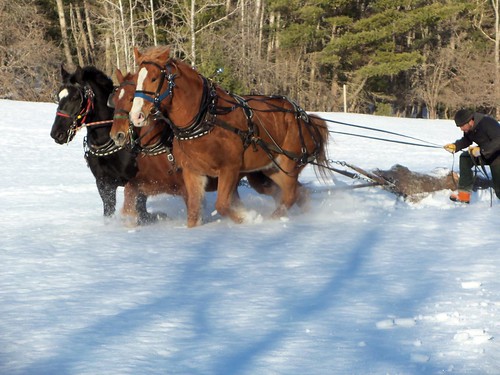 We try to convince all of our critters from a fairly young age—or as soon as we buy them—that we are the boss. While we will do nice things like scratching an itch or feeding them goodies, we expect them to be well-mannered at all times and are not above scolding or smacking them. In most cases, because they learn early to accept our dominance, a scolding is all that’s necessary. But, like children, animals are individuals, and some need more or less discipline than others.

We had one brood mare who could not even tolerate a scolding. Luckily she was almost invariably well-mannered. Her colts were the sort you never, ever smacked—a firm “No!”, or very rarely, a gentle scolding, was all they needed. My old saddle mare, on the other hand, was the type who given an inch would take half the county. She would periodically decide she was not going to load in the horse trailer. I would have to get out the stock whip and pop it in the air a couple of times (I never actually had to hit her with it); one pop and she couldn’t wait to climb in that four-wheeled box she found so intimidating a moment before.

While you should always treat your animals with kindness and respect, there are times when you must do something they don’t like for one reason or another. If the animal thinks it’s the boss, all too often one or the other of you then winds up hurt. When it’s a 700 pound cow or an 1100 pound stallion being obstreperous, it’s not usually the animal who gets hurt.

A few days ago, Maybelle the milk cow and I were having a less than amicable interaction about whether she would wear the halter—she finally shoved her head in the halter and in the process shoved my left hand against the barbs of the wire fence, lacerating a small vein. Since I had not yet fastened the halter and didn’t want her to think she could get away with her behavior, I was unwilling to try to staunch the wound; blood flew like rain for a few minutes while I swore at and struggled with the recalcitrant cow. Eventually my husband was able to subdue Maybelle and hand me a handkerchief.

Our stallion is about as mellow as a stud horse can get, but he’s a greedy thing and pushy about his food. He was bound and determined to come in the milking pen the other day because he just knew Maybelle was getting more than her fair share of grain. She may have been getting a little extra, but she had just given us two gallons of milk and was entitled to a reward. My husband was trying to get out of the gate as Sox was trying to shove his way in, and the stud was insulted no end when my husband finally popped him lightly on the end of the nose with the leather milking belt.

When it comes to animals, you can discipline or be dominated; take your pick.