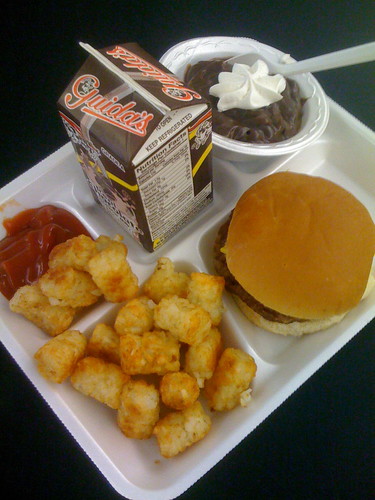 The headline read: Iowa Parents Revolt Over ‘Big Brother’ School Lunch Monitoring. According to the accompanying story by a contributor named Katie Drummond, Iowa’s Healthy Kids Act “requires schools to reduce the fat and sodium in children’s lunches… will also eliminate carbonated soda and deep-fryers and replace white bread with higher-fiber options… The Iowa law does, however, require that kids select items from at least three of the five food groups: grain, meat, dairy, fruit and vegetable, which the system would ensure” (italics mine, because I can’t find wording in the law which does in fact stipulate this food selection requirement). The school district is tracking the “overall consumption of food”, according to a school district spokesperson, to see if it meets state guidelines for nutrition. Individual student eating patterns “are not being tracked”. Then why do kids need PINs?

FoxNews ran a similar story, with an additional comment: “But Marc Rotenberg, executive director of Electronic Privacy Information Center, a privacy and civil liberties advocacy center, said there is a growing trend of schools collecting student data and that schools need to be open with parents about what they’re doing with that student information. ‘…it’s obviously more than just debiting of student account, it’s about tracking what kids are eating in kindergarten,’ Rotenberg said. ‘It’s also kind of weird to teach kindergartners how to remember PIN numbers so they can get lunch.”

A tempest in a teapot? Maybe.

The real importance of this move, to my mind, is whether a government organization, paid for by our taxes, should have the right to dictate what our children eat. For that matter, why should they even know what our children eat? The National School Lunch Program was ostensibly developed in 1946 to ensure that children could get at least one good meal a day no matter what their economic status. I say ostensibly, because: “The educational features of a properly chosen diet served at school should not be under-emphasized. Not only is the child taught what a good diet consists of, but his parents and family likewise are indirectly instructed. (Quote from the USDA website)”. Sounds good, right? Except that the “properly chosen diet” was not determined by the parent, but by the government, which was beginning to have a lot of food surpluses after the conclusion of WWII. So such things as wheat flour, corn products, milk and cheese became mainstays of the program.

I realize there are plenty of children whose only hot meal of the day—and maybe their only meal, period—is what they eat at school. I am by no means advocating that we stop the program or that the food should consist of soda pop, candy and white flour. But the key is to assure the schools provide nourishing food, and that can be done without tracking what individual students eat. The biggest fuss in Iowa, according to the above articles, seems to be over the use of PIN numbers for young kids—why isn’t anyone raising Cain about the intrusion of the school district into the parent’s responsibility both to feed and to educate their children about good food? Marc Rotenberg asks: “What exactly is the point? Seems like there’s a much less intrusive way to meet this goal.” And this man is CEO of a civil liberties organization! To my mind, he’s not even asking the right questions. Why should schools be “collecting student data” and exactly what are they collecting? Why should the school need to meet this “goal” in the first place? Who does it serve to monitor food choices (not the parent, certainly, and probably not the child)? Once they have this data are they going to start sending home report cards about Johnny’s nutritional choices? Is this a good use of our tax dollars?

The purpose of a school is to educate children (and based on the current track record of many of them, they aren’t even doing that basic task reasonably well). Let us, the parents, worry about what they eat.