The Fine Art of Coggling 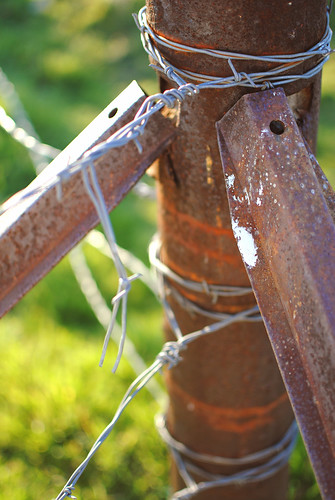 I confess, I am a coggler.

Coggle, according to the various dictionaries I consulted, is Scottish for “unsteady”—“something that wobbles or rocks”. I find that interesting, as I have always used the word as a derivative of “cobble”, which apparently means, first, a rock of some sort, and second, “to make or mend”. It also means to put something together clumsily, which can certainly apply to coggling. But done properly, coggling can be high art.

When you live on a ranch, something is always breaking, usually when you’re in the middle of a project that doesn’t lend itself to being set aside temporarily while you fix what has just broken. For example, you’re sorting cows (keeping some in one pen while letting others go through the gate to a second pen), and the gate hinge breaks. Fixing the gate means taking it off its hinges, removing the broken hinge, scrounging or buying a new one, screwing it back on and rehanging the gate. Meanwhile, the cows you were sorting have left for the next county, if not the next state.

So you coggle. In my youth, we mostly did it with baling wire. Baling wire is wonderful stuff—flexible, cheap, sturdy, and strong. A triple strand of twisted baling wire would probably tow a locomotive. If you bought or baled hay, you always had lots of baling wire. Now that most bales of hay come tied with twine rather than wire, baling wire is starting to go the way of the dodo bird. When baling wire was used for baling hay, it was almost invariably in the bed of the pickup, hung on the fence, chucked into a pile near where you were working, or generally readily available. Baling twine, on the other hand, seems to collect in a pile near where it is cut from the bales and just dropped. It doesn’t migrate the way baling wire did. Baling wire was also easier to untwist quickly if you were doing something like wiring a section of pig fence together and discovered you’d left a nose-sized hole somewhere. Pigs love to stick their snouts through things, and quite often, the rest of the pig follows. Twine works—sort of—but it’s a lot harder to fasten tightly because you have to knot it rather than just twist the wire, which automatically made your repair job tighter.

The technique of coggling can be applied to many other situations. Fixing the barn roof and the ladder is too short? Get the backhoe, put one end of the ladder in the bucket, and lift the ladder higher on the roof with the backhoe bucket. Tailgate on the ranch pickup won’t stay closed? Coggle it shut with a bungee cord. In the days when everyone tried to spend the minimum amount of money (because they had so little of it) and make do with what they had, coggling was the norm. There’s a difference between coggling and recycling—which is very much in vogue these days and is admittedly a good thing. But I would say recycling is more about “I have this, what can I make from it?” and coggling is more about “I need to fix this and what do I have that will work?”

Admittedly, coggling is not necessarily neat or pretty. If you could see our coggled milking pen or the old tarp I screwed into the posts to replace the section of barn wall that isn’t there anymore, I’m sure you would agree with me that it’s not what you would call attractive. But it works, and that’s the important part. In today’s buy-a-new-one- toss-the-old-one-everything-has-to-look-just-right-all-the-time world, I think people have lost something. Our resources are not endless (nor are the planet’s) and there are always times when money is not plentiful. A little judicious coggling can help.

This entry was posted in Farms, Money Matters. Bookmark the permalink.