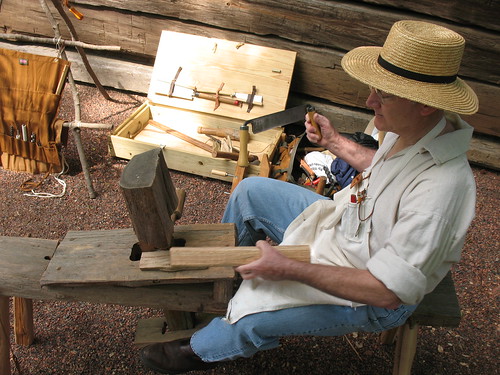 When we first bought Maybelle the cow, we did not have anything like a barn or building in which to milk. During the summer that was no problem, and we planned to build something before winter set in. What with one thing and another (the normal state of affairs on a ranch), we are a bit behind schedule. The pier blocks have been waiting near the new site for several weeks now, and the lumber—milled by the second generation with a Wood Mizer—has been stacked and seasoning. My husband bought the few things we needed that we couldn’t make ourselves and we were ready to go.

Despite over thirty years of marriage and numerous carpentry-type projects, this is the first time we have ever built something from scratch. All of our former work along this line consisted of minor things like adding an eight-foot square woodshed to an existing small building, or the admittedly larger remodeling projects we undertook on the old house. While tearing out one wall at a time and jacking up the ceiling joists was not exactly what I would call a minor project, it was still about remodeling rather than building from the ground up. So I had a lot to learn.

Pier blocks provided the basic foundation for our new milking shed, and I thought setting the pier blocks would be the easiest part. After all, how tough could it be to set these little doo-hickeys on the ground? Silly me. First we had to get the ground as level as possible. The backhoe was wielded by my spouse to provide a relatively flat surface. The blocks were muscled into place, and we got the straightest board we could find from the pile. Then we set the board across each row of blocks, checked the level, removed the blocks one at a time and either scraped off more dirt or shoveled more in and tamped it down. We did that about thirty times for each block.

Next step was to check for square: measure the exact length and width, then measure the long angle corner to corner. Whoops, we started that measurement on the corner of the pier block, not the corner of the wooden attachment on top. Another thirty adjustments. Check for level again. Darn thing is off. More adjustments. Hey, this beam is crooked! No wonder we can’t get it level. More revisions, a consultation with the younger generation, and finally, it’s square and level to within a quarter inch all around. My husband screwed a long cross board down to the beams so wandering cows, calves and stallions couldn’t disrupt our careful work, and we headed to the house for dinner.

Today we put up the first three uprights. This is a modified pole barn, in that the upright posts are all poles and the rest will be milled lumber. The poles, cut and peeled, were stacked at the site a few weeks ago—they were the first component we had ready. We have three huge beams across pier blocks that the two men man-handled into place; they were way out of my weight-lifting league. We carried the poles close to each beam, then my spouse bearhugged and lifted them onto the beam while I steadied them. Then we got out the post level. I’ve been in the position of assistant carpenter many a time over the years, but for some reason had never run across one of these handy little gadgets before. It’s a right-angle piece of plastic with three bubble levels, one on each side and one along the vertical spine. You put the level on the post so that the two angled pieces hug the post, fasten it there with a rubber band, and tilt the post in various directions until both horizontal bubbles line up between the lines of the level. Sounds easy, huh? Well, the rubber bands weren’t big enough to go around the posts, so I had to hold the level in place while I tilted a fourteen foot tall pole, while watching both bubbles, while my husband tapped the bottom of the pole with a hammer to keep it aligned with his pencil marks. At the same time I had to provide a stabilizing knee against the pole so he could put the screws into the pole and the T plate that was attached to the beam. I felt like I was trying to chew gum, jump rope and rub my stomach at the same time.  As a result, the poles lean just a tiny little bit.

Now I have to say that when my husband builds something, he builds for the ages. Not for him the shoddy or the jury-rigged. The beams supporting the structure are eight by eights, the floor joists are two by eights and the flooring is two inches thick. Since these are all custom home-milled boards, they are a full two inches, not the much thinner stuff you get when you buy commercial lumber. By the time we get done, I suspect you could lead an elephant across the floor and it wouldn’t even squeak. (That’s the floor that wouldn’t squeak, not the elephant.) The screws are heavy duty steel and four inches long.

I’m sure this milking shed will outlast us and may still be in good shape by the time our granddaughters have grandchildren.