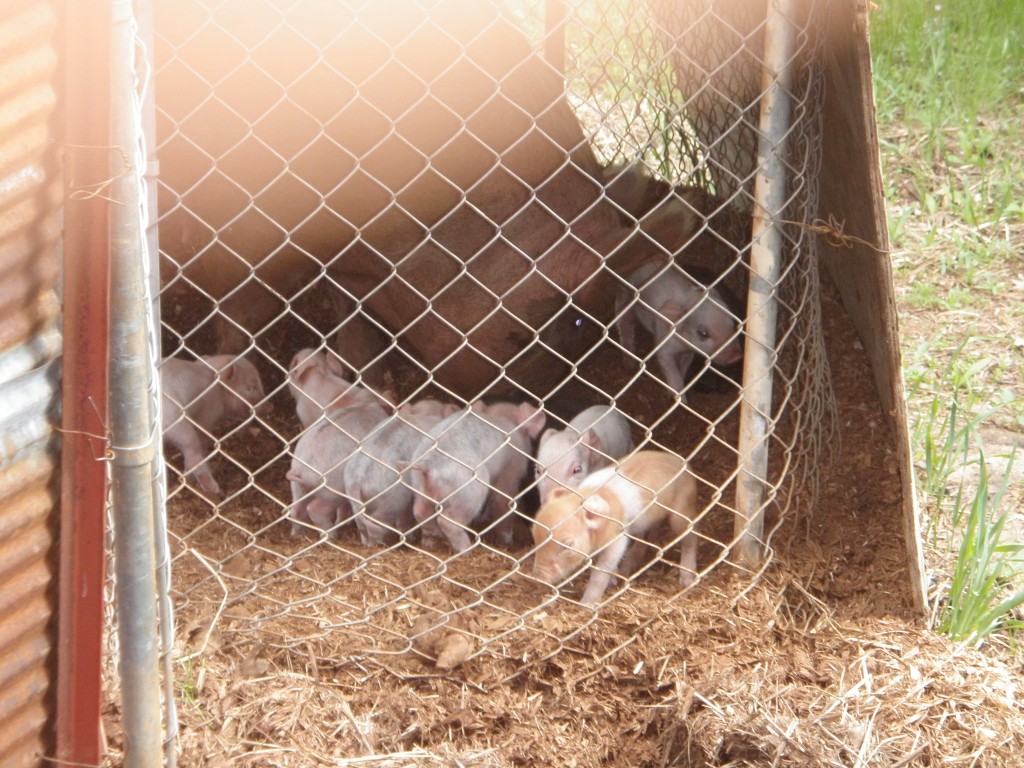 Last night we suddenly went from having three pigs to having fourteen pigs.

The sow started to farrow—with impeccable timing—just as we were about to head up the drive to take my stepmother to an early Mother’s Day dinner. We had been fairly sure she was close, as she had been off her feed for a day or so but drinking lots of water, and this normally sociable sow who comes grunting to the fence for treats had spent all of her time in her shelter, twitching an ear to our blandishments but ignoring even the proffered carrots she loves. Given that it was her first litter, and that the second generation had no experience with pig midwifery and little experience of animal midwifery in general, it was quickly apparent that somebody had to stay home and keep an eye on the process. After a bit of back and forth, I sent my husband off to dinner, since he had been mowing all day and had gone without lunch; I knew that the midwife wasn’t going to get to eat for a while, if at all. So the granddaughters and I settled in to watch over Pinky.

She was delivering babies at the rate of about 1 every 30 minutes—too slow for the little girls, who would circulate up to the house for a while and then come back to sit with me again. The middle child was lucky enough to actually see one piglet born; and while she obeyed the admonishments not to make a lot of noise, I could feel her vibrating with excitement. Finally she couldn’t stand it any more and tugged my sleeve. “Nana, how old do they have to be before I can take one to school for share?” We settled on pictures rather than actual livestock and she went tearing into the house to bring everybody else up to date.

By this morning, we had 11 live piglets. The runt was born dead, and the sow managed to either step on or crush another—not surprising given how many she had. All the others were active and nursing, and mama seemed to be wearing a rather smug piggy smile. She has turned out not to be an over-protective or aggressive mother, which is good, especially with small children on the place; pigs can be vicious in protection of their young. I called my stepmother to apologize for missing dinner, and she laughed. Having been a ranch wife in her youth, she’s had similar experiences.

She did say, however, that this was the first time she’d been stood up for a pig.