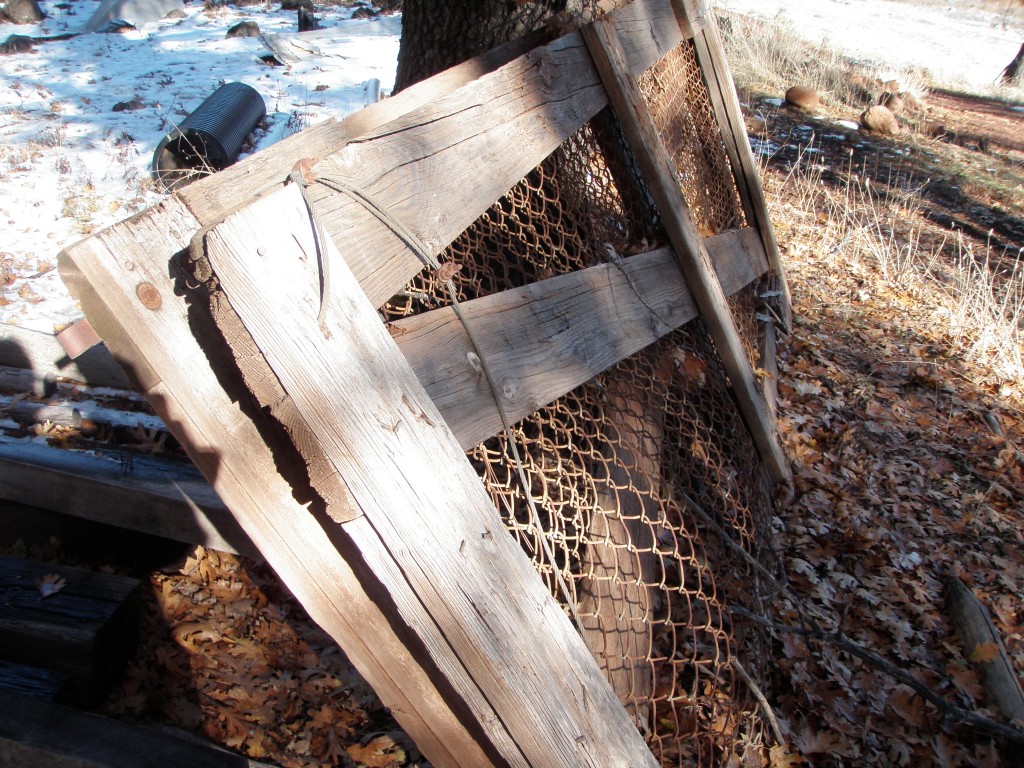 The classic sentimental stereotype of farm life includes white wooden fences, green pastures, neat garden rows and freshly painted buildings. While there are certainly many farms and ranches that display those characteristics, the one thing that never seems to be in the stereotypical picture is the junk pile. And yet every farm has one, or should. It is from the junk pile that one extracts a short length of timber which is just right to temporarily mend the hole in the corral fence. The roll of hog wire salvaged from an old fence you tore down can be combined with broken metal fence posts welded together to create stout, reusable trellises for the pole beans. Chunks of concrete can be turned into stepping stones or fill for potholes.

My readers will know of my fondness for coggling, a skill in which something is pressed into service to fix something else, or used for a purpose that was not considered in its original design. Coggling is nearly impossible without a functioning junk pile. I use the term “functioning” deliberately here.

A functioning junk pile is organized. Related items, such as the old tin ripped off the barn roof in a high wind or the useful fence posts pulled up during the last go-round of fence replacement, are stacked together. Whenever the junk pile owner goes past, she casts an eye over the largesse. This is partly to assure herself that nothing has disappeared, and partly to keep a running mental inventory, so when the sheep need a temporary shelter, she will remember the old chain link dog kennel reposing in the junk pile.

A functioning junk pile contains a wide variety of potentially useful items. In ours, for example, there are two hand-built gates with wood frames and chain link stapled to the frames. While the wood is probably not useful for more than kindling at this point, all those gates need is new wooden frames, as everything else in them can be recycled. It will be the third reincarnation for the chain link. It began life as a bull pen fence on the ranch where my husband worked, was torn out and given to us, then straightened painfully by hand to build these gates.

A functioning junk pile is used to accumulate materials for a specific project. In our junk pile, you will find barrels of many sizes, both plastic and metal. You will also find a pile of worn out grader blades. These are just the thing for building a pole barn—you sink a barrel into the dirt, set a grader blade in the middle, fill the barrel with concrete, and bolt your uprights to the grader blade after the concrete has set. There are pieces of rebar in various sizes, left over from our projects or scavenged from someone else. There are two airboats, complete with fans that could probably be coggled into a small windmill. There are short sections of hog panels, some a little bent.

A functioning junk pile is not necessarily all in one place. Some things need to be kept under shelter or away from chewing critters like mice and rats, such as the currently unused horse gear made of leather. Some things are small and should be kept in a box or drawer where they can be easily found. One of my personal junk pile components is glass jars in a wide variety of sizes, stacked outside but relatively near the kitchen where they are quickly retrieved for canning, herbal decoctions or seed storage. The little jelly jars that were made for the old-fashioned days of sealing with paraffin also make good drinking glasses.

I admit I was a late-comer to the joys of a junk pile. For many years my husband and I had a running dialogue about the stuff he kept dragging home. It was partly because his tendency was to build the junk pile where it could be seen from the kitchen and living room windows. Mostly it was because I had grown up in a family that had the wherewithal to just go buy things, while he grew up poor and had learned to make do. We had a system in which he dragged stuff home, I tolerated it for a while and then started to nag about it. Eventually I become more aware of the issues related to non-renewable resources and basic frugality, which effectively shut me up and made me just as inclined as he was to drag stuff home. But that’s another story…

This entry was posted in Farms, Money Matters. Bookmark the permalink.