What Do You Call a Farmer? 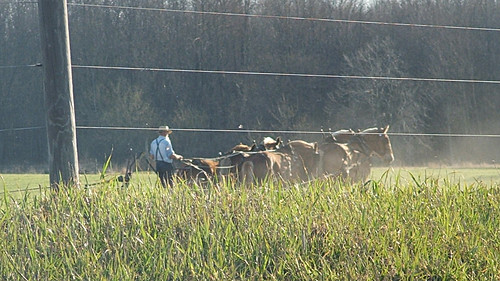 “A human being should be able to change a diaper, plan an invasion, butcher a hog, write a sonnet, design a building, balance accounts, build a wall, set a bone, comfort the dying, take orders, give orders, cooperate, act alone, solve equations, analyze a new problem, pitch manure, program a computer, cook a tasty meal, fight efficiently, die gallantly. Specialization is for insects.” –Robert Heinlein, in The Notebooks of Lazarus Long.

If Rodney Dangerfield had been a farmer, he could considerably expand his repertoire of “I don’t get no respect jokes”. Farmers and ranchers are seen as clodhoppers, people with mud on their boots and hay in their hair. The list of derogatory terms is sadly long: hicks; rednecks; hayseeds; hillbillies; shit kickers; crackers. The common assumption is all too often of an uneducated, unskilled manual laborer who couldn’t succeed in the “real world”. This despite the fact that in addition to such mundane farming tasks as collecting eggs, shoveling manure or irrigating pastures, a farmer may, in a twenty-four hour period, act as mechanic, veterinarian, gardener, carpenter, plumber, mason, animal trainer, welder, cook, bookkeeper, or electrician—all skills for which most of us would pay a pretty penny in that aforesaid real world. It takes a very smart person to do all those things and do them well. More, it takes dexterity, judgment, strength, creativity and determination. Farmers are truly versatile.

We could call a farmer a “jack of all trades”. Unfortunately, the term carries with it the unspoken implication: master of none.  I admit I’ve never really liked the phrase; the inference is of someone incapable of sticking to a task, and it leaves out the females, who are just as capable of farming or ranching as the males. Worse, it seems to say that being a master of a single skill is better than being able to do many unrelated things. And yet, consider. Why should becoming an expert in only one field confer higher status? Perhaps it narrows—limits—rather than expanding horizons. Does mastery cause a closing of mental doors? What if the unknown (which may provide brilliant insight), is discarded when compared to the known, because it doesn’t seem to fit in the accepted order of knowledge? What if the constant effort required to learn new skills causes exploration and travel of neural pathways left dormant when one knows the road? Becoming a jack of all trades requires flexibility, a willingness to take risks, expansion of mental horizons, and transference of skills into unrelated areas. Competence is attractive, exciting, stimulating—dare I say erotic? Multiple competencies are more so.

At the end of Europe’s Dark Ages, something new arose and flourished on the continent. Great strides were made in all disciplines—art, science, literature, education, medicine, music and religion.  Certainly there are some people who have a real genius for a particular field of endeavor. Yet Michelangelo was a great artist whether he worked in stone, marble, paint or bronze, on canvas or on plaster. He certainly didn’t limit himself, even within one field. Would you call Leonardo Da Vinci a jack of all trades? Or would you think of multidimensional talents? Perhaps what is needed is a new term for someone who can do a lot of things reasonably well. “Renaissance man” has already been taken, and what about the women?

This entry was posted in Farms, Freedom. Bookmark the permalink.

3 Responses to What Do You Call a Farmer?