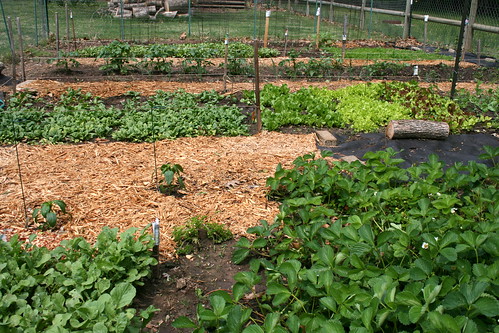 While I don’t know how good their crystal ball is, the folks at MSN Money are making predictions about food costs in 2015. Apparently $40 billion in current grain costs have yet to make their way into the system, so we can look for increases in food prices ranging from 3 to 8 percent. Read the details here: http://money.msn.com/how-to-budget/what-will-food-cost-in-4-years-minyanville.aspx?cp-documentid=6792953>1=33029. Anyway, the article got me to thinking about what my food costs, so I ran some comparisons. First on the list was bread—the staff of life. In 2015, we can expect it to cost an average of $2.16 a pound (these were prices in Northeastern stores, by the way). We have a small mill in our town, so I can buy organic whole wheat flour for about 77 cents a pound. Or I can grown my own, which might cost me 10 cents a pound, since I don’t use petroleum-based fertilizers, have irrigation water from a spring that is gravity fed, and use open pollinated seeds that I can save from year to year. And my bread tastes a heck of a lot better than store-bought stuff, too. Milk, say the pundits, will go up about 4% to $3.86 a gallon. My cow gives an average of two gallons a day, plus what the calf takes. She eats grass and hay, and gets a milking reward of about two pounds of screenings—what’s left after grain is ground. It’s not really a critical component of her diet and she could do without it. We feed mostly grain hay—oat, wheat, barley or a mix—and she also gets a flake of alfalfa when we lock her up at night. We might spend $4 a day on food for her, so my milk costs $2 a gallon. Of course, I also get butter and cream from that as well, rather than buying them separately from the dairy case. Like the bread, it’s better tasting, and since it hasn’t been pasteurized to death, it’s full of nice healthful enzymes and vitamins. Ground beef? We would calculate that about the same as the milk cow, but since there’s about 35% percent waste in the butchering process, and we pay a butcher for the processing (we’ve done our own in the past, but I finally nixed that after my dearly beloved got out the skill saw to cut the bones and put a big gouge in the dining room table), that final pound of beef probably runs me about $2.85 a pound. The grocery store version will be $4.71 by 2015. Again, my beef, like my milk, has no hormones, antibiotics, steroids and such. Chickens—now, here’s where I can really clean up. We feed our chickens screenings, same as the cow, plus clabbered milk, food scraps, garden surplus, and whatever bugs and such they can catch on their own. I also save meat scraps and offal from the butchering for extra protein. Eggs cost me maybe $1 a dozen; chickens for meat run less than $2 a pound if I butcher surplus roosters that we raise, and less than $3 a pound if I buy something like Cornish Cross chicks. That’s still quite a bit below the $4.37 a pound predicted for the store version. And yes, you guessed it, no hormones, etc. As for the rest of the stuff in their market basket, I could go on about the difference in fruits and vegetables—my asparagus costs me absolutely nothing but the time to pick it and a mulch of leaves or used sheep bedding; apples are 100% free, as the trees are not even irrigated. At that rate I can easily afford the 8 cent rise in bananas. And I could care less about vegetable oil margarine, as I have plenty of butter, which I make myself in the big Kitchen Aid mixer. I don’t drink beer, although other members of the family do, but I did buy some barley seed and hops this year, so I’ve even got that area covered. While there was no data on pork, my pork costs less than $3 a pound, after butchering and curing fees are added in. it’s not quite as good a deal as the beef, but you don’t have curing costs for beef. How about you readers out there – what does it cost you to produce your food?