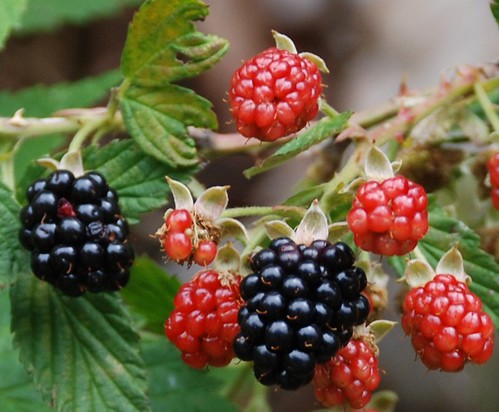 Blackberries, members of the Rose family, are brambles with spreading habits and vigorous growth. Blackberries are aggregate fruits (although technically they are not berries in the botanical sense of the word, as a true berry is a fleshy fruit produced from a single ovary. WikiPedia says “Aggregate fruits form from single flowers that have multiple carpels which are not joined together, i.e. each pistil contains one carpel. Each pistil forms a fruitlet, and collectively the fruitlets are called an etaerio. Four types of aggregate fruits include etaerios of achenes, follicles, drupelets, and berries… Rubus species like raspberry [and blackberry], have an etaerio of drupelets.” I think that’s more than I really wanted to know, and I will continue to call them berries.).

Many California ranchers consider blackberries to be the kudzu of the West Coast. The thorny thickets are signs of poor management and abandoned ranches, but they also often indicate a good water source, particularly when they are luxuriant. They possess a four-point arsenal for insuring survival of the species, being spread by seed, tip rooting, pieces of rhizomes, and crown sprouts. They are hard to kill, harder still to grub out. The University of California at Davis will tell you that none of these methods are particularly satisfactory, even in combination: herbicides (some plants are starting to show signs of immunity—imagine that!); burning; mowing; bulldozing; tilling. Not to mention that while you are busy with the bulldozer, there are all sorts of birds spreading more seeds at the speed of sound.

Our ranch has been neglected for over fifty years, and the blackberries had used that interval to do what they do best—take over. The fences were badly infested in those areas where there was water enough to support them. The bushes, however, did provide nearly as good a barrier to the broodmares—in some cases better—than the sagging posts and rusted wire. The old barn was covered nearly to the rafters; between blackberries and the old grapes (another prolific spreader), the orchard was nearly strangled. Much as I hated to use chemicals, we started with a thorough spray to knock the devil vines back. Some patches were then chopped into fine mulch with the flail chopper, seeded with pasture grass and irrigated. Others were burned. We know that this is no more than the first step, and we will be fighting a holding action forever—all the areas show some signs of regrowth. Still, we had to start somewhere.

But in one location we had to defer to the devil—I mean berry. There is a large pond, perhaps 2 and-a-half acres, next to the big meadow. The embankment runs east to west and is nearly solid with blackberry brambles in thickets twenty feet high where they grow up the north face. Even on the south side they are seven feet or more. Can’t dig them out, or the dam will go with them. Can’t spray, or we get the chemical in the watercourse. Can’t burn—too wet, and we figure we would have to drain the pond and leave it empty for at least two years to get it dry enough to burn. So, since in this case the blackberries are inevitable, we have fallen back on the old axiom to relax and enjoy them.

2 Responses to That Old Devil Vine