Lessons on The Feeding of Pigs 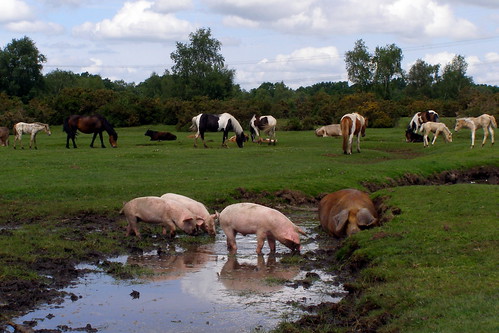 I cleaned up the last of the peas today so I can pull the vines tomorrow and feed them to the pigs. Pigs relish all sorts of garden refuse like that – our pigs also love plum tree shoots and will eat them down to the last leaf. Not to mention leftover food scraps, the hard green apples and pears from thinning the fruit trees, ground squirrel carcasses and the occasional rattlesnake. The term omnivorous (which I translate as “will eat anything and everything”) was clearly coined with pigs in mind.

So I was disappointed to learn in a conversation with one of the 4H moms whose kids did swine for this year’s fair that the leaders of the swine groups push conventional feedstuffs and show finishes in lieu of other, less expensive foods. This mom was paying $14 a bag for pig food and feeding 2-3 bags a week, plus supplements. We buy grain screenings – the stuff left after the grain is ground – for 14¢ a pound. Every morning I dump three #10 cans of screenings in a bucket, mix it with water or excess milk and let it soak for about 12 hours. The sow and the boar each get one bucket, the piglets get the third. Once we wean the piglets, in about two weeks, they will get two buckets a day in two feedings. The pigs love it, gain well and are healthy.

It’s so sad. Why don’t swine leaders teach kids that there are alternatives to conventional feedstuffs? They get roped into the Monsanto-world while they’re still young and impressionable, and by the time they reach adulthood, they think there’s only one way. I don’t understand this predilection for putting things in nice tidy boxes and tossing out the round pegs because they don’t fit in square holes. How much better for the world, the kids, the learning process and the animals if we could admit that there are multiple ways to skin a feline (apologies to the cats!) and try different strategies.

Being the subversive soul I am, I’m seriously thinking about getting one of the grandkids to raise a pig for next year’s fair. At the prices buyers pay for those fair animals, we could really clean up!