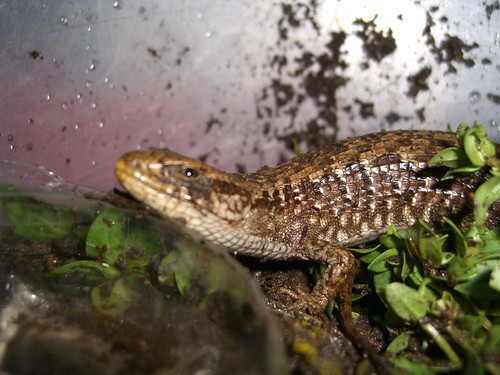 We milk the cow, at the moment, in a small corral about 16 feet square. (We have the lumber milled to build a milking shed, but that’s another story.) So we are out in the open, with nothing to do but look around and talk while Maybelle does her thing for our food supply. We were sitting there one day, chatting idly (my husband and I, not the cow and I), when I happened to glance at the small irrigation ditch which runs through one corner of the milking pen to supply the cow with water. We had an audience: eight beady little eyes seeming to float on the surface of the water. Four young bullfrogs, washed out of the largest pond or perhaps infected with the urge to explore the big world, had taken up residence in a small pool a couple of feet across and about a foot deep. The entire time we were milking, the little frogs simply watched. One wonders what was going on in their tiny brains.

The frogs’ surveillance made me realize there was a whole microcosm of farming occurring in the 256 square feet bounded by Powder River fencing panels. We have soil, which grows a little grass where it is watered by the irrigation ditch (crops). The cow, being well fed and in good health, drops liberal piles of fecal material, upon which feast thousands of flies, ants and other insects (animal husbandry). In the pen are permanent residents—a lizard and the young bullfrogs—and transients such as the starlings and wild turkeys which come to nip off the tender young grass shoots, gobble leftover grain and catch slow insects (harvest).

We had a good solid rain in early September—nearly two inches—and perhaps as a result, there has been an explosion of flies. In addition, wasps and hornets have proliferated, as have the horseflies. If you are a city dweller reading this, you may not be familiar with that last insect; imagine a black housefly half as long and as thick as your little finger, with shiny black wings, a yellow head and shoulders. They bite quite painfully and suck blood from the wound. A horsefly can send our horses bucking and careening across the pasture as they try to outdistance the annoying pest. In addition, horseflies are hard to kill with a tail or even a hand swat—usually we have to knock them to the ground and then step on them or they will just come right back. The hornets also buzz around the animals but don’t bite or sting them; they are in pursuit of wasps, which they kill by biting off the victim’s head, carrying off the remainder to provide food for their larvae.

But it is primarily the flies and gnats which are the driving force in this tiny Eden. The flies come in two sizes, housefly size and an economy model about two thirds smaller. They crawl on the animals, cluster around eyes and ears, and buzz in our faces. The cow uses her tail to good effect, and occasionally twitches her skin or shakes her head to rid herself on the little nuisances. But she rarely actually kills one, so her efforts have no lasting impact.

Enter the bullfrogs. Once we have finished milking and the “monsters” have left the pen, the little frogs come out of the water. It’s not easy to see a small greenish-brown frog against a backdrop of greenish-brown manure; it’s only when they move that their presence becomes noticeable. They perch on clods and clumps, patiently waiting until an unwary insect comes within reach, and then snatch-gulp, “breakfast is served”. Their territory seems to be bounded by the moist earth—I have not seen them come into the drier ground of mid-pen. They leave the more arid environs to their neighbor, the lizard.

Elgaria coerulea shastensis, the Shasta Alligator Lizard, does in fact look just like a tiny alligator. Like their namesake, alligator lizards are fierce when threatened and will bite. The one that lives under the rocks near the milking pen is a fine specimen, about eight inches long, generally more interested in the food supply than the humans nearby unless we move too suddenly or get too close. He (or perhaps she—it is difficult to determine the gender of a lizard) also eliminates a fair number of the flies, and being inclined to larger fare on occasion might just make a meal of the smallest bullfrog, which may be why the frogs limit their explorations. I was watching one morning when a starling, also attracted by the potential for insects a la carte, happened to land about a foot away from the lizard. Each attempted to stare down the other. When that was unsuccessful, the starling tried hopping closer. The lizard did pushups on its rock, hissed and generally attempted to convey the idea that starlings were not welcome. The starling, being apparently a pushy type, continued to intrude. Finally the lizard about-faced and took himself off to the safety of the space under the water trough, doubtless muttering imprecations in Lizard about invasive avian species. Still, he should have been glad it was a starling and not the three-foot gopher snake that occasionally wanders through as we milk—he could have been breakfast!