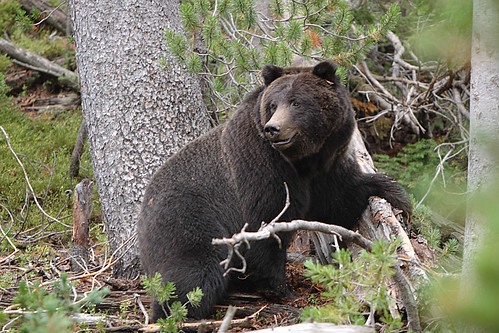 He in this case being the bear that has been hanging around our place for the last few months. Or maybe it’s bears. We’ve seen tracks, fecal leavings and evidence of his depredations. Not to mention the power pole on which he has scratched claw marks higher than my six-foot tall husband can reach. I say “he” without actually knowing the bear’s gender, but given the size of the tracks and height of the scratches, the odds of a male are high.

When you live in the country, you might as well make up your mind to deal with wildlife. Some of them, like quail, are fun to watch and they eat little. Others like deer, wild turkeys and bears, can and will destroy gardens, eat hay or grain, destroy beehives and decimate orchards. And a few, bears included, can be downright dangerous. Bears and cougars are the two major hazards we face from the wildlife around the ranch, although we do also have to watch out for rattlesnakes. And a buck deer can use its horns to lethal purpose.

The bear in question was apparently attracted by the grain screenings in the bucket we keep at the milking barn for our cow. Not only did he eat every particle of grain in the bucket, he ate the bucket. Chewed it into fragments smaller than the palm of my hand and left perhaps half a dozen. The remaining fragments apparently now reside in his belly, as we couldn’t find them anywhere. So we have rearranged things to keep the bucket where the bear can’t find it. Otherwise, we go our way and he goes his, and we manage to co-exist on a peaceful basis.

The worst wildlife problem we have, though, is – surprisingly – the ground squirrel. These furry little machines of destruction are the reason we do not kill rattlesnakes on sight. Ground squirrels dig burrows – like prairie dog holes, they are a hazard to the legs of fast-moving animals. If big enough, they are also great places to drop a four-wheeler tire and break a spring. Ground squirrels climb things, including trees – my daughter called over one day to warn us not to be alarmed if we heard gunshots, she was just shooting the ground squirrels out of the apricot tree where they were eating the blossoms. Ground squirrels are extremely opportunistic. We have one kind of woodpecker that lives in colonies; the adult birds spend most of the daylight hours drilling holes in wooden buildings so they can insert an acorn for storage and later retrieval. Quite often they miss the fact that a hole already has an acorn in it, and try to insert a second acorn. The first acorn falls down inside the building, and the ground squirrels – who have been lurking around for just such an occurrence –steal it, saving themselves the labor of doing their own collection. Ground squirrels also chew things: fence posts, grain bags, plants, ripe (or unripe) vegetables and fruit, boxes, hoses – anything that is standing still or even moving slowly. We shoot them, which doesn’t make much of a dent since they reproduce quickly, but the rattlesnakes and other big snakes like the gopher snake make a habit of invading the burrows and decimating the population.

You have several choices when it comes to the wild critters: fence them out when possible; use dogs, noise or other repelling tactics; and finally, if they’re dangerous or destructive enough, you kill them. It’s a matter of balance, and of knowing whether you can live side by side or need to take lethal measures to keep your family, animals and crops safe. Oh, and never underestimate the power of a furry little rodent.