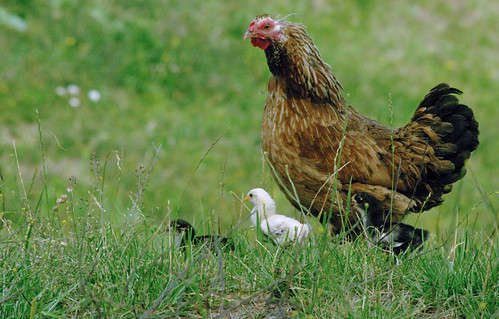 I spent most of this morning making chicken balls. No, for those of you with dirty minds, chicken balls have nothing to do with sexual organs – you go play in the gutter. Nor are the toys for the chickens — I let my chickens amuse themselves. Nor are they, as the name might seem to imply, ground up chicken meat.

Chicken balls are made from the ground scraps of meat left over from butchering an animal. In this case, it was the cow we butchered last month. She weighed in at 745 pounds of butchered meat. While much of that is now in the freezer in nice neat packages with labels like “TriTip”, “T-bone Steak” and “Ground Meat,” a cow that big also has a lot of meat that would otherwise go to the rendering plant. Fat, chunks of meaty bone that don’t work well for soup bones, leftover scraps too fatty for hamburger and the dried meat from the aging process – all of these can be used for chicken balls except the bones, which go to the dogs. For that matter, if you don’t have a dog, you could toss the bones into the chicken pen and they would eventually pick them clean, but I have dogs and they would be terribly insulted if the bones went to the chickens.

I sort through each box of scraps, first removing the large and obvious pieces of bone. The remainder is divided into pieces that are mostly fat or tallow, which I either render (melt) immediately, or package in crockpot-sized batches to freeze. Although I could render a lot of tallow in my big stockpot, it’s a long hot process and not something I want to do in the summer. The bags of tallow can be defrosted at a later date, cleaned of any remaining meat scraps – meat scraps make the tallow taste burnt or meaty – and popped into the crockpot for a day or two to render. Much easier, and I like easy, since I usually have three times too much to do.

What’s left after bones and fat have been sorted out are meaty scraps with some fat. I cut them into smaller pieces as necessary and put them through my Kitchen Aid meat grinder. When I have a bowl full, I pack them into balls a little larger than a child’s fist and array them, sides touching, on a jellyroll pan. Then they are frozen for a day or so. After the chicken balls have frozen, I remove them from the jelly roll pans, pack them into freezer bags and store in the freezer. A few times a week, I take out a chicken ball, let it defrost, and toss it to the hens. Especially in winter, when they have fewer insects to eat, the chicken ball provides them with fat and protein to supplement their carbohydrates (grains, produce and scraps).

Yes, it’s a fair amount of work. Between the scrap processing and grinding it will probably take me about three days to fully process this cow, and the tallow-making will go on in small chunks of time for most of the winter. But it also saves me lots of hard-earned dollars, supplies my chickens with a darned good source of protein from a healthy, pesticide- and antibiotic-free grass-fed cow, and keeps about 250 pounds of scraps out of the waste stream. I call that a good return on my time investment.