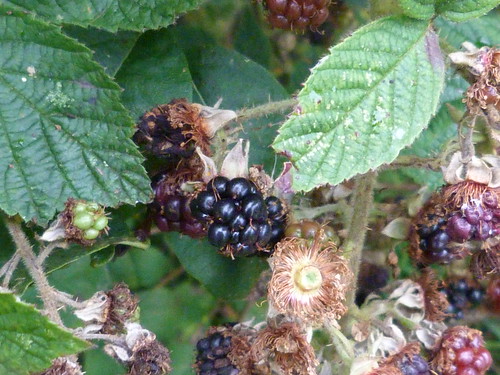 We spent this morning picking blackberries. Blackberries in California are the last gasp of summer; they ripen late (end of August on our property), soon after the swallows have left but before the towhees and juncos move down from the mountains for the winter. Depending on your point of view, blackberries can trigger thoughts of cobbler, jam and blackberry ice cream, or elicit curses. I’ve experienced both, depending on the situation.

Blackberries have a long fruiting period and we often are still picking by early October in warm years. Picking is done in one of two ways. In the first, I take the grandchildren and we spend an hour or so collecting the most readily available berries, (in between squabbles over the buckets, picking positions, the heat of the sun and the inevitable need for a bathroom break). If we’re lucky, we might come back with a few cups. The major picking is done by the adults, according to a system we have perfected over the years. My husband dons his saw chaps—over heavy duty jeans—pulls on a long sleeved workshirt and his knee-high laced work boots. Then, being right handed, he puts a heavy leather glove on his left hand and a nitrile glove on his right, and finally, sticks a pair of pruning shears in his pocket. I accouter myself in similar fashion (minus the saw chaps). Please note the repeated emphasis on “heavy” and “leather.” Blackberry thorns are long, sneaky, unprincipled and vicious. My husband, who spent some time hunting in New Zealand in his younger days, tells me they have the only plant he knows of which is worse—hairy leaves with serrated edges, thorns on the stems and a sharp hook on the leaf tip—they call it “lawyer vine.”

We square off with the patch and my husband takes the lead. With the saw chaps and his height advantage he can just wade into a thicket, incurring minimal injury except for the occasional thorn which penetrates his shirt. Like grass, blackberries grow more thickly on the other side of the “fence” and the ripest, largest, most luscious berries are always just out of reach behind the heavy growth of this year’s canes. He uses the pruning shears to remove the top layer of new growth (blackberries grow outward from the center but bear on second year wood) which impedes our access to the ripe berries. He holds the stems with the leather gloved hand, picks with the other hand (the nitrile gloves give him a little protection but allow for dexterity—I sometimes use old dishwashing gloves with the fingertips cut off; same principle) and drops the berries into the coffee can I hold readily available. Periodically he also applies the pruning shears to a thistle, another invasive species prone to seeding itself wherever it can. The thistles are easy to see at this time of year as they are about halfway through their bloom, so we get to enjoy the pretty purple flowers but prevent the seven-gazillion seeds they would otherwise shower over the landscape. I’ve often wondered if there’s some sort of symbiosis going on here, as the two plants seem to be amicable bedfellows, at least on our property.

Since I am left (literally) holding the can while he picks and prunes, I can turn my attention to other things. The baby bullfrogs sit in the shallow water and watch us work, leaping from a lily pad when we get too close, with a small splash and a diminutive version of the adult frog’s groan. The great blue herons circle and land at a safe distance from us scary humans, causing panic among the frogs, who know they are being targeted for lunch. A pair of kingfishers argues over territorial boundaries, skimming the surface of the water like low-flying jets. On the north side of the blackberry patch, several small flocks of quail harvest their share, chuckling “Chicago” between bites. The palomino mare munches grain in the next field while the milk cow loiters near the fence edge in hopes that there will be some to share (not likely).

Dragonflies dart among the willow leaves. The one I am watching, while listening to the maledictions as my husband disentangles a particularly tenacious vine, is a brilliant orange. My researches have identified this as a Flame Skimmer, and it does indeed look like a flame, busily playing thread the needle through the gray-green willow tendrils. Butterflies—mostly the Western Tiger Swallowtail in palest pastel yellow with black piping—skim the pond and settle on the wildflowers. A new wildflower tempts me—it looks like a miniature aster, not even an inch across, with a deep yellow center and petals of a blue so faint it looks white from a distance—but it’s out of reach, I don’t have my field guide with me, and I know that if I wander off with the blackberry container I will be in trouble, so I stay put and turn my attention to the berries.

It is the colors which attract me now. Some are a deep purple, others blue-black with ripeness; unripe berries can be palest green to plum to magenta to glowing ruby. Depending on whether the sun shines directly on them or shines through them, they sparkle with reflected light or take on the jewel tones of a stained glass window. They have a multiplicity of tastes to go with the colors. I try tasting them individually to see if I can predict taste in relation to color. Ripeness should be indicated by color, or so I expect. This one, dark black and slightly soft, has a sweet, winy flavor. The next one of the same color has an undertone of lemon, and the third is neither sweet nor tart, but simply insipid. I try a berry closer to crimson and find it perfect; the next one of the same shade is almost too bitter to eat. I continue to sample, meditating on the genetic diversity which can create such variation in a single plant. The experiment ends when my husband catches me eating the fruits of his labors.

The sun grows hot as it nears midday; only a faint breeze from the pond makes this activity comfortable. The breeze smells faintly of wild mint, wet grasses and the sweet blackberries. I take a deep breath, stocking my memory banks with the concentrated essence of summer. I know I will smell it again on a snowy day, when I take the first bite of blackberry cobbler still warm from the oven.