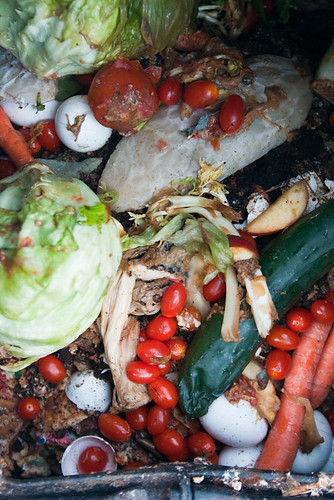 I read a couple of figures the other day that dismayed me, to say the least. The first: 40-50% of the food produced in America is wasted. The second: 14-20% of the waste is food we throw out after we get it home. When you add the cost of this wasted food to the government subsidies that help produce the surpluses we experience, it’s darn well mind-boggling. The subsidies? Oh, yes, didn’t you know? Our government pays farmers to grow wheat, corn, soybeans, sunflowers, peanuts, meat, milk, rice and believe it or not – the sorghum and barley for beer. About $150 billion in tax dollars went to subsidize these crops in the last 15 years. That means we threw $75 billion away.

Are you depressed yet? You should be. Admittedly, some of the waste is because of weather or crop losses, but much more of it is due to “cosmetically imperfect” food being tossed because supposedly the American consumer won’t buy it. Or leftovers that are dumped in the garbage instead of being reused, fed to animals or composted. Or food that is allowed to sit uneaten in the refrigerator until it spoils. Grocery stores often discard the rest of a case when one glass jar in the case breaks.

There is no shortage of food in this country. Once upon a time it was considered just about sinful to waste food. Leftovers were put back out on the table until they were finished. Only enough food for one or two days could be cooked because refrigeration wasn’t available. If food became too old to eat, it went to the chickens or the pigs. When you live close to starvation, as was common only a few generations ago, it took only one bad harvest, one drought or one fire for your family and maybe your whole community to go hungry. Food was seen as the precious resource it is. Harvest festivals celebrated the satisfaction of a barn, cellars and pantries stuffed full of good things to eat.

Our current agribusiness system has brought us food so cheaply that we see no problem in wasting it. Admittedly, some of the stuff is only fit for the garbage can – I put Twinkies and Ding-Dongs in that category – but even the worst of it could at least go into the compost heap or feed animals. However, in the minds of officious bureaucrats (thanks, Ell, for the new information!), it makes good sense to waste food if you don’t have the required permit. We have surpluses of food like corn, milk and soybeans, yet we pay farmers to grow more and pay health department officials to demand that good food be wasted. Surely there are better ways to spend our tax dollars than to grow so much food that half of it is wasted?