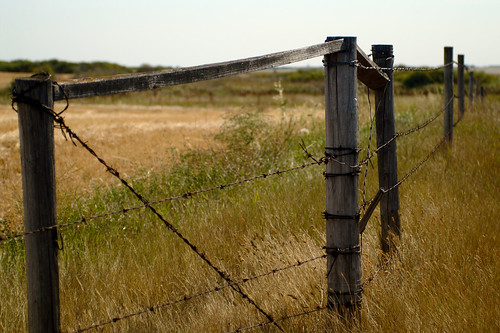 When you live in the country, you have to deal with other people’s animals. It may be the dogs that get loose and come to visit every so often. It could be the goats that think your roses look like dessert. It could be a stray cow, a loose horse or a roving band of sheep. And then there are the poor critters that are dumped by their “loving” owners, because they’re too expensive to feed, or old enough to breed and now coming in heat, or the cat had too many kittens. I acquired all of my cats and one of my dogs because some irresponsible person couldn’t be bothered to live up to his or her commitment to either take good care of an animal or put it down quickly and painlessly.

I may have mentioned in these posts that my husband hates goats, unless they’re being used for target practice. So he was not exactly enthused when the new next door neighbors came with a goat herd. Unfortunately, these folks knew less than nothing about building goat-proof fences, and periodically the goats would come to visit. Our dogs would go bananas and the horses would spook into the far corners of the pastures, snorting and blowing as though menaced by a mountain lion at least. What I found hilarious (my husband considerably less so) was that if he was outside, the goats would make a beeline for him and stand in a circle watching him work, or follow him around as if he was the Pied Piper with a pocket full of valerian. They ignored anyone else, including me. I just loved watching him traipse back up the road to the neighbors’ with the goats at heel, swearing mightily at the top of his voice.

The other issue we’ve had to deal with more than once are neighbor’s dogs that get in the livestock. We were awakened once in the middle of the night by barking dogs and panicky horses. Two dogs had the yearlings cornered in the paddock and did not back down when my husband yelled at them. One dog actually came on toward him despite the rifle in his hands. Result: two dead dogs and a yearling that was spooked for a week because he had to aim the rifle right over the horse’s back. In a second case it was three dogs attacking another neighbor’s cow and horse. The dogs were being egged on by several children from the family that owned the dogs. My husband had the unpleasant task of shooting the dogs before they killed the steer that was already bleeding from several bites. Naturally the children raised Cain, and so did their parents. When they called the sheriff, the deputy came out, looked at the steer and talked to my husband. Then he went back to the family with the dogs and told them in the future they had to keep their animals chained or under the control of an adult. He gave the kids a talking to as well. Fortunately, the family moved soon after that, as relations were irreparably strained.

1 Response to Your Neighbor’s Animals