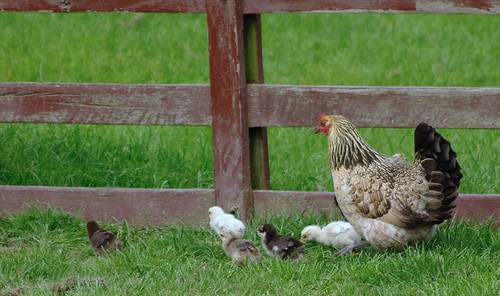 I’m not any more fond of conventional animal food like horse chow, laying mix and such than I am of Twinkies, soft drinks or Hamburger Helper. Also, I’m cheap – ahem, I mean thrifty – so I’m always looking for ways to expand the animal food supply. Here are some of our less conventional food resources.

We live in rattlesnake country. That means that on occasion, we have to kill one. We try to avoid it when possible, as the snakes help to keep down those pestiferous ground squirrels. Generally, we operate on the principle that if a rattlesnake tries to get away, we let it go. Rattlesnakes that go on the prod immediately or those that strike without rattling—happens occasionally, usually in late spring when they’ve just come out of the den; they’re hungry and very grumpy—get dead. The head is cut off and carefully buried, the rattles go to the granddaughters and sometimes we skin the snake as well. The meat goes to the pigs. Pigs in the wild hunt and eat snakes all the time, so why waste the meat?

We also live in oak tree country. Pigs love acorns. They will eat them off the ground, or reach up and strip them from low-hanging branches. If there are worms in the acorns, they don’t care—they eat worms, too, whenever they can. If we have to cut off a branch that has acorns on it, we toss it into the pen. Some cows will eat them in small amounts as well. Chickens will peck at them and eat the meats once they get a hole in the shell. Gathering acorns is a great activity for the smaller fry, who are willing to accept quite low wages for their labors.

Chickens need protein. In the wild or on free range, they get it mostly from the bugs and worms they eat. If yours are penned up, you need to supply some sort of meat for them. Meat scraps or poultry carcasses work fine. If you happen to shoot a coon that wants to make a meal of your birds, you can turn the tables by feeding the eviscerated and skinned predator to the flock. We also give them the ground squirrel carcasses. Back when it was common practice to run a trap line in winter, the skins of animals such as foxes, weasels and rabbits were tanned for furs and the meat fed to farm dogs, cats and chickens. Some people even pick up road kill and take it home to the chickens.

Egg shells, crushed and fed to the hens, will supply them with calcium. Some experts say not to use egg shells as it encourages egg eating, and others say you must cook and finely crush the egg shells to prevent the spread of disease. Still other experts will tell you that even if you feed egg shells, your hens also need oyster shells. Maybe in chicken factories with no access to real dirt, bugs and sunshine, these pronouncements are true.  As usual, I don’t rely on the experts! I just toss the uncooked, uncrushed egg shells over the fence with the food scraps. I have not found egg eating to be a problem. I think egg eating is more likely to happen if the nest area isn’t dark enough. If your chickens really do need extra calcium, you’ll know it because they will start to lay thin-shelled eggs. We get an occasional thin-shelled egg—maybe once or twice a year. Not often enough to make me buy oyster shells.

Weeds, especially the deep-rooted types that are good at bringing up minerals from the soil, are relished by almost all livestock. Horses think poison oak is better than candy, and will eat it down to the ground. Our sheep like blackberry leaves. Amaranth isn’t called pigweed by coincidence—the pigs love it. They and the chickens will also devour purslane, miner’s lettuce and similar herbal “weeds” with great relish. Maybe they know something we should be learning? Other wild plants such as blackberries, plums and elderberries can be used as chicken and pig fodder, although I prefer to eat a lot of the wild fruits myself.

My husband is a hunter, and things like deer legs, duck wings and goose heads are saved for the pigs.  When we butcher, the offal – intestines, lungs and such – go to the pigs, who slurp them right down. I’ve tried to get our dogs and cats to eat things like raw liver and offal, but they’ve always turned up their noses at it. One of our dogs, who I suspect was abandoned and had to scavenge her food, was willing to try liver this year, and perhaps because of competition, the other dog finally ate some too. We also give our dogs the raw meaty bones, but the meaty scraps are processed into what I call chicken balls. I cut off all the useable fat to render for lard and tallow, then use my meat grinder on everything that’s left. The ground material is easily shaped into fist-sized balls and laid in rows on a cookie sheet to freeze. After the balls freeze solid, I repackage them so they take up less space and store them in the freezer. Every day I defrost a few balls and toss them to the chickens, who go into a feeding frenzy over the things.

It’s possible to feed your animals without resorting to commercial feed; you just need to change your mindset and get creative!