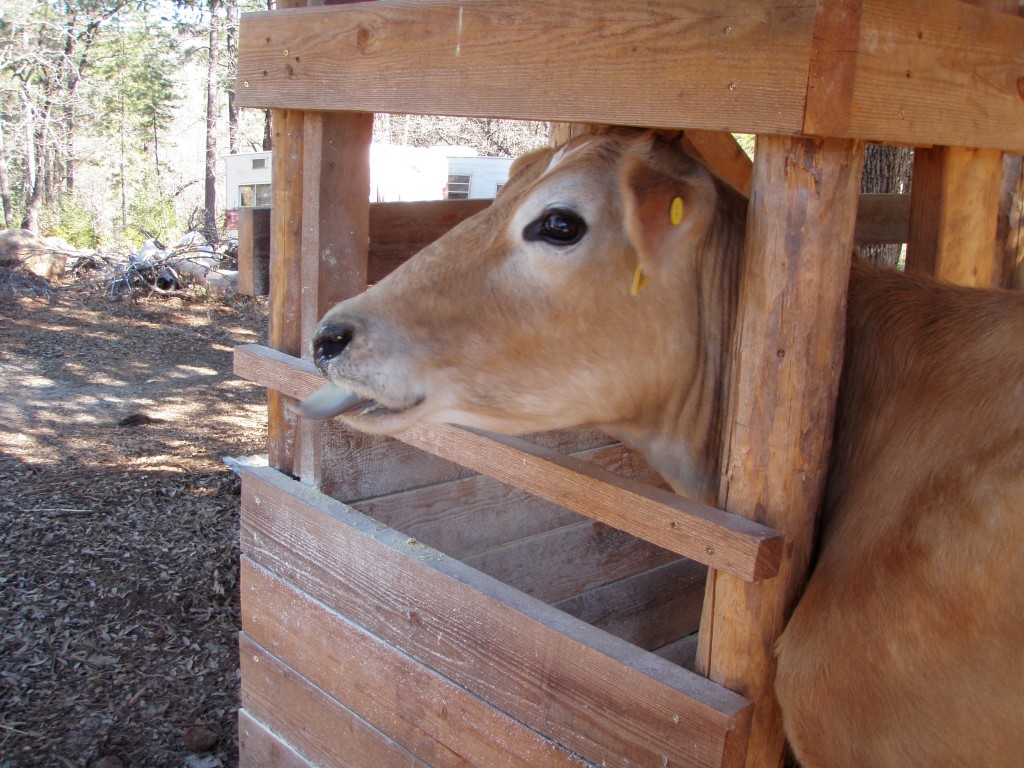 Bad news first, I guess. Maybelle the milk cow lost her calf at seven months. Although there were a number of possibilities, my husband and I were pretty sure she had been eating pine needles, which can cause abortion in the last three months of the pregnancy. The calf looked well-developed and healthy, except that it was either born dead or died very soon after its birth. Since the cow calved in the middle of the night – as animals are prone to do – we didn’t find out about it until the next morning. The first thing we noticed was that Maybelle had a swollen udder. Since we had been drying her off to get ready for calving at the end of May, that was unexpected. (Cows need a rest period of about eight weeks at the end of a pregnancy to ensure adequate milk for the new calf, so you usually stop milking, or dry them off). Then we found the calf’s body, and made the connection.

We milked her to relieve the pressure on her udder, which was tremendously swollen. Some of the swelling was excess fluid in the tissue rather than milk, but we didn’t know that and it led us into a mistake – we took off too much milk. Normally, a newborn calf nurses a little bit at a time, but frequently. We took off a couple of gallons in one fell swoop, not once but three times in 48 hours.

By the next morning, the cow looked sick. She was lethargic and not interested in food, which is a bad sign, especially in a cow that is usually a voracious eater. So we called the vet. By the time he got there, in the late afternoon, she was even sicker, and starting to stagger a bit. At this point there was a little divergence in viewpoints. The vet – who is excellent, and I am not criticizing – thought we might be dealing with leptospirosis, a contagious disease of ruminants that can cause abortions. We were convinced it was a pine needle abortion, as we had found branches that had been heavily chewed.

The staggering, however, was not related to either problem; Maybelle had milk fever, probably caused because we had milked her too heavily. Milk fever is not really a fever but a very low level of calcium in the blood. Normally, you keep a cow on a relatively low calcium diet when you dry her up, because otherwise her system gets used to a high calcium intake. Then when she calves, and there is suddenly a high demand for calcium, her body can’t mobilize its reserves quickly enough and the calcium in her blood drops abruptly. Low calcium causes muscle and nerve dysfunction, hence the staggering, and can be fatal if not treated promptly. We had been feeding alfalfa just prior to the dry-up period because she had been looking a little thin. Normally, it would not have been a problem, because she was back on low-calcium grain hay and would have stayed on that until she calved, but she aborted within a week after we stopped the alfalfa. Anyway,  the vet gave her some calcium, and she improved almost immediately.

That made us (hubby and me) even more sure we were not dealing with leptospirosis. However, twenty-four hours later, we discovered that Maybelle had not “cleaned,” or passed the placenta. Reinforcement for the idea of pine needle abortion, which often causes retained placenta. Luckily, we had started her on antibiotics the first evening when it was obvious she didn’t feel well – we hadn’t found the placenta and she looked clean, but since she was sick, we were covering the bases. When a cow has a retained placenta, it’s better to wait until it passes normally; manually removing it can cause massive bleeding and scarring. On the other hand, a cow’s anatomy being what it is, the hanging placenta gets contaminated with manure and can cause an infection that either renders her sterile or makes her septic. So we continued the antibiotics, and the vet gave us some boluses to insert into the cow’s vagina. This is a fairly major production involving immobilizing the cow in a chute or milking stanchion, a plastic glove that goes up to the elbow, soap and water scrubbing of the affected parts and a water-soluble lubricant such as KY Jelly. Most people don’t keep large quantities of KY Jelly on hand – it takes a good cup for each treatment – so we had to ask our son-in-law’s father to bring some up from town. Not being a cowman, he was understandably puzzled as to why we needed so much KY Jelly… Maybelle suffered us to place the boluses (meaning she was too sick to kick my husband over the fence). In addition, we tried to keep her nether quarters as clean as possible with warm soapy water laced with iodine to decrease the risk of infection. Since she was sick, she also had diarrhea, which is a common occurrence in a sick cow. Let me just say it was a messy business and leave it at that.

In the midst of all these fun and games, my husband came down with some version of intestinal flu. Like the trouper he is, he was still out there helping doctor the cow and take care of the animals despite his frequently expressed desire to just lie down in a corner somewhere and die. To add the final bit to the mess, one of my friends had a health crisis and I spent all of last Thursday in the emergency room and then helping her get settled once she was discharged.

The good news is the cow is much better and we were able to keep her in milk. She passed the placenta and made it abundantly clear yesterday morning that she was NOT going to be having any more of those thrice-damned antibiotics. Hubby’s tummy seems to have settled down and my friend is better, although not yet completely well. Finally, the vet agrees with us that the cow did not have leptospirosis, which is a very good thing.

So my apologies for the silence on the blog, and now you know “the rest of the story,” as Paul Harvey was wont to say.