When you have a ranch and animals and crops, you have chores. If you try to produce much of your own food, you have even more chores. And in my experience, chores, rather like rabbits, breed lots more little ‘uns.

Take milking a cow as an example. The milker must be washed prior to milking and rinsed well after you finish. I use glass jars to store my milk, so they too must be washed. Prior to milking, you must catch the cow, unless you have a greedy and tractable cow like our Maybelle, who practically knocks you down in her eagerness to get in for the goodies. I do sometimes have to call her from the far end of the pasture, but I can’t remember the last time I actually had to go out and get her. When Maybelle comes in, so do the other cows. I put her in the stanchion and get her started on her grain while I take grain and kelp to the others. If it’s winter, I also have to take hay out and spread it. After I milk, the milk must be dipped or poured out of the milker into my gallon glass jars, the jars rinsed, dried and labeled. Then there are the spinoff chores: making butter, cottage cheese, cream cheese and so on. 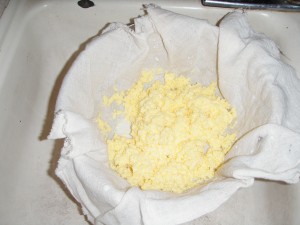 Other chores related to milking include hauling feed. Every couple of weeks we get a big sack of screenings (what’s left after grain is ground), and we also haul hay for winter feed. Hauling hay means we hook up the big gooseneck trailer, drive to wherever we’re buying the hay, load the trailer – by hand – haul it home, unload the trailer – by hand – and stack the hay – by hand.  The hay has to be covered with a tarp, since we haven’t gotten the new barn built yet.

In the summer, we don’t feed hay but run the animals on pasture. Our pasture is flood irrigated, so at least once a day, someone has to dig out the ditch openings to allow the water onto a new area and block the old openings so they will be ready for the next round. Once a year, my husband fires up the backhoe and cleans out the main ditches, which would otherwise be overgrown with sedge, grass, cattails and such. We also have to perform occasional repairs to the pipe that carries water from the spring.

In order to keep the cow in milk, she must have a calf periodically; once a year is the usual interval. We don’t keep a bull, so at the end of the summer, we haul up a Rent-a-Bull from a man who lives about 25 miles away and has a variety of bulls to choose from. That’s another animal to feed and keep an eye on, as well as two trips with the trailer – one to bring him up and one to take him home.

This is just the milk cow, mind you. There are also chores associated with the chickens, the pigs, the sheep, the garden, the orchard…