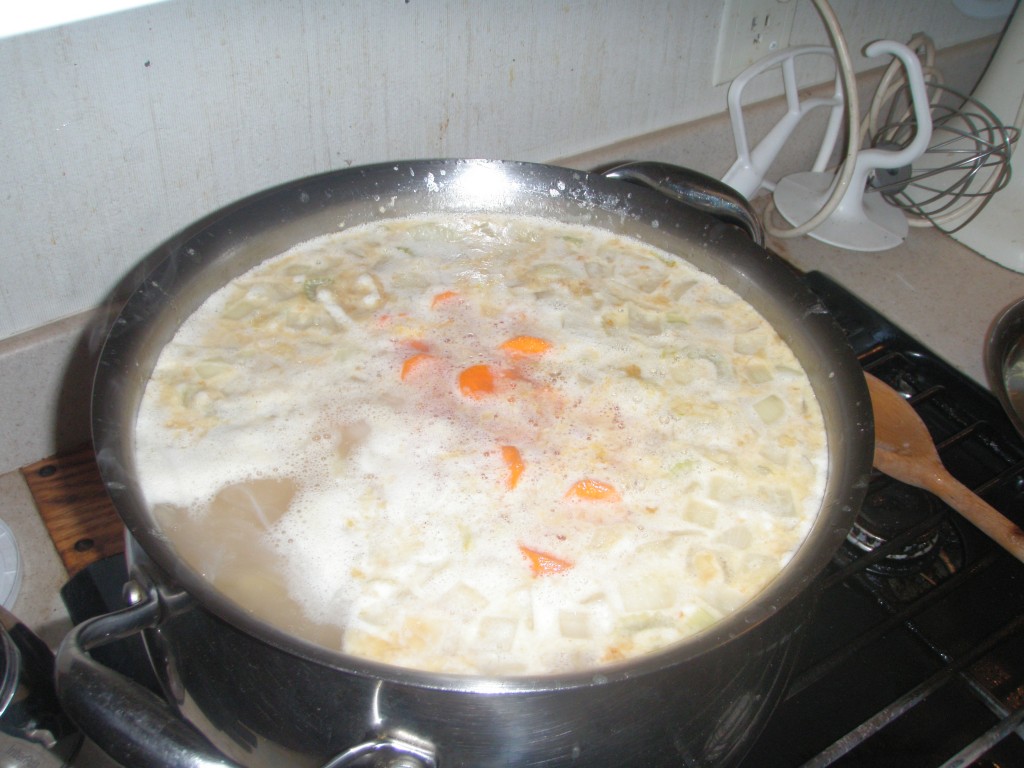 I figure if you’re going to make soup, make a BIG pot!

Hearty soups are a great way to kill several birds with one recipe (apologies to our feathered friends out there). They are usually relatively inexpensive; many have only small amounts of meat and rely on beans to boost the protein content. They pair well with other simple and easy foods such as home-made yeast bread, muffins, tortillas or quick breads, sliced cheese and a salad. Many can be fancied up for company. They often make use of leftovers and are usually simmer-on-the-back-of-the-stove-so-you-can-go-do-something-else recipes. Many freeze well and can usually be doubled or tripled for crowds or storage. Finally, they lend themselves to variations when you are short or out of a particular ingredient. So maybe they’re not the perfect recipe, but in my experience, they come pretty close. Navy Bean Soup is a good example of all of these qualities.

Optional ingredients: a bay leaf, a clove or two of garlic (I usually use it), chopped fresh parsley, salt and pepper

Pick over the beans for rocks, stones and such. Soak the beans overnight in water to cover. The next morning, put the ham hocks in a big pot with water to cover. Bring to a boil, skim off any foam and turn down heat to a simmer. When the meat has clearly fallen off the bones, let the meaty broth cool and then remove meat and bones. strip any remaining meat from the bones, chop and set aside. If you have animals, give them the bones, otherwise bury them in the compost heap.  Drain and rinse the beans, then put them in the ham broth. Add bay leaf if using. Bring to boil, turn heat down and simmer until beans are tender usually 4-6 hours depending on the variety of bean. Add water if necessary. Dump in the chopped vegetables (plus garlic). Continue to simmer until veggies are tender, then stir in meat and let it heat through. Add parsley and serve.

This soup is much better with ham hocks than steak and ditto dried beans than canned. But when time is of the essence, the second choices will make an acceptable soup. A bowl of this soup plus buttered cornbread or muffins and a big glass of raw milk is one of my husband’s favorite winter meals. It also goes well with a grilled cheese sandwich or quesadilla.