Although I spend most of my time on the ranch, every once in a while I have a night out. The most recent one came with my attendance at the grandkids’ school Christmas program. I missed last year’s program because it occurred on a night when I was teaching, so I was happy to make up for it this year. The school tends to focus on traditional songs that don’t mention religion or baby Jesus to avoid offending anyone — politically correct but disappointing, in my opinion, because I love the traditional carols. However, somehow “Silent Night” managed to slip in this year.

We hit low-lying clouds and fog on the drive down the hill that slowed us to a literal crawl, with the seven-year-old fussing because she was supposed to be in her classroom at exactly 6:15. Then the rain started, and by the time we got to the school, it was coming down in buckets, so the carefully arranged curls in their hair didn’t make it through the program — they still looked adorable, IMHO.

As anyone who has ever been to one knows, you don’t go to a school Christmas program for the quality of the music; you go to watch the kids. And boy, did we get an eyeful this year! To begin with, the rehearsals had not included the gazillion-candlepower spotlight, so in addition to the usual deer-in-the-headlight look so many youngsters sport at these events, we were treated to children who were pretty much blinded by the spotlight shining directly in their eyes. One youngster held up his hand to shade his face and got so fascinated by the way the light shone through his hand — it was almost as good as an X-ray — that he started twisting his fingers around to get a better view. Then he started looking around the auditorium and eventually just circled in place for the duration of the performance. As far as I could tell, he never sang a note.

Another class was performing a sprightly little number when one boy on the end decided to enliven the program with some can-can kicking. The kid next to him was one of those life-is-earnest-life-is-real types who was FOCUSED on singing. After a couple of minutes enduring the Rockette next to him, “Earnest” used his elbow to such good effect that he nearly put the dancer clear off the stage. One eighth-grader in the back of the row spent the performance using the spotlight to make shadow puppets on the auditorium wall behind the stage (nope, he didn’t sing, either). Two of the girls seemed ready to square off with the red drumsticks the class was using to keep time to a percussion number. A quick hiss from a teacher put a stop to that little dispute. 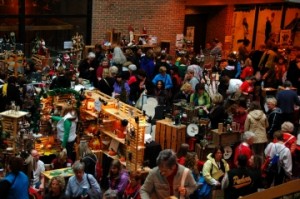 Light glittered from dozens of sets of braces on well-brushed teeth. The boys sported everything from tee shirts and jeans to one lad in a three-piece suit and another in a pristine white shirt with sleeves so long you could only see his hands if he held his arms straight over his head (he was the one with the excellent elbow action, by the way). Girls tended to sequins and ribbons, some in rather retro outfits; one, so help me, looked like Audrey Hepburn in “Breakfast at Tiffany’s.” Footwear varied from boots to tennis shoes to stiletto heel four inches tall — darned if I know how that child could walk.

Then Santa showed up to make the night for the smallest fry, who conked out the minute we got in the car and slept all the way home. And a good time was had by all…