Insects are one way you can tell the seasons are about to change.

In the spring it’s the mosquitoes. Mosquitos must have some sort of earth magic—and it’s undoubtedly black magic. One day of warm temperatures and they suddenly appear in swarms, voraciously seeking blood. Trouble is, they’re too small to pound a stake through their hearts like the bigger sort of vampires, and often too fast to swat. I think their progenitor must have made a bargain with the Devil. They seem to like the taste of some people more than others, attacking my husband in swarms while I may have only one buzzing in my ear. 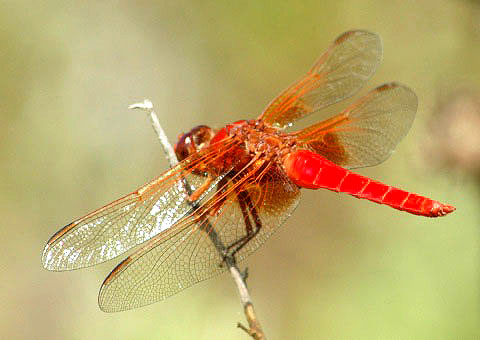 As the weather warms, dragonflies begin to appear, darting jeweled needles in royal blue or flaming orange. Some wear checkerboard wings; others seem drab until you take a close look at their eyes, which are like prism paper, combining all colors on a background of silver. With the dragonflies come tiny stinging gnats, so small you can barely see them, but they pack a punch. Honey bees spend cold days in their hives, but on warm winter and spring days, they throng around the bag of corn screenings. Luckily they aren’t aggressive, perhaps because they are so gorged on grain that they are lethargic. As long as I move slowly and don’t accidently squash one, we coexist peacefully. I suspect they’re attracted to the sugar in the corn, especially at a time of the year when there are few flowers available. During the summer, they pay no attention to the screenings.

In the heat of the summer, the flies are a pestilence, and huge black horseflies bite the larger animals viciously, leaving bloody welts. Horseflies are very difficult to kill by swatting them, and you must hit hard enough that it often spooks the animal, which jumps away from you. The swat stuns the fly, and you must look for it on the ground and quickly step on it, or it will recover and fly away. We pick up the corpse and let the animal smell it, especially the horses, so they understand we weren’t clobbering them, just the fly.

As the nights cool, flies gather on warm surfaces, such as the door. When you open the door, the fly comes in the house – a pesky nuisance buzzing about until you manage to clobber it with a fly swatter. They also swarm the animals, rising in black clouds when you wave a hand or a long tail switches them aside. This is the wasps’ favorite hunting time, and they, too, hover around the animals, seeking a fly which they carry off to stun and then lay eggs in its flesh, so their larvae will have something to eat as they grow. I must confess that I can’t get too upset at the thought of the flies’ demise, as they are so annoying when you’re trying to work. My daughter particularly hates the tiny flies that are attracted to sweaty faces. Get both hands full, and a fly will invariably buzz your nose or mouth.

Birds, bats, lizards and other insects revel in the wide variety and numbers of insect life, gorging indiscriminately on whatever flies or crawls. I wouldn’t be surprised to find out that the food value of insects outweighs most other sources, especially for protein, but I prefer beef steak and pork chops, thank you.