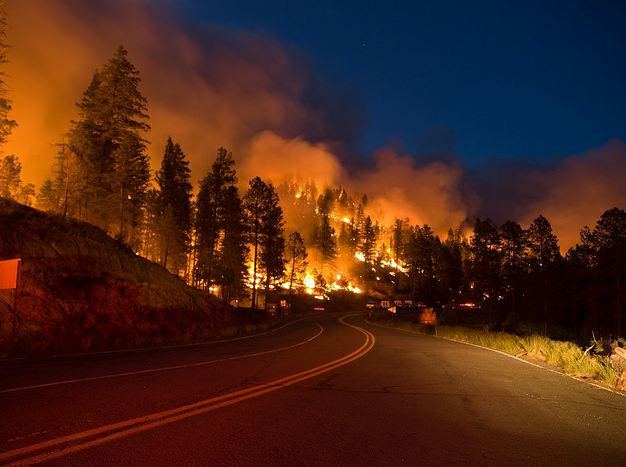 Wildfires in the United States burn somewhere between 3 million and 10 million acres a year. When you live out in the country, the odds are that eventually, you’ll have a fire close enough to be worrisome. It could be the result of a lightning storm, such as the one that went through our area in June some years back. Those fires burned for months; only the advent of the rainy season eventually put them out.

Firefighting in California is technically the responsibility of the California Division of Forestry, but if things are bad enough, it can be a situation of all hands on deck. Volunteer firefighters, prison inmates and loggers may be called in, as happened with the Fountain Fire in 1992. The fire burned 64,000 acres, plus 600 structures in the small towns of Round Mountain and Montgomery Creek, including the local clinic. The smoke plume from the fire looked like an atomic blast from Redding, a little over 25 miles away. CDF called in catskinners and other heavy equipment operators from all over the north state (my husband among them), but it still took weeks before they got a handle on that fire.

When you’ve live through a few experiences like the Fountain Fire (or you’re married to a former hotshot firefighter) you think about fire prevention. Escape routes, for example — if the fire is between you and the road out, where else would you go? Defensive space is another issue. The few homes that survived the Fountain Fire, or the more recent Ponderosa Fire over in Manton, another small foothill town, had defensive space. The understory beneath the trees had been cleared of brush and other flammable material. A green space — well-watered lawns, pastures and gardens — also increased the odds that the owners would come back to find their places still standing despite the charred areas around them. Some homeowners refused to evacuate, saturating their homes and outbuildings with hoses and putting out spot fires. 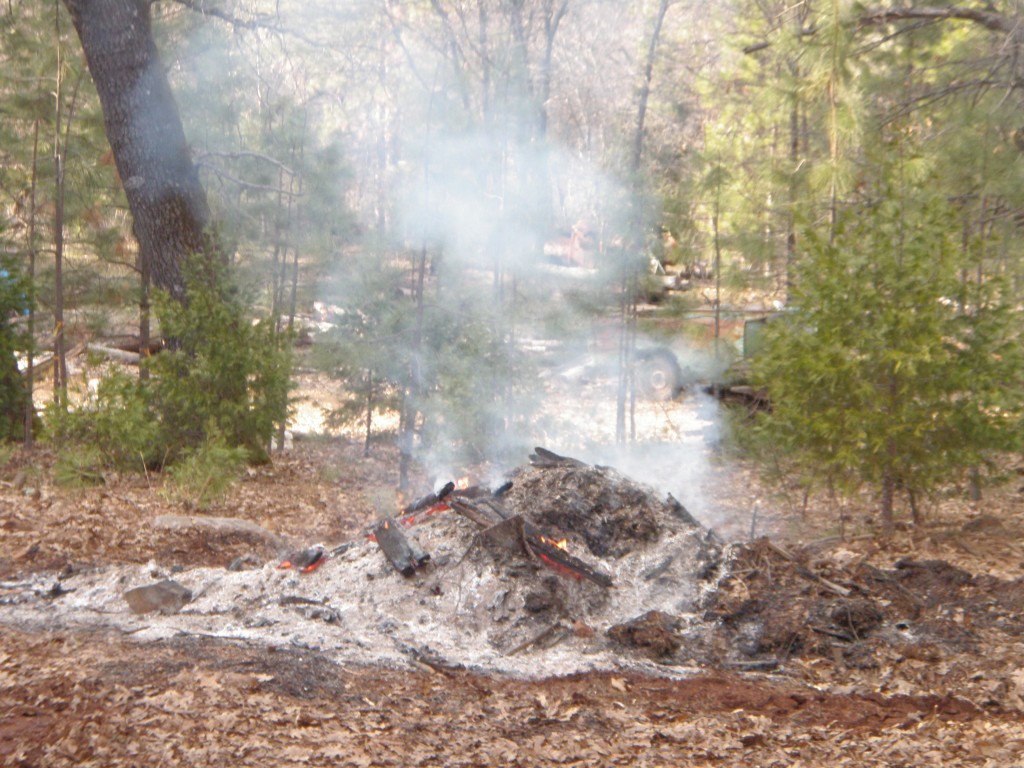 To make a long story short, my husband, who likes playing with heavy equipment almost as much as he likes playing with fire, spent today improving the defensive space around our homes. He and the oldest granddaughter had gathered, rooted up and piled any dead branches, downed trees or old stumps into a nice pile that he touched off first thing this morning. Then he made the rounds with his portable propane torch, setting off the dry leaves. Of course, that meant we had to live with the smoke, which the wind naturally blew straight toward the houses most of the day. 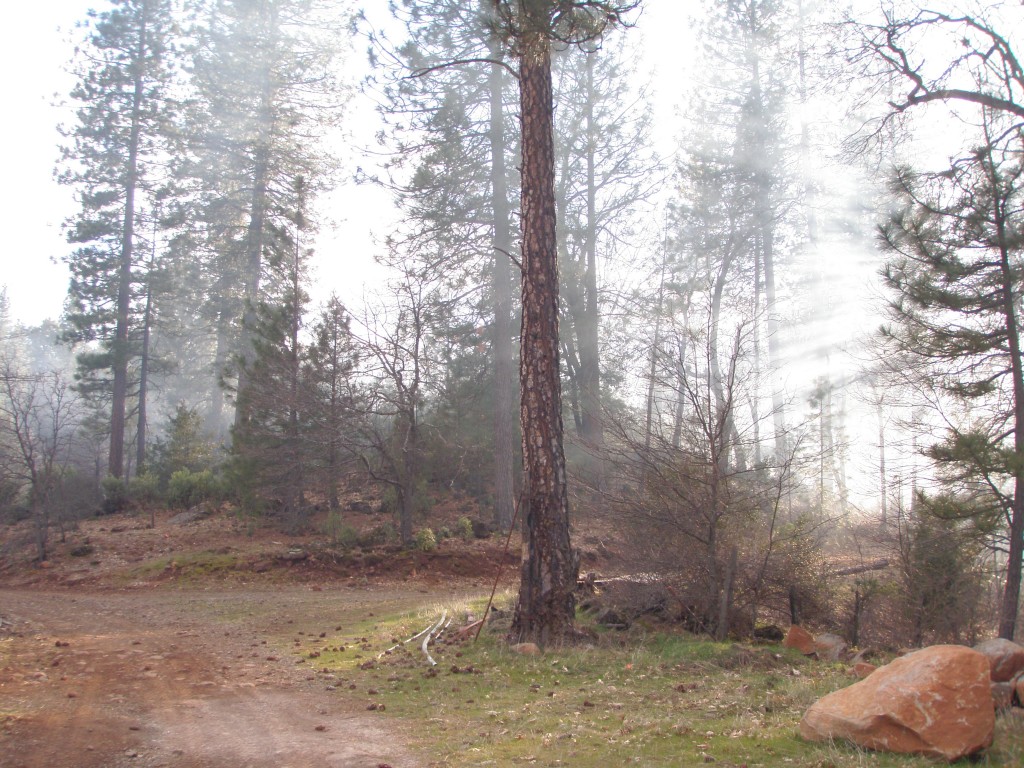 Better a little smoke today than a firestorm tomorrow.

There’s a fair-sized storm headed in day after tomorrow that should settle the smoke and soot. It will also stimulate the growth of grasses and other plants — my Cherokee ancestors and many other Native Americans used fire as a vegetation management tool for centuries. 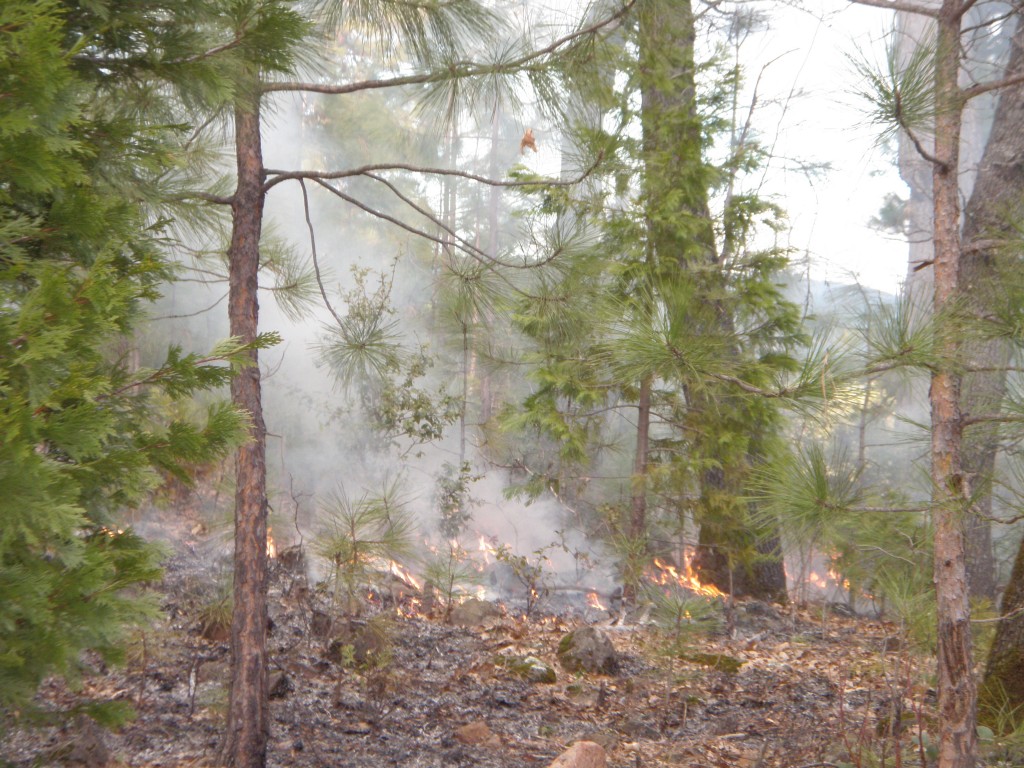 If you do it right, you can burn off the little stuff on the ground without hurting the trees.

Many of the more severe fires in the West in recent years have occurred as a result of shutting loggers out of the forests; the Forest Service has also tended to put out fires quickly, which leads to the build-up of fuel. When a fire finally does come through, it’s violently destructive.

We’d rather deal with a little smoke for a day or two than have the place burn down around our ears.