Drying Up the Cow 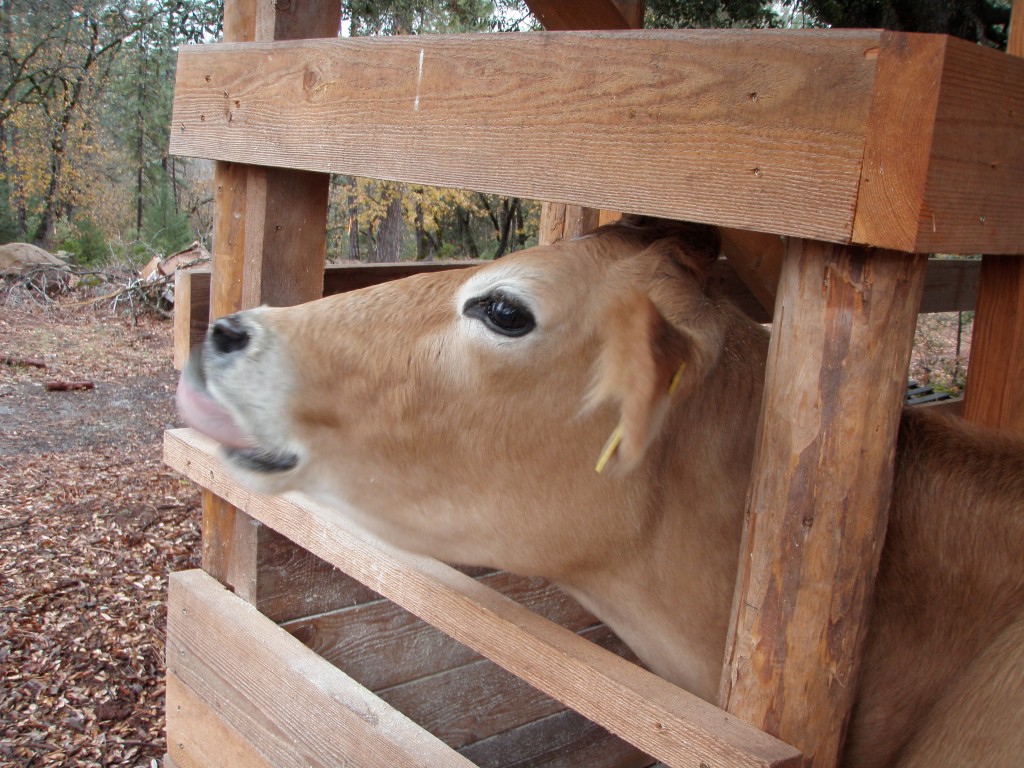 Maybelle awaiting her last milking for a while.

It’s that time of the year again — yes, spring, but that wasn’t exactly what I had in mind. This is also the time of year when the milk cow should be dried up to give her a break before she has to raise another calf. You dry up a cow by not milking — most people just stop milking when daily production is two gallons or less, and the cow’s body quits producing as demand goes away. Milk production puts a big demand on a cow and dairy cows produce much longer than they would if they were in the wild. Most cows wean their calves by the age of six months and the calf’s demands on the milk spigot have been gradually dropping as it eats more grass and hay. Since long-term milk production is a human invention and not the natural order of things, we have to take extra steps to make sure we don’t wear the animals out. To give you an idea of what I’m talking about, the average longevity of a dairy cow in the United States is four lactations. Since many dairy cows are bred at 12 to 13 months to calve nine months later, that means by the time a commercial dairy cow is six (at the latest), she’s on her way to slaughter. In practice, most dairies slaughter cows at age four because by then total milk production has dropped enough that it’s not economical to feed them because feed costs are so high. Cows could live 20 years, producing a calf almost every year, if we didn’t try to push them for maximum production in such an artificial fashion. What’s interesting and sad about this practice is that the high production is mostly water. When cows are milked once a day — most commercial dairies milk twice a day – total production drops about 30 percent, but butterfat content and milk solids don’t change. 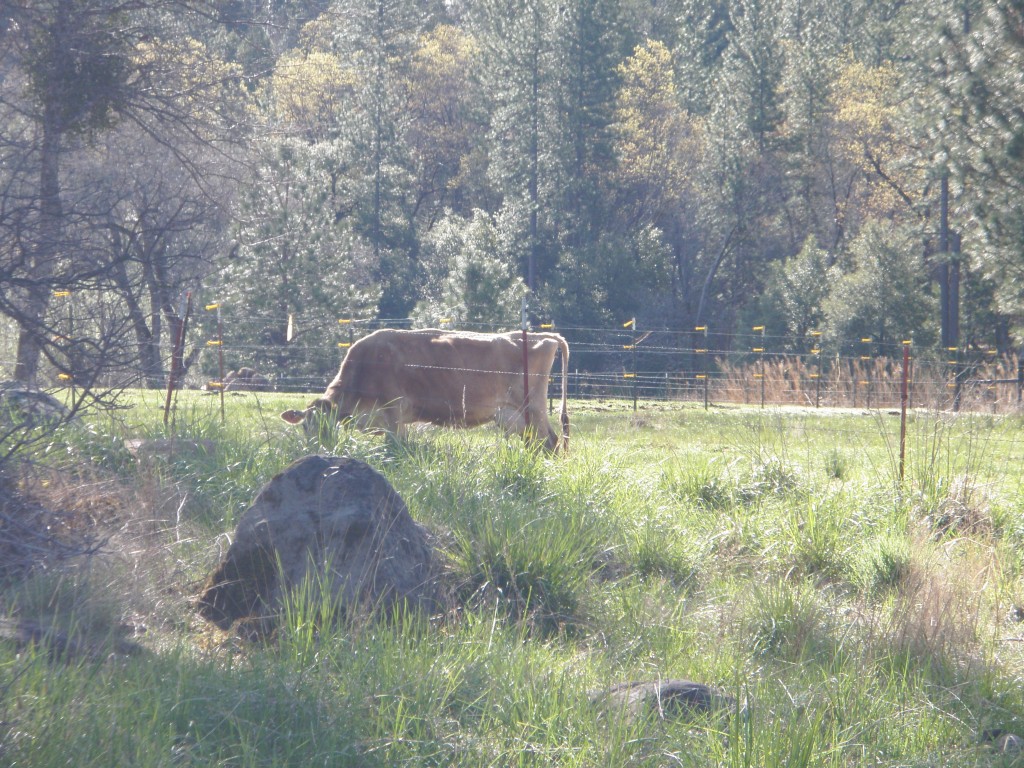 Green grass, shade and a chance to rest — what more could a milk cow ask?

Anyway, back to drying up the cow. We have been gradually cutting back on Maybelle’s groceries to get her ready to dry up. The more groceries she gets, the more she puts into milk production. When she’s milking, she usually gets a couple of #10 cans of grain screenings twice a day. If I think she needs more carbs, I may add several cups of molasses to her grain — she loves that! We feed free choice grain hay — a mix of oats, wheat and barley — as well as some alfalfa hay for extra protein and vitamins, and supplement her with minerals, kelp and salt. That’s the fall/winter ration; in summer it’s usually just grass, plus supplements. We like our cows to be on pasture for at least a month before they calve, as they get a wide range of nutrients during a period when they’re providing maximum nutrition to that calf in their bodies. I started decreasing her grain in early March and Maybelle finished the last of her alfalfa about a week ago. Alfalfa is a high calcium feed, and you don’t want a cow on a high calcium diet just before she calves as it increases the risk of milk fever — a calcium imbalance in the cow’s blood stream. You also want her milk production to slow down so she won’t be too uncomfortable during the initial stages of the drying up process. Her production has been gradually dropping from about 2-2/12 gallons a day when she was on full grain rations plus alfalfa; this afternoon she was down to a gallon, so today was the last milking until after she calves. She’ll be a little uncomfortable for a few days as her bag will fill up and get tight, but since there’s no demand, her system will shut down production pretty quickly.

When the cow is dry you have four choices: forgo milk and milk products entirely, buy commercial products at the grocery, buy raw milk at the health food store (although some groceries have it) or stock up on what you can. Although milk and fresh buttermilk freeze well, they take up a lot of freezer space, and that can be a problem when you’re looking to freeze enough for two months. We go through about a gallon of milk a day around here, so there’s no way we can freeze enough to tide us over. Cream may separate, but if you want the cream to dollop in your coffee, you just have to stir or shake it before you use it. Frozen cream doesn’t whip well, however. If you want whipped cream, it’s better to whip it first, dollop it onto a baking sheet and freeze the dollops, then package in a plastic bag. Cream cheese and butter, well-wrapped, are good for several months — butter freezes and lasts extremely well. Sour cream is iffy — you can use it in soups and such, but it usually doesn’t make a very good dip once it’s been frozen. Cottage cheese doesn’t freeze well unless it’s in something like lasagna. By the way, my comments apply to raw milk products, which are very different from the commercial pasteurized, stabilized, homogenized cultured glop that comes in a plastic carton.

Although I could live without milk to drink, hubby goes into withdrawal, so I may buy either raw milk or commercial milk depending on the state of availability and my bank account. But I do freeze lots of butter and cream and may freeze cream cheese if I have enough space. I’m pretty well stocked up for butter, so most of the cream for the next week or so will go in the freezer to last until we have a new calf and a fresh dairy cow to milk around June.

4 Responses to Drying Up the Cow