In my world, real soup never sees the inside of a can. There’s always meat around to make broth with, whether it’s the meaty bone scraps from a beef, pork neck bones or a slightly tough chicken that turns tender when well-stewed. This recipe was originally created for stewing the old hen who didn’t lay any more or the excess roosters in the flock. My mother-in-law always made it when we went to visit and when my husband has a cold, he always asks for it. Smart man – the ingredients in chicken soup really do have some effect on the congestion of a cold. Onions, for example, are loaded with quercetin, which boosts the immune system. Originally, you would have had to go kill the chicken before you could make this soup, but in this more modern day we usually have some home-grown chickens in the freezer, so I’ll let you off that part. 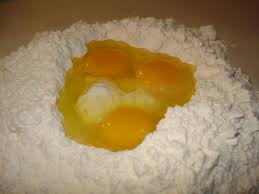 1 chicken, whole or cut up

Optional: garlic, 2-4 cloves (if I’m making this soup for myself, I add it, but hubby doesn’t like garlic as well as I do, so for him I leave it out)

Put the chicken on the stove and add enough water so it’s pretty much submerged (cut up chickens are easier to submerge and the pieces will cool off faster so you can get the meat off the bones without burning your fingers). Bring to a boil, skim any foam that rises to the top and then turn down to a gentle simmer — you want a few lazy bubbles to float to the top. Let it cook for 3 or 4 hours. Meanwhile, dump the flour into a bowl and stir in the salt. Drop the unbeaten egg on top of the flour and work it in well with your fingers until you have a fairly stiff dough. If the dough is more like cement, you can add a few drops of water. Roll the dough very thin, then roll it up like a jelly roll, slice into ¼ inch noodles and leave under a towel to dry until the chicken is done. Remove chicken from pot and let it cool. While the chicken is cooling, add the vegetables and sage to the broth. Bring to a boil and then turn back to simmer. I usually add some sea salt at this point. As soon as the chicken is cool enough to handle, shred and cut into spoon-sized pieces. After about 15 minutes, toss the noodles in the pot, bring back to a boil, then turn it down and let it simmer another 15 minutes, until noodles and veggies are tender. Add the chicken, let the meat heat up for a minute or so and then serve. This soup will keep in the fridge for at least a week. If you’re not cooking for a crowd, cook the chicken ahead and freeze meat and broth in individual or two-person servings. When you’re ready to make soup, make the noodles and let them dry for about 4 hours, then put the soup together. Noodles can also be frozen after they’re dried — don’t defrost but dump right into simmering soup.