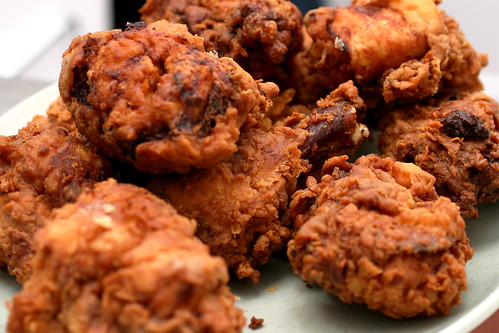 Everybody needs a go-to recipe for fried chicken. Portable, good hot or cold and absolutely delicious, this is mine. If you’ve already skipped ahead to the ingredients – no, it’s not greasy and it won’t make your arteries slam shut, despite what the low-fat diet proponents say in their brainwashing. It’s not a quick meal, because it takes time to brine it and then soak in buttermilk. This sort of recipe comes from the days when fried chicken was an older cockerel, maybe five or six months, instead of those six-week-old Cornish Cross behemoths you find in the grocery. The combination of brine and buttermilk make it tender. If you have home-grown chickens, your own buttermilk from your own cow, home-made butter and home-rendered lard from your own pigs – not to mention real country ham, also from your own pigs – you could serve this to the Queen of England and feel proud.

1/2 cup kosher or sea salt (do not use table salt, especially iodized salt, for brining)

1 quart buttermilk (fresh from making butter if you have it)

To make the brine: Stir kosher salt into cold water until dissolved. Place chicken parts in a nonreactive bowl or pot; add enough brine to cover completely. Refrigerate 8 to 12 hours.

Drain the brined chicken and rinse out the bowl it was brined in. Return chicken to the bowl, and pour the buttermilk over. Cover and refrigerate for 8 to 12 hours. Drain the chicken on a wire rack, discarding the buttermilk (I give it to the pigs or chickens).

Prepare the fat for frying by putting the lard, butter and country ham into a heavy skillet or frying pan. Cook over low heat for 30 to 45 minutes, skimming as needed, until the butter ceases to throw off foam and the country ham is browned. Use a slotted spoon to remove the ham carefully from the fat. At this point the ham is pretty well cooked to death, but you could save it to mix into next morning’s scrambled eggs for a little extra flavor.

Just before frying, increase the temperature to medium-high and heat the fat to 335 degrees. Prepare the dredge by blending together the flour, cornstarch, salt and pepper in a shallow bowl or on wax paper. Dredge the drained chicken pieces thoroughly in the flour mixture, then pat well to remove all excess flour.

Using tongs, slip some of the chicken pieces, skin side down, into the heated fat. Do not overcrowd the pan or the cooking fat will cool. You want at least half an inch between pieces. Fry in batches, if necessary. Regulate the fat so it just bubbles, and cook for 8 to 10 minutes on each side, until the chicken is golden brown and cooked through. Drain thoroughly on a wire rack or on crumpled paper towels, and serve.