Hooray for the Fruit! For some unknown reason, this looks as though it will be a banner fruit year (except for the cherries — the birds got most of those before I could get netting on the trees). We have two orchards, both neglected for years, that we are slowly bringing back into production. One is just below the house and the other is about half a mile away. I’m still not sure why the second one was located where it is, but it may be that it’s a relatively flat, grassy spot with subterranean water, too small for a pasture, but just right for a couple of dozen fruit trees. In addition, we have fruit trees (pear, apple and plum) scattered all over the 180 acres, from seeds dropped by birds or from the hand of a human who was noshing and chucked the leftover core or pit.

Then there are the blackberries and the grapes and the wild plums. The blackberries, of course, would pretty much take over without the annual mowing, burning and shoveling needed to keep them in bounds. Still, they consistently produce fruit with no intervention on our part. No weeding, pruning, tying, fertilizing (we wouldn’t dare!). Just saunter out in the cool of the morning come mid-July and spend a few hours picking. We nearly always get a blackberry crop. Even the year we had a massive hailstorm during their bloom period, we still got some berries.

The apples, pears and plums tend to bear in alternate years — of course, they all tend to bear heavily in the same year, so it takes a bit of scurrying to get thing processed. This year is a heavy year, which figures, since everything else is also producing. The apricot tree gave us over 100 apricots; enough for at least one recipe of jam as well as lots of fresh eating. We’ve never gotten more than a couple of dozen before. Mind you, we’d probably get more if not for the ground squirrels’ habit of climbing the tree to eat the blossoms. My daughter, who enjoys apricots, shoots the furry little @#($%* out of the tree when she catches them at it. The Meyer lemon has lots of small green fruits.

The strawberries did OK, and for the first time since we bought the place, the wild plums have produced a crop. I have no idea why we’re having such a good year. It wasn’t a very good rain year, we had a frost in the middle of May that got a bunch of the grapes, then the weather turned hot almost immediately after the frost and climbed to about 104. On the plus side, we did seem to have lots of bees. The ideal fruit year, according to the experts, is a gradually warming spring with just enough rain at well-spaced intervals — bees and other pollinators just love that sort of weather. My fruit trees and bushes apparently don’t listen to the experts. However, I’m not going to look a gift horse in the mouth. I’m going to pick and process and preserve and can and freeze and count my blessings. 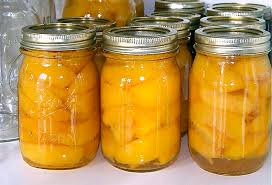 1 Response to Hooray for the Fruit!