Clavibacter michiganensis subsp. Nebraskensis – quite a mouthful, isn’t it? More familiarly known as Goss disease, it’s a bacterial infection of corn that enters the plant through any sort of damage to the leaves. Winds, heavy rain and hail can all cause such damage. It doesn’t necessarily kill the plant, but it definitely reduces the yield. Goss disease is something new – most farmers had never seen it until about five years ago, according to an article in the New York Times.

You may be saying, so what? Well, so what is that about 10 percent of this year’s corn crop is going to be affected in Iowa, and the disease has spread rapidly from Nebraska and a small part of Colorado to Iowa, Illinois, Indiana and Wisconsin in the last five years. Corn farmers are growing more corn for ethanol — a terrible waste of good farmland that expends more energy in the growing than it ever produces — and planting genetically modified hybrid corn that isn’t resistant to Goss disease. Corn, you may remember, is wind-pollinated, which means that the non-resistant GMO corn can contaminate other corn, such as heirlooms. Not only are they using GMO corn, they’re dropping some of the traditional management practices that help to prevent the spread of disease, such as rotating corn with another crop. No-till farming, touted as better for the soil but which relies heavily on the use of herbicides, may also be spreading the disease as it leaves crop residue in which the bacteria can overwinter. Heavy rains are probably also to blame for spreading the disease, not to mention making soil erosion worse. 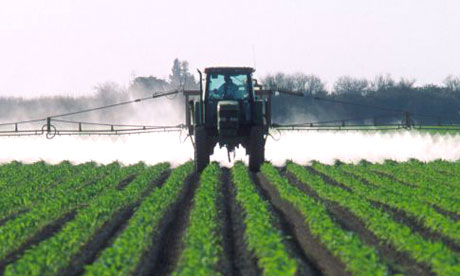 Yes, the U.S., despite weather and disease, looks to be having a good corn year. But at what long-term cost to the soil and the overall health of the land, not to mention the humans who depend on it? Agricultural practices matter to all of us. When GMOs, climate change, and farming practices all favor the spread of a disease, we should be taking notice. In addition, we should be thinking about how we can protect ourselves and our children from the inevitable fall-out of poor decisions across the board.