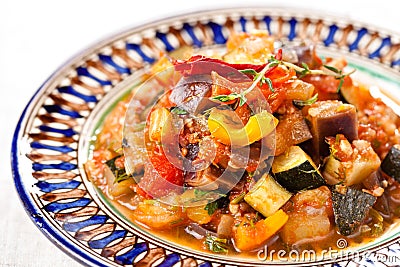 Ratatouille might be hard to pronounce, but the dish itself is the essence of ease. Chop up some veggies, douse with olive oil and sprinkle with fresh herbs after you cook it a while. It’s not only old-fashioned; it’s probably ancient, as it was first created by poor farmers in the Provencal region of France. It’s a summer-only dish, wonderful for dealing with the glut of summer squash (originally, summer squash was the main vegetable – eggplant was added later), eggplants and tomatoes we all face once the garden really starts to produce. Ratatouille is flexible – too few eggplants, no big deal, add a little more zucchini. Tiny garlic cloves – shove them through a garlic press unpeeled (you have to clean out the skins after each squeeze). Although some cooks might call it heretical, I’ve added carrots, celery and green onions on occasion. It’s a good dish for a lazy cook – no peeling, just a quick wash, chop and toss, then into the pan. And it cooks unsupervised. Finally, it can be served hot, warm, cold or room temperature. Oh, the word is probably a combination of “rata,” which means “chunky stew” and “touiller”, a French verb that means “to stir up.” It’s pronounced “rat-oo-y.” The only disadvantage I can think of with this dish is that my other half doesn’t like it; however, it does mean I get his share!

Roughly equal quantities by volume of eggplant, tomatoes, onions and summer squash, roughly chopped (classic ratatouille also has sweet peppers in it, but I can’t eat them, so I leave them out. You can add if desired, but I can’t give you a recommended quantity because I don’t know how they’ll affect the taste. Try adding two or three chopped peppers and see how you like it. Adjust from there.)

Olive oil to taste – the amount will depend on how much you have in the way of veggies, but figure ½ to ¾ cup.

Slivered, crushed or chopped garlic – I think crushed is the best choice, because it releases more flavor and is easy to distribute into the dish by stirring. By the way, to get maximum effect from allicin — the immune-system enhancing compound in garlic — press and let rest for 10 minutes before you put it in the pan to cook.

Mix all the ingredients except herbs in a big bowl, so the veggies are well-oiled. Dump into a baking pan and cook, covered, for about an hour at 350 degrees, or until the vegetables have softened and released a lot of juice. At this point, it looks like soup, but fear not; take off the cover, stir in the herbs and put it back in the oven for another hour or until most of the moisture has evaporated. Add salt and pepper to taste.