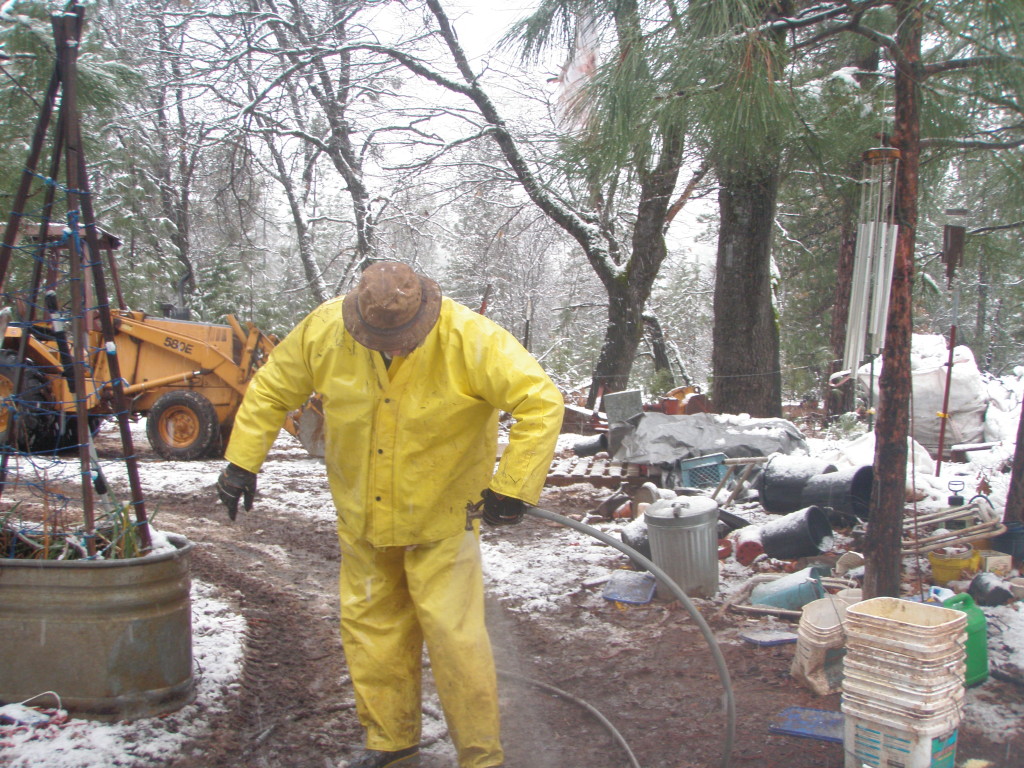 On him, even a zoot suit looks good!

The rainy season is finally upon us — which is terrific, as anyone who doesn’t live in a closet knows California is in the grip of the worst drought ever. However, rain does mean that it’s time to get the zoot suits out of storage. Zoot suits probably have some sort of official name, but since they are bright yellow, rubber and decidedly not fashionable, I go with my own label.

A zoot suit is a two-piece garment consisting of a pair of overalls and a jacket. They are made large enough so you can wear your regular clothes under them. Supposedly, they are unisex. However, I am not anatomically designed to use that handy little slit in the front, and they are clearly cut for someone with considerably less bosom than I possess. And frankly, I doubt that any female would have chosen the color, which is the exact shade of Big Bird’s feathers.

From the standpoint of keeping the rain off you, zoot suits are great (although they do tend to let a few trickles in around the collar). They are easy to hose off should you fall in the mud — which you do, since they are not made to support graceful movement. In fact, once you don a zoot suit — especially in the winter when it’s cold as well as wet — you resemble a Pillsbury Doughboy, except you’re yellow instead of white. Add a pair of rubber boots, and you walk like Big Bird in concrete overshoes. I bent over the other day and discovered that I had enough intervening zoot suit that I couldn’t reach the shoelace I was trying to tie.

There are various ways to don a zoot suit. Not the coat, it’s easy. But the overalls come all in one piece. They have neither zippers nor buttons. You must insert one foot into the leg, pull the pants high enough to reach at least mid-thigh, and then insert the other foot into the other leg and work them up to breast level. In the process, however, you’re quite likely to overbalance and fall on your rear. Not to worry, as they’re actually easier to get on sitting on the ground. I have also found that if you sit in a chair and spread them in front of you, you can pull them up one leg at a time fairly easily. Of course, then you have to stand up, with the overalls at mid-thigh. You can’t take a step forward, because in that position the overalls don’t allow that much movement, and if you lean back, you’ll fall into the chair. You need excellent balance and quadriceps muscles like rocks to don a zoot suit without injury.

Having donned the zoot suit, there are some things you don’t do. You don’t run, partly because the suits are a bit constricting, and partly because they’re made of rubber. Even when it’s below zero, you’ll be sweating like a waterfall within 30 seconds. As noted earlier, you don’t bend over — although you can squat fairly easily, assuming you have those rock-hard quads mentioned earlier. You can’t scratch an itch unless it’s on exposed skin. If you’re female — also as noted earlier — you don’t take a bathroom break. Just imagine trying to do the zoot suit dance out in the woods. The wildlife would die laughing. But the biggest nuisance for a rancher is that you can’t get into your pants pockets, where you carry such useful items as the pocket knife you use to cut the strings on the hay bales. Pockets? Oh, zoot suits don’t have pockets — another design flaw.

Getting out of a zoot suit isn’t much easier than getting into them. Again, the coat is easy: unsnap and take it off. The easy way to get the overalls off is to sit down and pull them straight off your legs. I don’t know about you, but my arms would have to be at least six feet longer to pull the overalls straight off my legs. When you try to pull them off by bending your leg so you can reach the hem, they bunch up behind your knee and won’t slide down your leg. If your husband isn’t laughing too hard to help, he can do it for you. And if he is laughing too hard to help, give him a good kick with the bent leg. So you usually wind up sitting down and gradually peeling the things off, one leg and one inch at a time. Of course, they’re always wet and often muddy, so the protective effect — which was why you put them on in the first place — is a bit diminished.

Sometimes I think I’d rather just get wet.