Variations on a Waffle 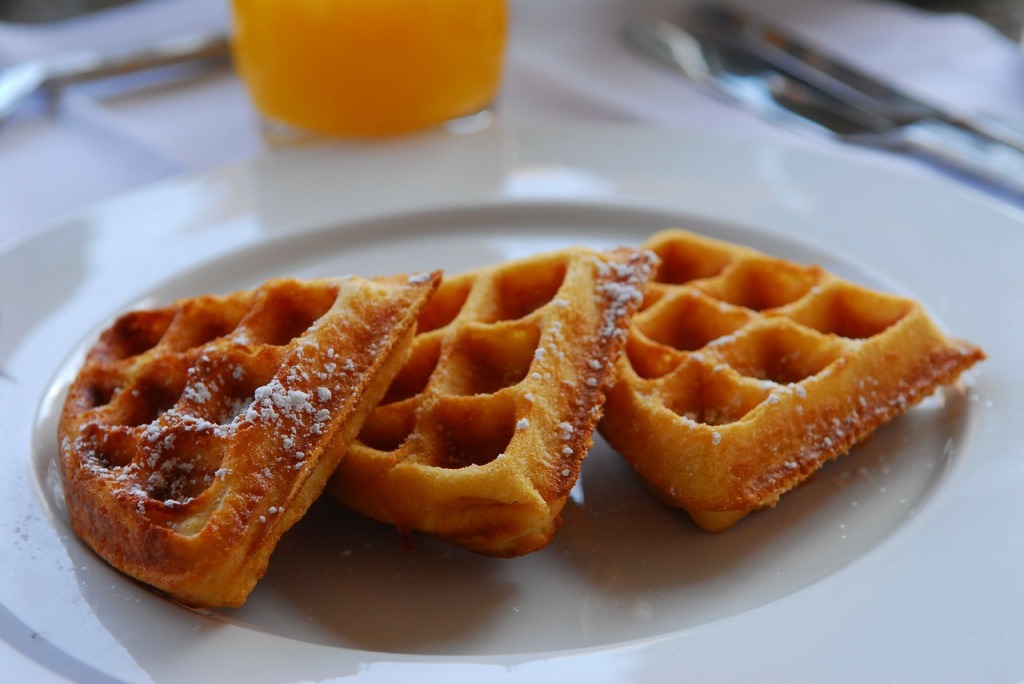 When you cook from a pantry, as I do, flexibility is the name of the game. There’s no way I’m going to drive 25 miles or more to get ingredients on the spur or the moment. So I stock up and use what I have on hand. However, pantry cooking does mean that the time will come when you’re missing some or all of a particular ingredient for a dish.

Let’s say you have your heart set on waffles. Waffles are basically flour, some sort of liquid (almost always dairy, although the very first waffles were more like communion wafers – flour plus water), fat, eggs and leavening. If you’re completely out of flour, sorry – you’re out of luck. But that’s the only crucial ingredient, and if you have even one cup of flour, you can usually manage to make some sort of waffle. The liquid can be milk, buttermilk, cream, yogurt, sour cream or a combination. Fat can be butter, cream (also doing dual duty as liquid), liquid oil, or coconut oil. Cooks in previous generations also used lard — it could really be almost any kind of fat, although some will affect the taste of the waffle.

Mashed Potato Waffles (from Moira Hodgson writing in the New York Times)
• 2 russet potatoes (total weight about 1 1/4 pounds)
• ¼ cup extra-virgin olive oil
• 1 small onion, peeled and finely chopped
• ⅔ cup milk
• Salt and freshly ground pepper to taste
• 2 large eggs
• 1 cup all-purpose flour
• 2 teaspoons double-acting baking powder
1. Peel and wash potatoes. Cut into small, even pieces and put them in large pot of cold, well-salted water; bring to boil. Lower heat and cook until you can pierce potatoes easily with fork. Drain and reserve about half a cup of potato water. Transfer potatoes to large mixing bowl.
2. Heat olive oil in small skillet over low heat and sauté the chopped onion just until it softens a bit. Pour the oil and onions over the potatoes, then add the milk to the still-warm skillet — just to take the chill off it. Pour the milk over the potatoes.
3. Mash potatoes with oil and milk. Add a fourth cup of warm potato water, reserving the rest, and continue to mash until the mixture is smooth and looser than mashed potatoes you’d serve as a side dish. If it seems stiff, add more potato water, little by little, until you reach the desired consistency. Taste and season liberally with salt and pepper.
4. Preheat your waffle iron. If you want to hold the finished waffles until serving time, preheat your oven to 200 degrees.
5. Finish the batter by beating the eggs into the potatoes. Whisk together the flour and baking powder and fold them into the potatoes with a rubber spatula.
6. Lightly butter or spray the grids of your waffle iron, if needed. Brush or spray the grids again only if subsequent waffles stick.
7. Spoon out a half cup of batter (or the amount recommended by your waffle iron’s manufacturer) onto the hot iron. Smooth the batter evenly almost to the edge of the grids with a metal spatula or wooden spoon. Close the lid and bake until brown and crisp. Serve the waffles immediately or keep them, in a single layer, on the rack in the oven while you make the rest of the batch. Top with basil or rosemary olive oil or butter.