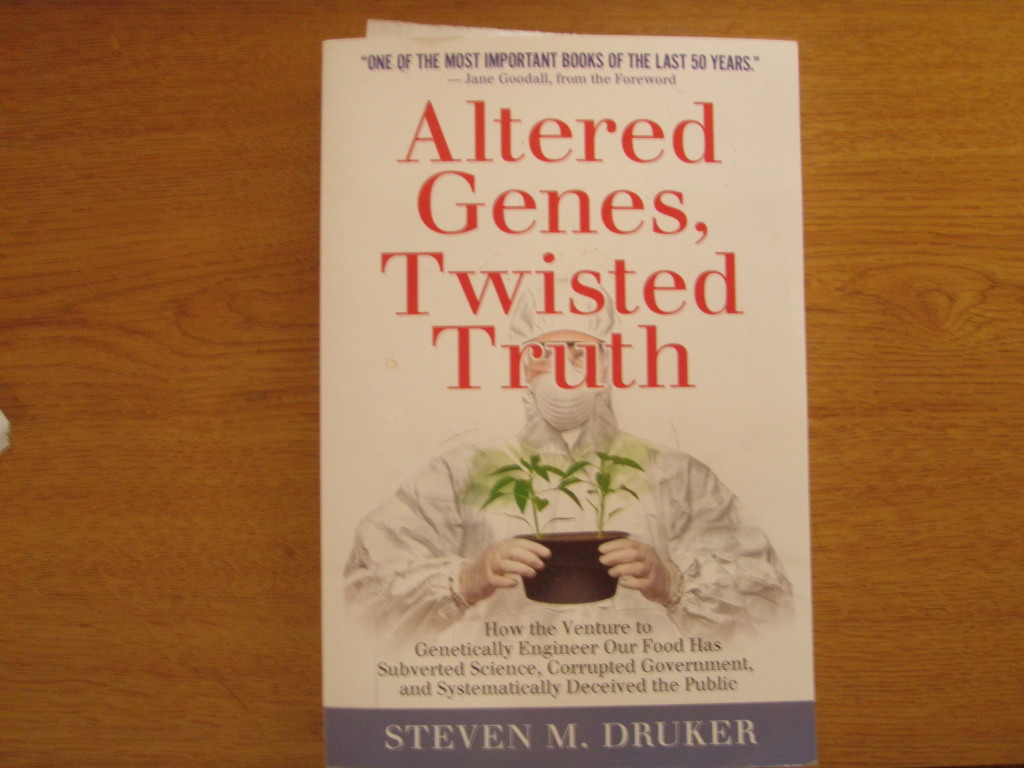 I’ve just finished reading the book above. Although I’ve been pretty sure for a long time that the official spin on GMO foods was misleading, Steven Druker’s book was an eye-opener. Druker is a lawyer who (along with a number of other concerned citizens) sued the US Department of Food and Agriculture to release its files on genetically engineered foods. In the process, he realized that there was a vitally important story to get out to the rest of the world, so he wrote this book. Among his (extremely well-substantiated) findings:
1. Scientists in the field of molecular biology deliberately manipulated the public and their fellow scientists on the subject of transgenetics. Transgenetics occurs when you take a gene from a species such as a zebra and insert it into a completely unrelated species such as a tomato. Many people defend transgenetics (a more accurate term than genetic modification) as being the same sort of thing that happens in the natural world with breeding and selection. Hmmm — I don’t know about you, but I seriously doubt that mama zebras are birthing tomatoes. By the way, this was long before Monsanto got into the picture and started manipulating foods. Once Monsanto got on the bandwagon, however, the picture got blacker and blacker.
2. The scientists in favor of transgenetics made it look as though there was no disagreement in the scientific world about whether transgenetics was risky. Totally untrue. Those who spoke out against it, however, were vilified, ignored or otherwise silenced — often by their peers, respected scientific organizations or professional journals.
3. When the USDA got into the act, it ignored the objections of its own scientists in putting forth a political agenda.
4. Worse, the USDA actually broke the law in exempting GMO foods from testing.
5. The media colluded in the process (are we surprised?) as did many politicians (ditto).
6. There IS darned good evidence that GMOs — especially in food — are very risky for people, and especially for children.

I’m not going to go into any more detail, because you can read the book for yourself.
I strongly urge you to so. It should damn well make your blood run cold.