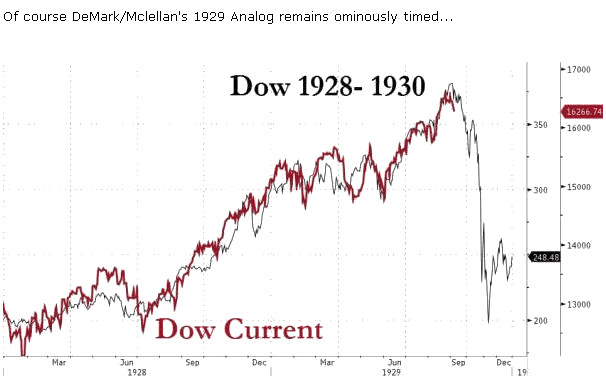 Interesting comparison, and way overdue for a correction.

Growing older is supposed to make you older and wiser.

While that may be true in some cases, growing older at least means you have more experience. You get a lot better at sniffing the air and realizing something’s burning, even if it’s still a way off. If you are also a student of history (as I am) you also learn to recognize patterns that are similar to those of previous events. I’m seeing a number of those patterns going on right now.
The volatility in the stock market is very similar to what happened in 2008, when the Dow lost $1.2 trillion in value. The pattern, as you can see from the chart above, is also very similar to 1929. Even if you don’t have any money in the market, this is important. We no longer have a free market in America, because the game is rigged and the market has been kept alive primarily through federal bail-out money. Bankers may be getting rich (and many are) but the average American is struggling. Right now, the market — in the opinion of people who know a lot more about it than I do –pretty much is the economy, because the rest of the economy isn’t doing much of anything.
Economic numbers have been so massaged, spun and outright falsified that you cannot believe any official pronouncements about the state of the economy. I suggest you take a good hard look around your community. How much construction is going on? How many homes are for sale and how long have they been for sale? How many empty spaces do you see in shopping malls or business locations? When’s the last time you got a decent raise — or any raise at all? How many of your daily expenses have gone up in the last couple of years, especially the basics of food, shelter and utilities? Do you have more homeless in your community than you did a few years ago? How many of the children in your school qualify for free or reduced lunch?
Cities, counties and states are almost all struggling financially. Pension plans can’t meet their obligations. Banks don’t pay any interest on savings. Nor can you make anything on bonds. People are financing their lives (as does our government) by going into debt. On another front, although we have a temporary glut of oil — primarily because of low demand — the peak oil issue has not gone away.
I could go on, but you should be able to see the picture. Don’t take my word for it. There are a number of websites out there that can give you chapter and verse. Peak Prosperity is one of the better ones and can give you a broad picture as well as suggestions for what to do. Read Dimitry Orlov to learn what happens when a society unravels. The Resilience website offers another broad educational picture. Read Aftershock by Robert Wiedemer  and colleagues (by the way, they don’t seem too concerned about the possibility of civil unrest if the system falls apart; I think they’re off base).
Expect that things will get much worse before they get better and start preparing, NOW. Do you have enough food to last through the winter (and preferably for a year)? What happens if gas is rationed? Or your bank account is frozen by the government as happened in Greece? Are you dependent on prescription medications (there may be other options, such as herbals, supplements and changing your diet)? Do you even have a working flashlight around if the power goes out (most of the people who went through the New York blackouts in 1965 and 1977 never even bought a flashlight after the fact)?

As the Barbra Streisand song says: “good times and bad times, I’ve seen ’em all and my dear — I’m still here.” Those of you who were Girl Scouts or Boy Scouts remember the motto: Be Prepared. Good advice, especially these days.

This entry was posted in Freedom, Money Matters and tagged be prepared, blackout, economy, stock market, the dollar, The Fed. Bookmark the permalink.