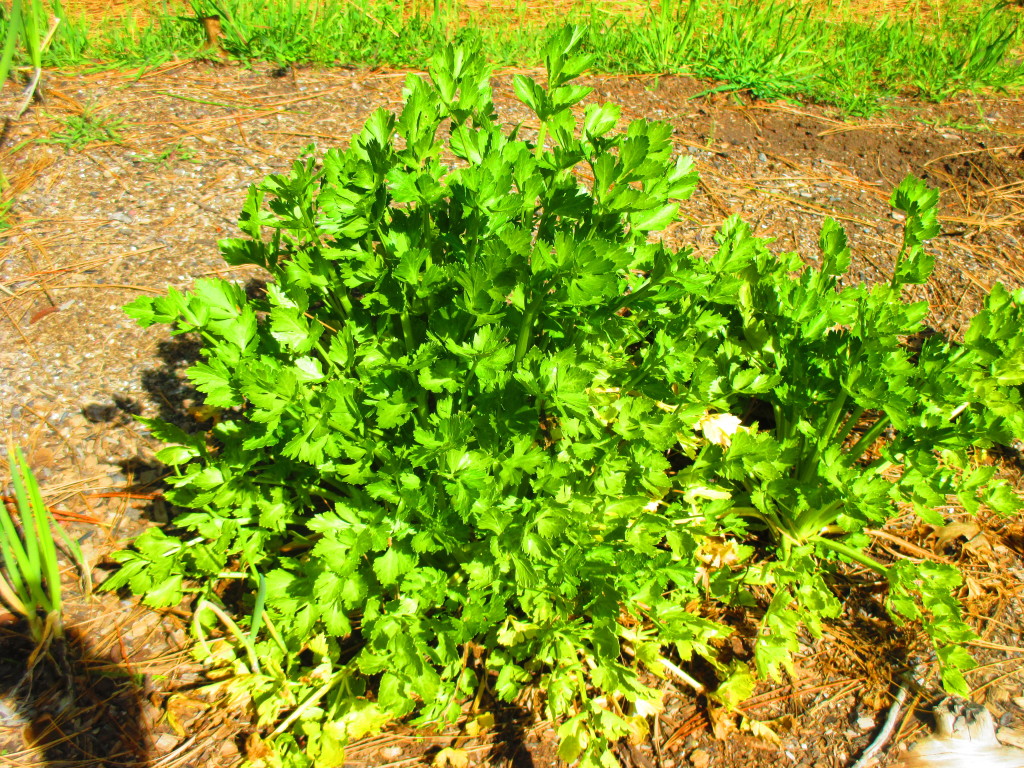 This celery is a bit stronger-flavored than the store-bought stuff, but it’s great in cream of celery soup.

In this modern-day-take-it-out-of-the-freezer-and shove-it-in-the-microwave world, we often lose sight of what real food tastes like. Not too surprising, when you look at the ingredient lists on most prepared foods. Many so-called foods have more chemicals than food ingredients. I figure if you can’t even pronounce half the ingredients, you shouldn’t rely on it as a major food source. On the other hand, just think about beef stew or chili simmering slowly through the day, ready to warm the cockles of your heart – not to mention your cold hands – come dinner time. Or home-made breakfast burritos or Cornish pasties, stored in the freezer for those mornings when you can barely find the kitchen, let alone think up a menu.
If there’s a perfect ranch wife meal, it might be soup. Endlessly versatile: some sort of liquid as a base; veggies (always including onions and usually including garlic); meat, cheese or eggs for protein; and rice, noodles or potatoes for starch. Soup is also very useful when you’re trying to cook with the seasons. Spring is cream of asparagus, summer is cream of tomato, fall is cream of squash and winter can be cream of carrot or kale. Soup can be made with leftovers. For that matter, it’s one of the best ways to use up leftovers, and soup itself makes a good leftover – make a big pot and eat from it for several days. Even the male of the species will be well-satisfied with a thick, meaty Tuscan kale soup loaded with sausage, or potato chowder to which the canny ranch wife has added bacon or chorizo.
Cream soups are a good way to use up all that nice thick cream supplied by the family milk cow. Cream soups are also good for camouflage. When you’re trying to get a kid (or a recalcitrant husband who thinks greens stop with lettuce) to eat something exotic like lacinato kale, a cream soup often entices them into experimentation. Add some well-buttered corn bread, biscuits (cream biscuits are another way to use up all that extra cream, and they freeze well, so you can transfer them straight from freezer to oven) or garlic bread. While the soup doesn’t freeze well once the cream has been added, the base typically freezes just fine unless it also has potatoes in it. You can take pretty much any cream soup recipe to the point where the veggies are not quite fully cooked, chill and freeze in meal or cup-size portions. When you want soup, defrost the base, bring it to boiling and stir in cream. I particularly like to use that method with asparagus. The stalks are often a bit chewy if just steamed, but cooked and run through a food processor, with the usual additions like onions, they are easily frozen for cream of asparagus soup. I save the cooking water from the asparagus tops to add to the stalks, which intensifies the flavor.
Although chowders can be cream soups, the reverse is not true. Chowder almost always means the inclusion of potatoes, while cream soups may be made with a flour/fat/milk base (officially called a roux) or have no additional thickening beyond the cream. If you want to store a chowder in the freezer, put in everything but the potatoes and cream. Cook until the vegetables are about five minutes short of fully cooked, cool and freeze. When you’re ready to make the chowder, cut potatoes into eating size chunks, cook until just soft in minimal water. Meanwhile, bring the defrosted soup base to a simmer. Once the potatoes are cooked, drain (save the water for bread-making), add to the soup base and give it good stir. Take off the heat and stir in cream; it should be just eating temperature.

Heat a large, heavy soup pot over medium heat. (You’ll need a pot big enough to hold all
the kale before it wilts down.) When hot, add the oil, then the onions, and season with
salt and pepper. Cook, stirring occasionally, for ten minutes, or until the onions are soft.
Add the kale, season with salt and pepper, stir, cover, and cook for 5 minutes. Remove
the cover, stir in the wine/water and stock, and bring to a simmer. Cook at a gentle simmer for
about 30 minutes, stirring occasionally, until the kale is extremely tender. Carefully puree in small batches in a blender or food processor, or using an immersion blender. (If you’re freezing, stop at this point, chill and put in freezer containers. Thaw, heat to boiling and add cream.) Otherwise, add the cream and heat slowly to serving temperature.

Process broccoli, celery and onion in food processor until in small bits. Saute vegetables in butter until tender. Add the broth, garlic salt and pepper; bring to a boil. Reduce heat; cover and simmer for 5-7 minutes or until broccoli is tender. (If you’re freezing, stop at this point, chill and put in freezer containers. Thaw, heat to boiling and add cream.) Reduce heat to low. Stir in cream; cook 5 minutes longer or until heated through.

Brown the sausage in olive oil over medium heat until no longer pink. Add the red pepper flakes, garlic and onion and cook, stirring often, until the onions are translucent and the garlic is fragrant, about 4 minutes. Add the chicken broth, potatoes and kale (or hold the potatoes and use the technique above to freeze the soup base for later). Bring the broth to a simmer, reduce the heat to medium-low, and cook until the potatoes are tender, about 10 minutes. Remove the soup from the heat, stir in the cream, and season with salt and pepper to taste. Ladle into soup bowls and serve.