In the course of my career as a ranch wife, I’ve bred horses, cows, sheep, chickens and dogs. Over the years years, I’ve learned a bit – and the absolute most important lesson is to breed for function.
Now, that may seem like an oxymoron, but I’ve seen the Quarter Horse, Paint and Appaloosa breeds contaminated by a single stallion who was pretty but passed on major congenital problems. The stallion Impressive was indeed a gorgeous animal, and when I first saw him I thought it might be nice to get his blood in some of my stock. Then I learned he had a congenital condition called pedal osteoitis that causes chronic laminitis, an inflammation of the hooves. In other words, Impressive couldn’t perform — couldn’t race, couldn’t work a cow, couldn’t be a trail horse — all of the things Quarter Horses are bred for and supposed to do. That turned me off immediately, but not his owners; they turned him into a halter horse, which meant he walked around an arena and stood pretty, and was judged entirely on his looks. His stud fee was $25,000 (this was in the 1970s and 1980s), and he still sired over 2,000 foals. Time flies when you’re having fun, and some years on, horses started developing a painful, often fatal disease called hyperkalemic periodic paralysis (HYPP). All traced back to Impressive; he and he alone caused the problem. I thanked my lucky stars that my obsession with breeding for function (horses that are sound enough to perform) had kept his genes out of my herd. 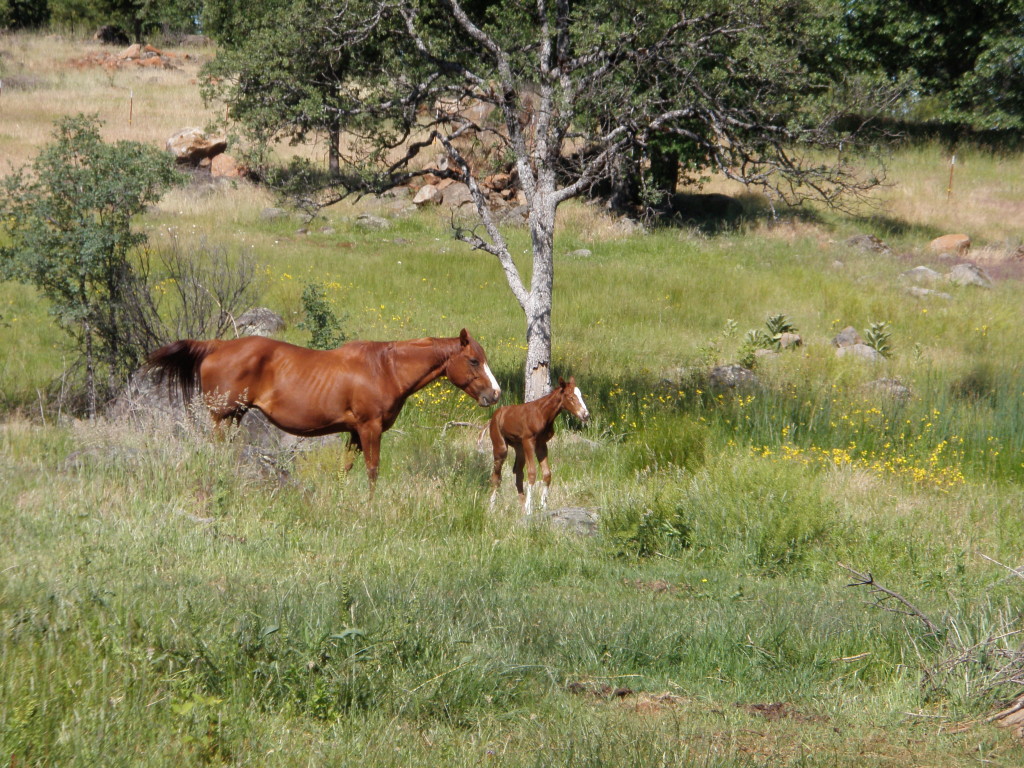 This filly looks like her front legs aren’t straight. We worried for a while, but it turned out she was just so big, she’d been cramped in the mare’s uterus; she now has straight legs.

Impressive is a classic example of not breeding for function, but I’ve watched breeders take a horse that was injured either specifically because of a confirmation defect or because it had a conformation problem that contributed to the injury, and turn it into a brood mare or use it as a stallion. I’ve seen ranchers breed pedigree Herefords for other characteristics to the point that the cows didn’t have enough milk to raise a calf; the breeder sold these cows with a nurse cow so the calf wouldn’t starve (true story, I kid you not). I’ve seen Quarter Horses and Thoroughbreds with so little bone and such small feet that it’s no wonder they broke down. Holstein milk cows are bred for such high production that the cows have very poor longevity and low resistance to disease; they’re often worn out at age five, when a good family cow is just hitting her stride. That family cow will probably keep right on producing for another six or seven years, if not more. I’ve seen chickens that are egg-laying machines but incapable of perpetuating themselves because they won’t set and no longer have any mothering instinct. They’re dependent on humans to keep the breed going. 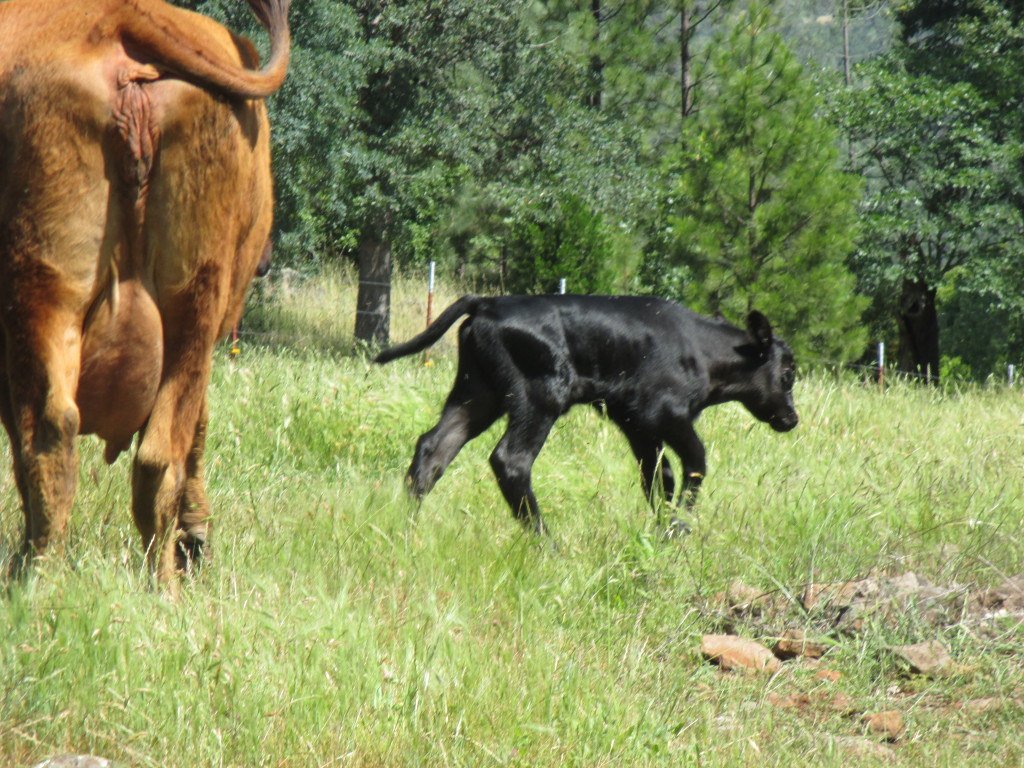 No one needs to send a milk cow out with this old girl; she’s got a bag almost as big as my Jersey’s!

So what does it mean to breed for function? Well, it depends on the animal. Let’s take single example in a horse — a riding horse like the Quarter Horse. One of the reasons I love this breed is that it’s so versatile. In order to be versatile and stay sound for many years, a Quarter Horse needs adequate bone to support its weight (many Quarter Horses weigh in at 1,200 pounds) and carry a rider plus tack, and hooves large and sturdy enough to support its body. In the foreleg, measuring the cannon bone just below the knee gives a good indication of weight-bearing ability. A 1,000-pound horse should have an absolute minimum of one inch of circumference for each 142 pounds of body weight; a 1,200 pound horse should have a cannon bone that’s at least 8.5 inches in diameter. And actually, more is better, because the horse has to carry a rider and tack. I like a 1,200 pound horse to have closer to 9 inches. What is happening all too often, however, is that “pretty” Quarter Horses are being bred with smaller bones and hooves, increasing the risk that they’ll break down. 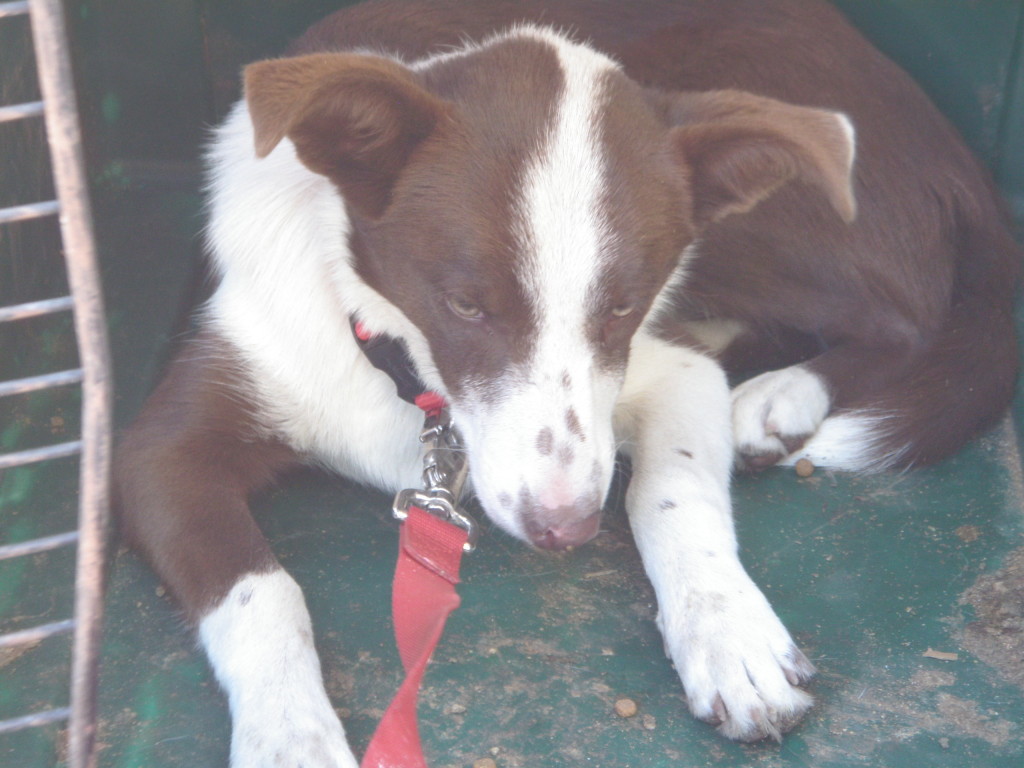 I got this pup because she has a congenital eye problem; she’s smart and a great family dog, but would never make it as a working cow dog.

So, OK, I’m ranting a bit here, but breeding for high-quality individuals should mean overall quality: good conformation that supports their primary function, strong immune systems, good mothering ability or other strong reproductive characteristics like the inclination to set on eggs in chickens, intelligence and other “mental characteristics” like heart, willingness to work and a good disposition. Any time breeders start down the road of chasing a single characteristic — be it speed, color, “pretty” or egg-laying capability — to the exclusion of everything else, odds are it’s not going to end well.