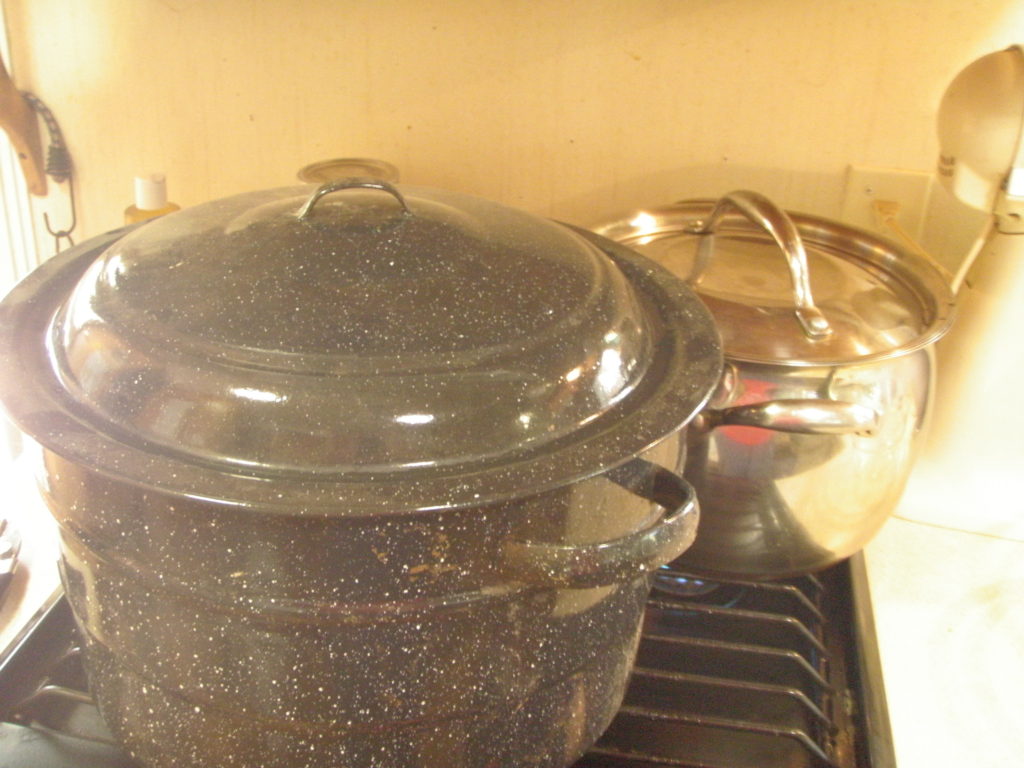 Those of you who have been reading for a while have probably seen some of the conversations about food safety, canning, and the like we have been conducting on the blog. For those who haven’t, here’s the basic theme: canning manufacturers, scientists and government entities have increasingly intensified their recommendations about home food processing. For example, many of us participating in the discussion have been making jams and jellies or things like zucchini relish without a water bath for many years without harm. However, the current recommendations are that home canners should waterbath jams and jellies for at least five minutes; some authorities recommend 10 minutes. Recommendations on waterbathing zucchini relish range from 0 to 25 minutes. Many of these authorities also recommend canning fermented foods.
So who is right? Well, let’s think about this for a minute:
1. The first thing to strike me is that canning recommendations (and these are from sources like jar manufacturers, the USDA and university home economists) range from not at all to 25 minutes for the exact same recipe. So there is obviously a great deal of leeway in this whole processing/putting up foods debate. Other variables are in cooking time; for zucchini relish — since that’s what we’re talking about at the moment — cooking times range from 10 to 30 minutes.
2. The second thing to strike me is that the rationale for longer canning times is to prevent botulism. Now, I’m not shrugging off the seriousness of botulism — it’s very dangerous stuff, especially to infants, who are the most likely victims. However, botulism in infants nearly always results from feeding them honey before the age of one year, meaning their immune systems are still developing. The last bad botulism outbreak in the US occurred in 2015, with 25 of 77 attendees at a single church potluck showing botulism symptoms. In comparison, in 2014, 20 of the 177 cases of botulism reported to the CDC were caused by food (most of which was from typical native Alaskan food like fermented seal meat). Botulism infection really isn’t a very big problem in the US. You’re a lot more likely to get an infection in the hospital — 722,000 hospital-acquired infections in 2011, according to the most recent CDC report.
3. All the potluck folks had eaten either commercial or home-made potato salad. Five of the 11 potato salad specimens recovered from the church dumpster after the potluck were contaminated with botulinum bacteria. Mind you, as near as I can tell, the specimens weren’t collected for at least two days after the potluck; not exactly ideal storage conditions. The CDC put their attention on the potato salad made with home-canned potatoes. The woman who brought it had waterbathed the potatoes and had not heated them after removing from the can/jar (boiling canned food for 10 minutes neutralizes the botulinum toxin). I can’t tell from the report whether the scientists confirmed that the homemade potatoes were definitely the cause or whether they made that assumption. Nor can I tell whether any of the remaining 52 attendees had eaten potato salad and didn’t get sick. I suspect there were some who did eat the potato salad, which raises the question of why they didn’t get sick (see Canning and Gut Instincts – Part 2, for some speculations (coming soon).
4. Canned potatoes are very different from things like zucchini relish. For a start, the relish contains salt, and in most cases, vinegar, both of which act as food preservatives. Second, the bits and pieces of shredded vegetables are a long way from large, dense chunks of potato. It’s much harder to ensure dense foods are thoroughly cooked. That’s one reason many canning books discourage canning foods like potatoes and winter squash (and this is a point on which I agree with them, by the way). Third, the zucchini relish is well-cooked, even if it’s only simmered for 10 minutes, and placed in hot, sterile jars.
The moral of the story? Basic canning precautions make very good sense. Wash your food, cut out bad spots, cook the food well and boil jars and lids. Work fast so the food and jars stay hot until you put on and tighten the lids. Ensure a good seal by checking the jars when they cool, and store them properly. When you’re ready to use the food, pay attention to things like whether the seal is still tight, and to how it looks and smells. DON”T eat suspect food or allow your animals to eat it.
But if you’re using a recipe that you’ve used for 30 or 40 years without problems, I really don’t think you need to be paranoid about the fact that the USDA or Ball says you should waterbath for 30 minutes when you’ve always done it for 15. And of course, where jams and jellies are concerned, I personally think the recommendations for waterbathing — even for five minutes — are overkill. BUT, you should collect and review the information and make up your own mind.