Middle granddaughter drew the straw for naming this one and has settled on Violet.

Christmas presents come in all sizes, shapes and colors. One of our special presents this year was the little gal in the photo above. We had a typical Christmas morning with presents and early afternoon feast, then took it fairly easy for the rest of the day. The oldest granddaughter (Rha-Rha the right hand ranch hand) and I were headed down to do evening chores when I spotted Maybelle the milk cow in the typically hunch-backed position that means a cow is in labor. We’d been pretty sure she was very close and had been keeping an eye on her.
I sent OGD back to the house to get hubby, as we still needed to feed even if Maybelle was calving, and it would be dark in about 30 minutes. I was a bit concerned since it looked to me like the cow was straining but not getting anywhere. Usually, once the calf enters the birth canal and a cow starts to push, it only takes about 30 minutes for the calf to be born. The normal birthing position is front feet first with the head laid down on top of the legs, and that’s the position the calf was in – much better than a hind foot presentation or having the head turned back when the front feet are leading. Maybelle continued to push for the 20 minutes or so before hubby got there and it was pretty clear she’d been at it for a while, so we decided to pull the calf.
To pull a calf, you wrap small chain around the legs in a figure eight, hook the chain into a handle of some sort and put a hay hook through the handle. Hubby did the honors, since he has the upper body muscle strength, while my daughter and I controlled the cow (who was NOT happy!) and OGD dutifully hung onto the mucky tail (I could hear her muttering e-wwww under her breath) and the flashlight. Within five minutes we had a calf on the ground, being rubbed with towels to stimulate her breathing, while her mama applied an additional washcloth effect with her tongue. Hubby proclaimed “It’s a heifer!” and I was delighted, as I really wanted a heifer. This baby’s father is out of our Angus cow, Strawberry, who produces darned near as much milk as a small dairy cow and raises top-notch calves. We hung around while mom and baby got acquainted and after a couple of hours finally went inside to warm up (temps were in the 20s that night).
When I went back down the next morning, the calf had obviously been up and around – she was outside the fence. I carted her back in and checked Maybelle, who did not look as though she had been suckled. So I traipsed back for hubby and we went down to give the little one a nursing lesson. In most cases, instinct takes care of the first feeding, but Maybelle isn’t a very tall cow and her bag was so swollen her teats were only about a foot off the ground. The baby was trying, but she couldn’t figure out why – when she was in the correct position – she couldn’t find the teat. I held the cow while hubby milked her out enough to get the flow started and then pushed the calf into a position where she could find a teat. After a while, his back cried “uncle” and we traded. Took us about 30 minutes to get a cup or so of colostrum in her, which is critically important, as a calf that doesn’t get colostrum in the first 24 hours has no disease resistance.
Tuesday, we milked the cow and started the baby on a bottle. We got more colostrum into her and she nursed pretty well. I reminded my daughter – who was sitting in the straw holding the bottle with the baby half in her lap – that when she was a teenager, she was frequently given to proclaiming she was NEVER going to live on a ranch. For some reason, she stuck her tongue out at me and told me to shut up. 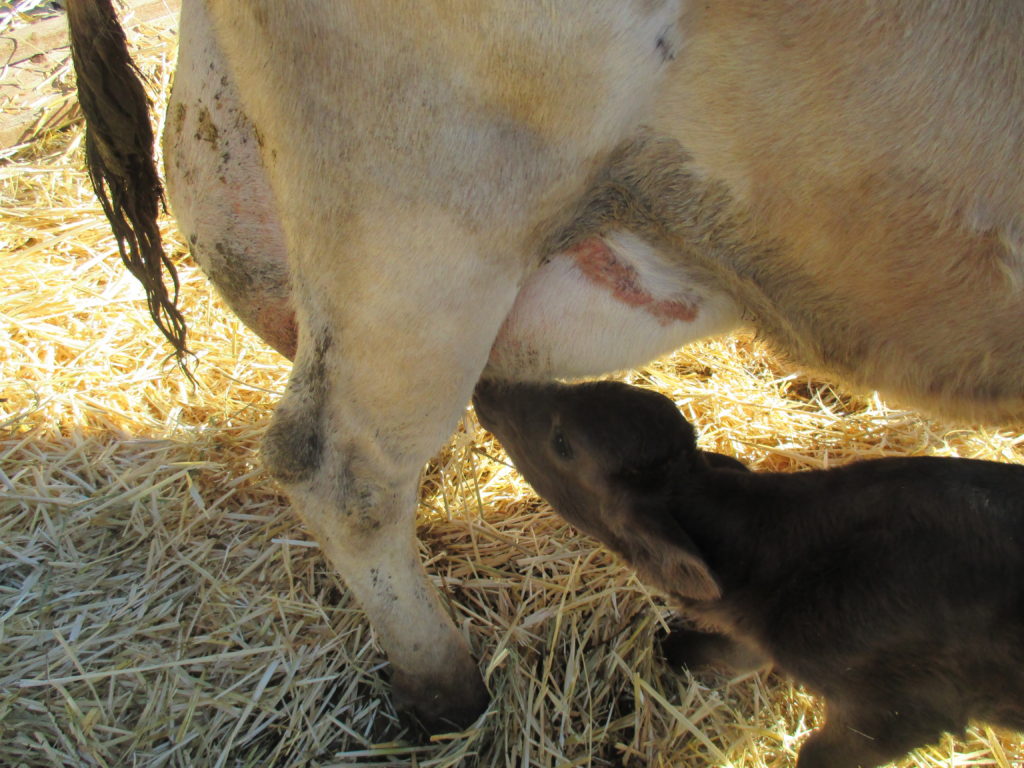 Here’s what we want; that one teat is the only one the baby can reach – look at her poor mom’s swollen udder!

This morning I had a strong feeling that I should get out there first thing, and when I did, Violet was up and nursing. She had figured out that she could reach the right front teat by standing on the other side. She filled her belly and collapsed for a nap. We’re not out of the woods yet – until Maybelle’s udder swelling decreases the calf is going to have trouble, so we’re supervising nursing several times a day and will keep that up until she can nurse on all four teats. In the meantime, the laundry has tripled, what with mud, cow manure, baby poop, milk and calf saliva…