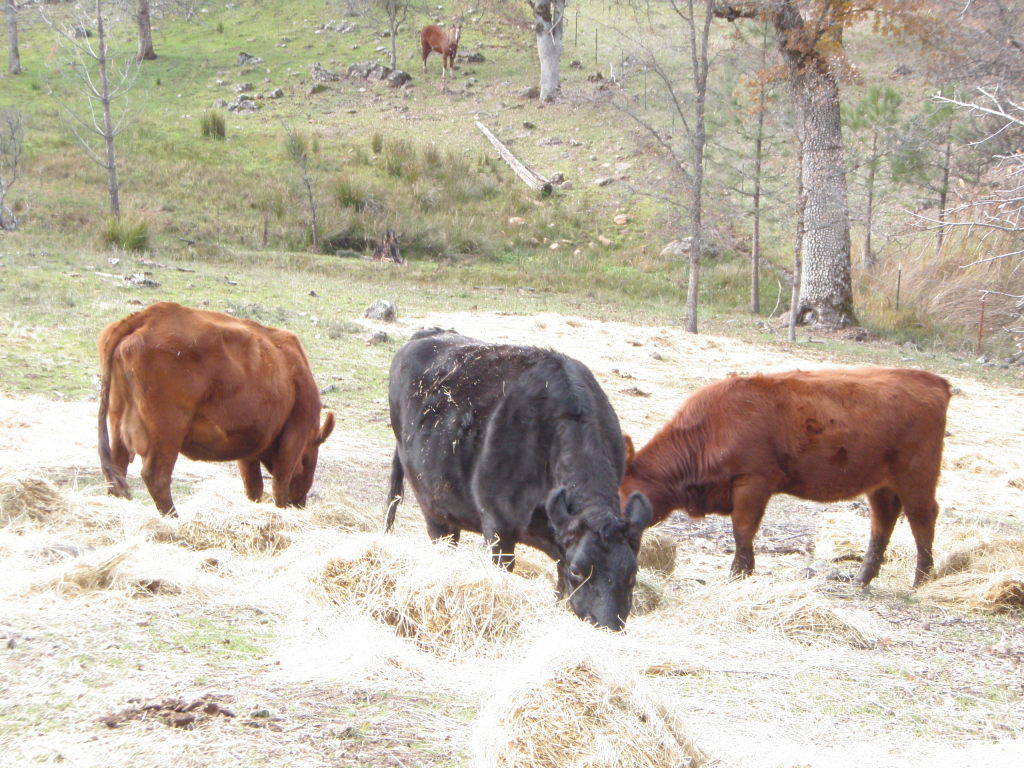 Beefsteak in my future.

Remember that joke about the gal who always cut the end off the ham? Hubby asked why she did it, and she didn’t have a good answer except that’s what her mother always did. After climbing the family tree, the aforesaid gal found out this “important” family tradition began when great-grandma’s pan was too short for a big ham, so she cut off the end to make it fit. I call this an “ain’t necessarily so” (IANS) moment – a precept or shibboleth handed down that just isn’t true (there are LOTS of those out there, by the way!). Here’s another: you don’t have to thaw meat before cooking.

Being a good little ranch wife who raises her own beef, pork, lamb and chicken (not to mention the contributions from the hunters in the family), I always have frozen meat in the freezer. Being a busy little ranch wife, I’ve been known to forget to take it out to thaw. In that case, ground meat frequently comes to the rescue because it’s so easy to cook it – just add a little fat to the pan, then a few tablespoons of water, unwrap your meat and plunk it into the pan on medium. As the meat browns, scrape off the cooked parts and turn it over. Once the frozen chunk is thin enough, you can break it up into smaller pieces. If you’re adding ingredients like onions or other diced veggies, toss them in when about half the meat is cooked; everything will finish about the same time. If you’re making something like hamburger or sausage gravy, turn the heat to low when you break up the last frozen chunks. As soon as all the pink disappears, make the gravy.

Once you start talking about roasts, chops and steaks, the picture is a bit different. Chops and steaks can easily be cooked frozen, according to Cooks Illustrated. Sear your steak or chop at high heat for 90 seconds at a time, then put them in a 275-degree oven to finish. Just add to the cooking time – it will take slightly less than twice as much time; say 18 minutes instead of 10 minutes. If you buy commercial steaks and chops, they’re usually packaged in those flat Styrofoam trays, and it’s easy to pop them out into the skillet. When you have a butcher do your meat (or do it yourself, as we used to do) the meat tends to come in a tightly wrapped package that contains several chucks of meat. It’s pretty much impossible to get those separated. However, placing two pieces of waxed paper between each steak before wrapping them to freeze keeps them from sticking together. Set individual steaks on a metal pan (like a cast iron skillet) for a few minutes, paper side down. The meat quickly starts to thaw and you can peel off the paper. Then proceed with the searing, etc.
For a roast, just unwrap and stick it in the oven as if it were defrosted. Expect it to take about twice as long to cook as it would if thawed. This technique is particularly good when you’re cooking something that tends to be a little dry, like venison or a cured meat like ham. The end product will be much juicier. I also like to add a cup or more of water to the pan, refreshing as necessary during the cooking process (if you use glass pans, make sure you’re adding hot water; cold water will break the pan!).