I’m one of those people who prefers to depend on her own resources rather than agribusiness. For example, I plant heirlooms and open-pollinated seeds, and save my own seeds whenever possible. Raising your own chickens year after year instead of buying new chicks from a hatchery comes under a similar heading but is a little more complicated. Clan mating is a technique developed to allow you to breed your own without recourse to outside sources, while preventing the downside of serious inbreeding.
Before we get into the details of the clan mating system, let’s do a quick review on breeding methods in chickens (or animals in general):
Inbreeding: breeding closely-related chickens like full sister and brother. This can be dicey, depending on the quality of the chickens you’re breeding and your willingness to cull. Although the odds of a good outcome with a full brother/sister mating are higher than the odds of a problem, over the years it tends to concentrate nasty recessive genes with each succeeding generation. Both the ancient royal Hawaiians and Egyptians practiced this method, but since they didn’t cull very carefully (especially in Egypt) they had a fair number of defective babies and ummm – let’s just call them “unusual” adults.
Crossbreeding: breeding two different breeds, like Rhode Island Reds and Leghorns. While this gives you the greatest genetic diversity and hybrid vigor, you lose the individual characteristics that make up a particular breed. This is not necessarily a bad thing, and a number of crossbreds (hybrids) have become well-known for certain characteristics, like the Cornish Cross meat birds. Another familiar crossbred is the sex-link chicken, with hens that are typically high egg producers and chicks that can be sexed at birth based on their coloring. If you breed chicks from these matings, however, they won’t breed true and what you get is purely a matter of genetic roulette.
Outcrossing: breeding unrelated chickens in the same breed. Outcrossing generally gives you the smallest risk of genetic problems. The disadvantage is that you have to constantly bring in new blood from outside sources or have enough money to have a LOT of breeding stock and the facilities to keep the various chickens in. The other disadvantage is that if you’re trying to breed for specific characteristics, you may lose some of those characteristics or at least suffer several years’ setback by bringing in new stock. It is, however, a good idea to outcross after a certain number of generations (say anywhere from eight to 10, and certainly by the time you get up to 20 generations). By then, your own stock should be fairly uniform, and bringing in outside blood will hopefully improve your chickens.
Line breeding: breeding related chickens separated by one or more generations (grandfather and granddaughter) or in the same generation but not closely related, like first cousins (who share grandparents). Line breeding allows more genetic diversity but also allows you to concentrate some of the more desirable characteristics in the offspring. This is the ideal method for improving your stock while minimizing the risk of defective genes. You should still be very careful about selecting your breeding stock and culling poor producers or chickens that exhibit undesirable characteristics.

Clan Mating Basics
Clan mating is basically a form of line breeding. In a nutshell, a clan is a flock that always stays in the same pen. The chicks always take the clan of the mother, and the female chicks remain in the same clan for life. You’ll select one rooster from each clan. The rooster is always moved one pen away IN THE SAME DIRECTION, so the rooster in the A pen always goes to B clan, the rooster in the B pen to C clan, and the rooster in the C pen to A clan. In classic three-clan mating, the roosters are moved each year, and butchered at the end of the three-year cycle. You move the rooster for two reasons: you don’t want him breeding his daughters and you don’t want full-brother/full sister matings. By moving the rooster each year, you assure that none of the chicks are that closely related. That’s also why it’s better to have more than three clans if possible. Every three years you butcher the breeding roosters and start a new rotation, for the same reason. In order to have up-and-coming roosters, you’ll need to save the best rooster from each clan each year, and they will have to be clearly identified as to the clan in which they originated. You can put these extra roosters in a pen together as long as you give them plenty of room and keep them well out of sight and sound of the hens (otherwise they’ll fight). When the time comes to butcher the breeding roosters, go out to the roosters-only pen and select the oldest representative from each clan to become the new breeding rooster. 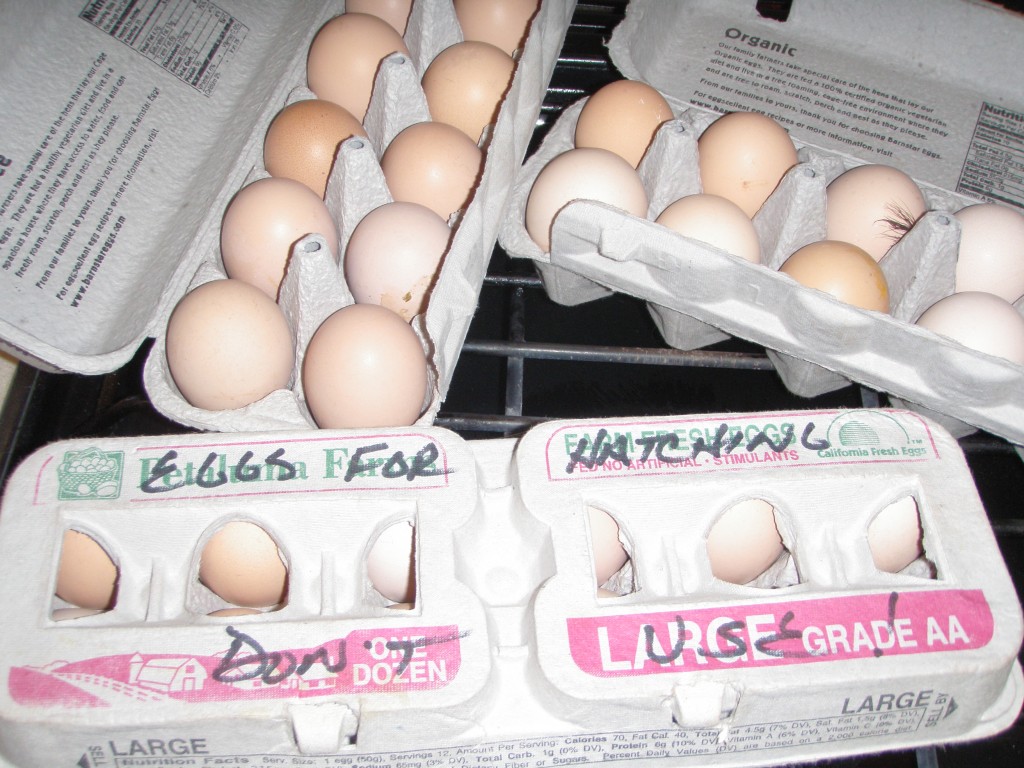 If you include setting ability as a valuable characteristic, you won’t need to incubate eggs.

Older is Better
Everything I’ve read and heard from the old-time chicken keepers says that two-year-old hens are the best producers (as far as selecting a new generation is concerned) and since they’ve also demonstrated their hardiness and disease resistance, you want to select your new pullets from these or older hens. The old-timers also say an older rooster and older hen are the best choice for mating. Failing that, they say breed an older rooster to a pullet and a cockerel to an older hen. The first rotation, all your hens and roosters will be the same age, but after that, your breeding roosters will be about three years old. By butchering your breeding roosters every third year, you will always have an older rooster in each clan, so whether he’s breeding older hens or pullets, you have the best chance of quality offspring. Commercial breeders typically butcher hens at two years, because the first 24 months is the peak period of egg production. Some chickens are the heavy-production-while-young type and others continue to produce over a longer period. In both cases, however, hens of the same breed still lay about the same number of eggs overall. The advantage of selecting an older hen’s eggs for hatching is that she’s demonstrated hardiness and disease resistance – both qualities you want in your flock. You also have plenty of time to evaluate hens and roosters for qualities such as growth rates, molt periods, tendency to set, egg quality and numbers, aggressiveness and other factors.
The Genetics Matter
Although eventually all the chickens will have similar genes, they are not closely related. The breeding hens and roosters are never full brother and sister (the mating in which you have the highest risk of defects). And even though a hen and rooster may both have some A genes, for example, the genes come from both the original rooster and the different hens, which decreases the risk of a too-close mating. By always keeping the hens and their female descendants in the same pen, the clan will continue to retain its original characteristics. Obviously, adding a fourth or fifth clan to the rotation will increase genetic diversity and decrease inbreeding, but this three-clan system will work for at least 20 generations. A five-clan system is supposed to be good for 100 generations. Your grandchildren might need to worry about finding new blood, though.

In the next post, I’ll give you a chart that will walk you through the steps of a three-clan rotation.