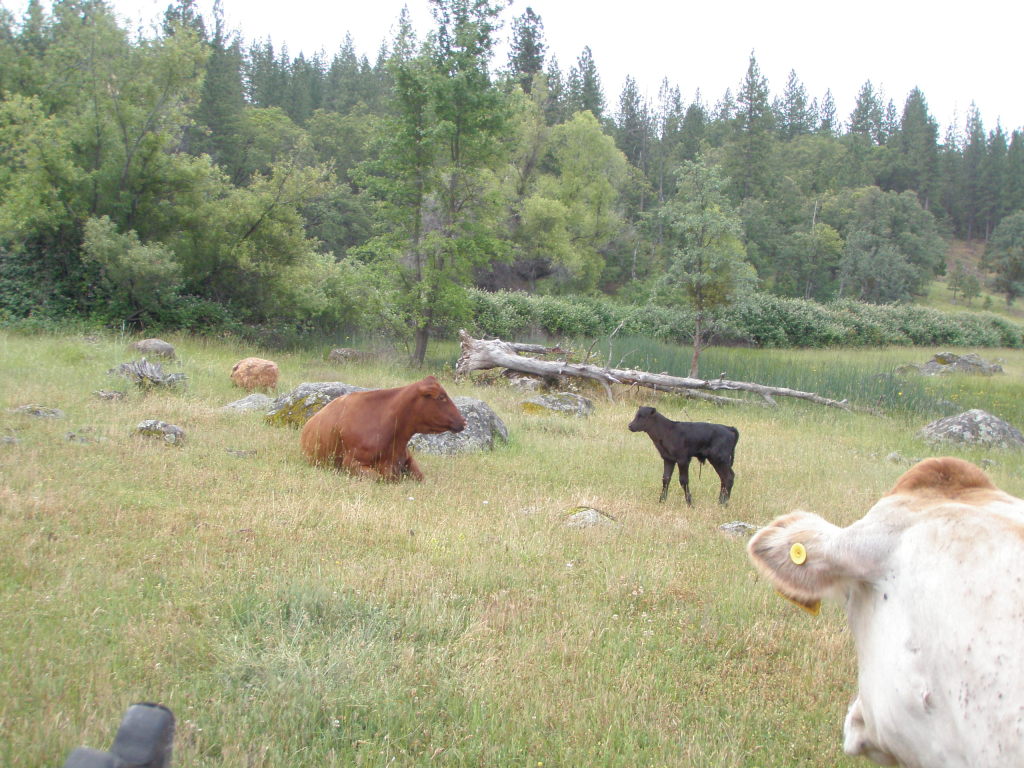 This is how cows should be raised; on green grass.

In this modern-day-take-it-out-of-the-freezer-and shove-it-in-the-microwave world, we often lose sight of what real food tastes like. Not too surprising, when you look at the ingredient lists on most prepared foods. Many so-called foods have more chemicals than food ingredients. I figure if you can’t even pronounce half the ingredients, you shouldn’t rely on it as a major food source. On the other hand, just think about beef stew or chili simmering slowly through the day, ready to warm the cockles of your heart – not to mention your cold hands – come dinner time. Or home-made breakfast burritos or Cornish pasties, stored in the freezer for those mornings when you can barely find the kitchen, let alone think up a menu.
Meatloaf is one of those quintessential comfort foods. It conjures up visions of gingham aprons, milk with the cream still on and new-laid eggs. It’s an ancient recipe, included in the classic Roman cookbook Apicius. Mind you, that author recommended using cooked brains in the concoction, which – just guessing – most people these days would not want to include. In other respects the recipe is very similar to modern versions: eggs, herbs and broth to moisten. Meatloaf is found in nearly every country and culture. Some recipes include various chopped or ground vegetables, while many include hard cooked peeled eggs tucked into the middle of the loaf. Meatloaf may also include ham, cheese, sausage, breadcrumbs or rice, depending on the origin of the recipe. It is served hot or cold and nearly always with some sort of sauce or gravy. Mashed potatoes are the classic accompaniment in many cultures.
Since meatloaf is such a simple recipe, the quality of the ingredients really matters. Grass-fed ground beef and home-raised pork are the best choices. If you use venison, it may need some added fat (tallow or lard are the best choices) as venison is typically lean. Fresh ranch eggs also make a difference. Making good meatloaf is rather like making good bread – the mixing makes a difference. I’m firmly of the opinion that in both cases, you need to mix with your hands to get the best sense of the proper texture. It’s also more effective to use your hands on meatloaf to distribute the ingredients properly without over-mixing the meat, which makes it tough. Here’s a good recipe for meatloaf, adapted from a variety of recipes including the version in Cook’s Illustrated.

2 pounds of meat – all beef or venison or a mixture of one or both of these with an equal amount of ground pork (I suppose you could use sausage, too, although I’ve never tried it, and some recipes use veal)
2 large eggs
¾ to 1 cup of old-fashioned rolled oats
½ to ¾ cup of tomato ketchup
1 small yellow onion or 1 medium red onion, very finely diced
A good sprinkling of garlic powder
Salt and pepper to taste

Crack the eggs into a large bowl and sprinkle with garlic powder. salt and pepper. Mix in the diced onion. Cook’s Illustrated recommends you saute the yellow onion first for about five minutes. I’ve found that if it’s finely diced or you use red onion, sauteing is an unnecessary step. Add the smaller amount of ketchup and stir. Now begin mixing the meat into the egg/ketchup mixture. When it’s about half mixed, sprinkle in the smaller amount of rolled oats. Continue to mix gently. If it seems dry, add more ketchup; if too wet, add more rolled oats. Pack into a 9X5 loaf pan and bake at 350 degrees for about one hour. Don’t overcook – you want it pink in the middle, which means an internal temperature of about 130 degrees. It should stand for about 10 minutes after you take it out of the oven to redistribute the juices. I also double the recipe and bake in a 9X13 pan. Expect it to take about 10 minutes less to cook. This is good for a crowd or for making ahead – cut into single servings and freeze on a flat pan, then pack into zip lock bags and take out as many servings as you need for a meal. Reheat in the oven or microwave after defrosting. If you want to fancy it up, saute a chopped medium onion and two cups of mushrooms in a couple of tablespoons of bacon fat, lard or coconut oil. Use as is or turn out of the pan, add a couple more tablespoons of fat and make a simple cream gravy. Dollop some mushroom mixture and gravy over the top of each slice.