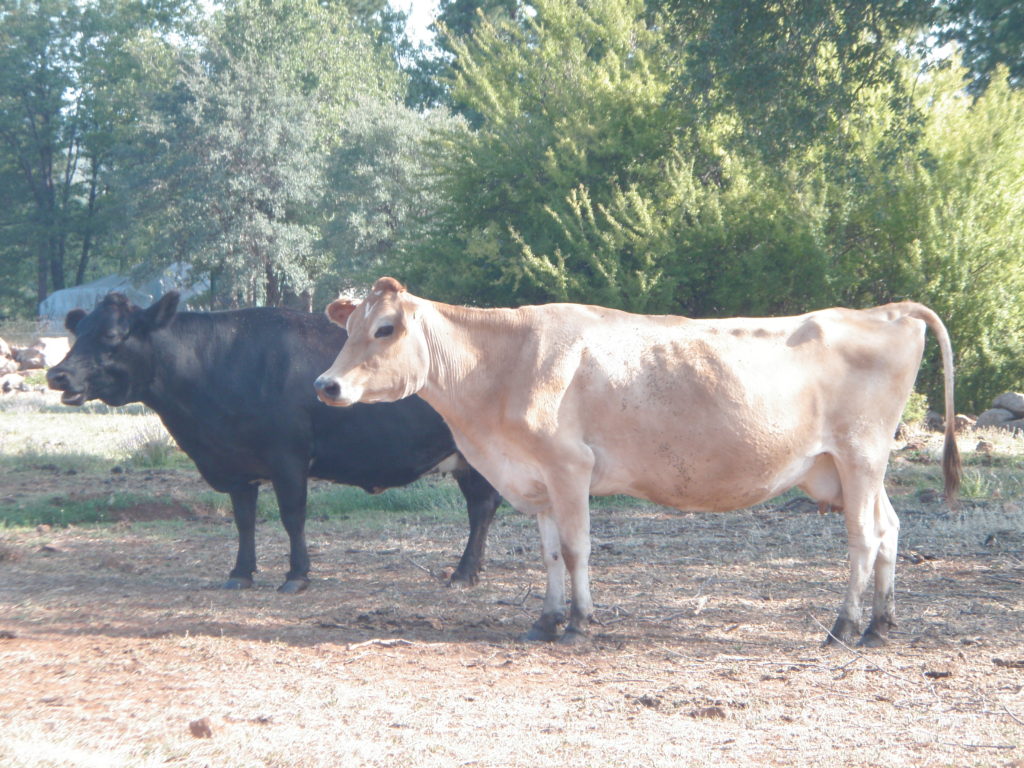 Cows can only be milked for about nine to 10 months on one lactation, then they must be dried up.
An extended lactation is possible for some cows. I milked almost two full years when Maybelle lost a calf and the breeding schedule wouldn’t work out. I feel strongly that I want my cows to produce calves in spring when there’s plenty of good green grass and the weather is warm. It’s also when the deer are dropping their fawns. Cougars are a problem around here, so I’d rather they hunt fawns than my calves. Rather than breed my milk cow and have a calf in the February, which is the norm for beef cows up here in far northern California, I decided I’d rather wait until I could get her back on her usual schedule. She did fine. By the end of the lactation she was only producing about a gallon a day. That was enough for me and no strain on her.

Now, there’s a caveat here. In the case of the milk cow – especially a pure-bred milk cow – they are much more fragile from a health standpoint because it isn’t natural for a cow to continue to produce high amounts of milk for 10 months of the year. Dairy cows are harder to manage than beef cows and an extended milking can be stressful for the cow. Breeding efforts for dairy cows have typically focused on production to the point that a milk cow requires much better nutrition and management than a beef cow to prevent serious health issues. In my case, I only had the one milk cow to manage, so I could keep a really close eye on her health and nutrition-wise. If she had shown any signs of health issues, I would have dried her up immediately.

There are some dairies that are interested only in the milk and have moral qualms about butchering excess calves for veal, so they have stretched the lactation period to as much as four years on a single freshening. They say their cows do just fine on this schedule, although occasionally a cow will have trouble breeding back after such a long lactation.
One disadvantage to this method is that you have to deal with milking a cow in heat every three weeks or so – it can be downright dangerous and at the least is a nuisance. I probably wouldn’t try this with a cow that goes completely nutso when she’s in heat, especially now that I don’t move as fast as I did 20 years ago. But cows are individual, just like people. Some are reasonably mellow even when they’re in heat.