I spent a good chunk of the day harvesting and cooking beans for the freezer. Beans are a multipurpose vegetable – perhaps the most multipurpose of all. Green beans, purple beans, yellow beans, streaked beans, snap beans, shell beans, wax beans, filet beans, French-cut beans, dried beans, flat beans, round beans, bush beans, pole beans, half runner beans – all have their place in the kitchen. And cooking beans is easy. The key is the use the right method for the bean’s stage of development. 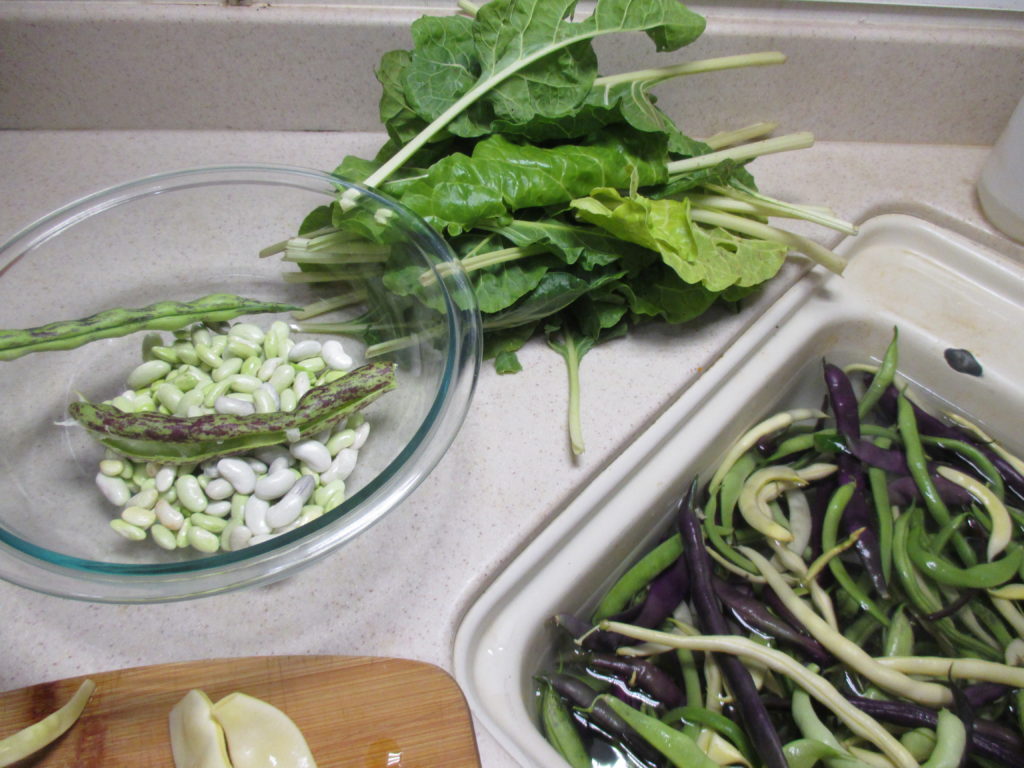 Makings for minestrone soup – snap beans, shelled beans and chard, among other ingredients.

Let’s start with the summer-time classic – snap beans. Wax beans are just snap beans that are yellow – treat them the same way when cooking. Filet beans are the French version, smaller and more slender than ours. Favorite green varieties around here are Black Valentine, Rattlesnake and Blue Lake, all of which I’ve been growing for years. I’m also adding two new favorites, one of which is Monte Gusto, a wax pole variety. The second is Blauhilde, a German pole bean that is dark purple and very prolific. Snap beans are best when cooked crisp-tender in boiling water. Use the smallest amount of water possible, as you’re steaming rather than actually boiling. Cook three to four minutes and immediately lavish with butter, then add salt and eat. They also saute and stir-fry well. 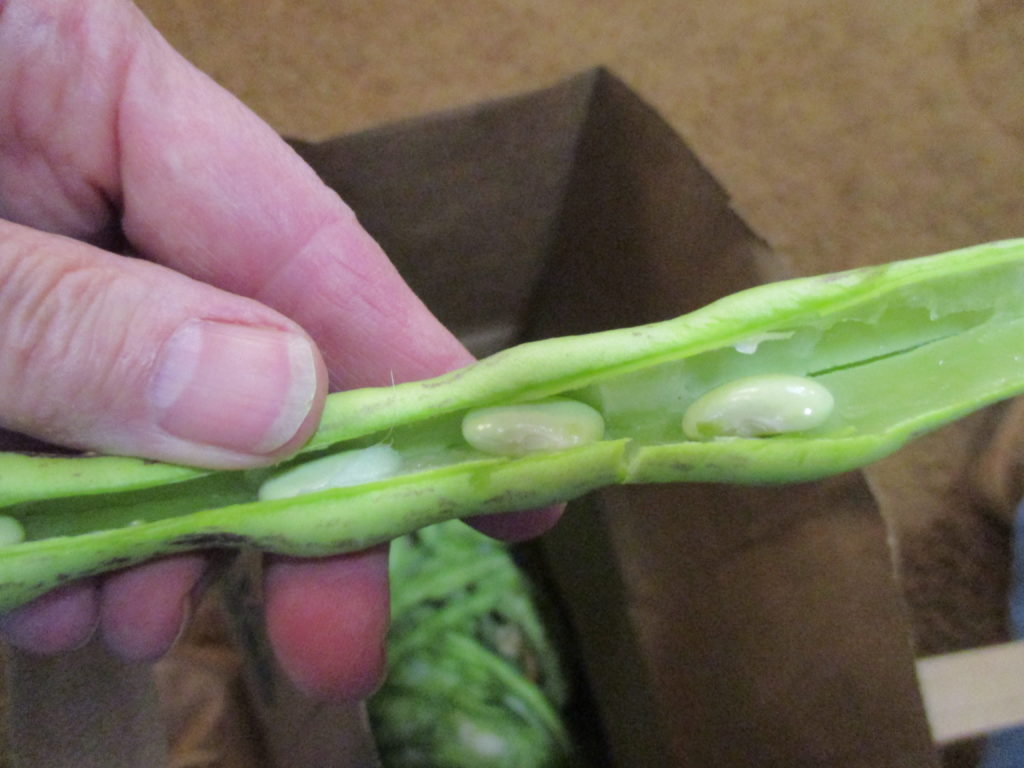 Shell beans in the pod.

Once the snap beans get larger, or if you’re growing some of the really old-fashioned varieties with strings, like Macaslan, Old Homestead or Rattlesnake (you don’t have to string the smaller beans of Rattlesnake just the older ones). make southern green beans. These are best sliced on the diagonal in two- or three-inch lengths and cooked with chopped salt pork or bacon. Cook the bacon until slightly crisp, remove from the pot, pour in some water and/or chicken broth and add beans. Cook at the lowest possible setting for at least one hour, then stir in bacon and serve.
Lima and cannellini beans are the classic shell beans, but you can also shell snap beans that have gotten away from you. Remove the pods while bringing a pot of salted water to a boil. Dump in the shelled beans and simmer for 20 to 30 minutes. Drain. Eat hot with butter or make a quick vinaigrette while the beans are cooking. Mix in the dressing and allow to cool to room temperature. You can also add chopped fresh tomatoes, blanched corn kernels, diced celery or other embellishments. 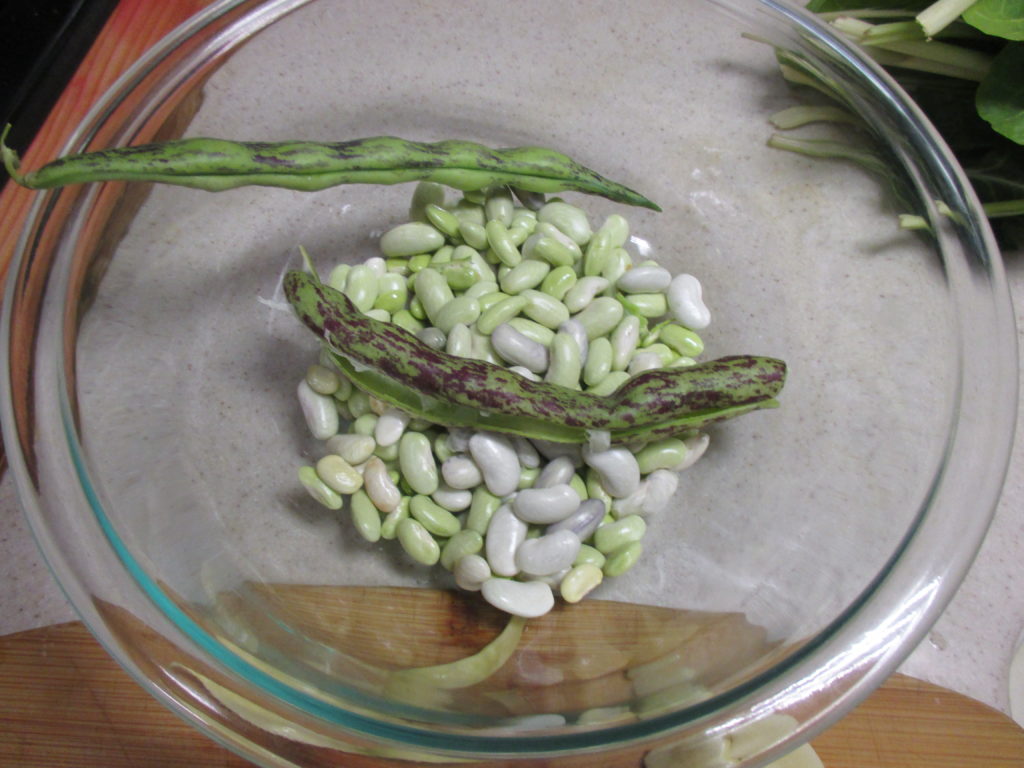 All beans can be cooked as dried beans. Whether it’s the black Mexican Turtle, creamy Mama’s Cannelllini (the only pole cannellini I know of), red kidney beans or speckled beans like Borlotto, cranberry or Pinto, the recipes for cooked dried beans are legion. They are best when soaked 12 hours in enough water to cover them by at least two inches. Drain the beans. Put on the stove, add enough water to cover by at least two inches, cover the pot and slowly bring to a simmer. Cook until they can be easily mashed against the side of the pot with a fork – eight to 10 hours in most cases. Don’t add salt until you’re at least halfway through the cooking process; early salting makes the skins tough. Hold off on the herbs and aromatics like onions until the last two or three hours, as you’ll have better flavor. 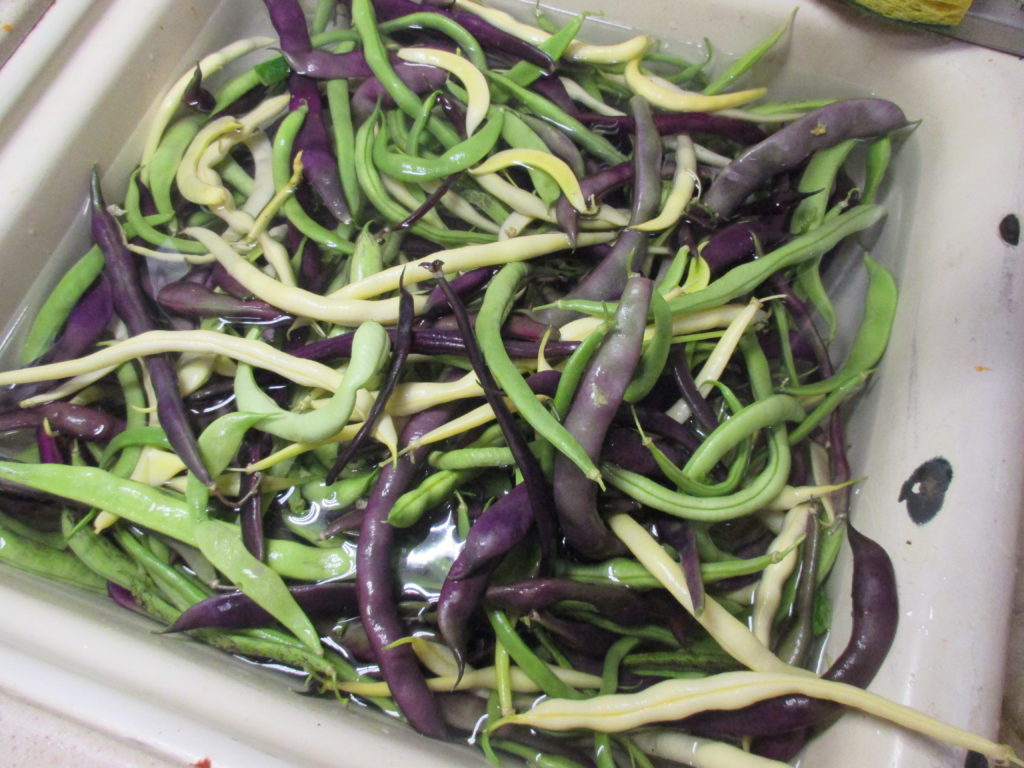 I sort these according to size as I prepare them for blanching.

Once you have your various beans cooked, you can combine them in:

1. Heat vinegar, sugar, oil, garlic, salt, and pepper to taste in small nonreactive saucepan over medium heat, stirring occasionally, until sugar dissolves, about 5 minutes. Transfer to a large nonreactive bowl and cool to room temperature.
2. Bring 3 quarts water to boil in large saucepan over high heat. Add 1 tablespoon salt and green and yellow beans; cook until crisp-tender, about 5 minutes. Meanwhile, fill medium bowl with ice water. When beans are done, drain and immediately plunge into ice water to stop cooking process; let sit until chilled, about 2 minutes. Drain well.
3. Add green and yellow beans, kidney beans, onion, and parsley to vinegar mixture; toss well to coat. Cover and refrigerate overnight to let flavors meld. Let stand at room temperature 30 minutes before serving. (Salad can be covered and refrigerated up to 4 days.)
And don’t forget this classic rhyme, which you can chant while you’re cooking beans: Beans, beans, the musical fruit; the more you eat, the more you toot; the more you toot, the better you feel – so let’s have beans for every meal!