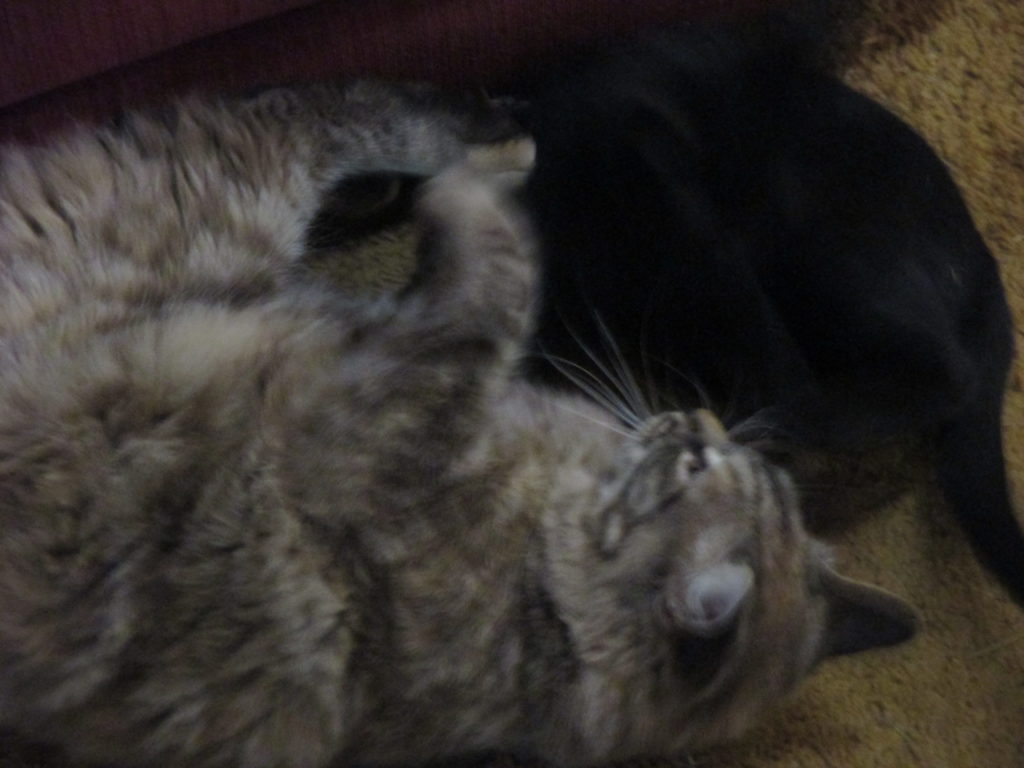 CeeCee and Radar in a wrestling match – from the growls and hisses, you’d think they were trying to kill each other, but it’s all in fun.

A couple of years ago I did a post about the youngest member of the feline family around here. A lot can change in two years. When I wrote the first post, we had four cats – BlackCat, Spike, CeeCee and Radar the BatCat. The first two were in their late teens and both died early this year. CeeCee was killed by the neighbor’s dog. The neighbors gave him away and later took him back. The dog literally tore a hole in the wall of the house trying to kill a new kitten, and growled and lunged at the woman in the couple when she came in the house carrying her new baby boy. We had warned them when we found out she was pregnant that the dog was likely to be a risk for the baby based on his past aggressive behavior. The wife – a softhearted and very nice lady – downplayed the risk. Luckily, when the dog growled at her and the baby, her husband woke up to the danger and insisted he had to go. Mind you, they didn’t put him down, which was probably the best solution, but gave him to her mother, who lives in an isolated area without kids or other pets. 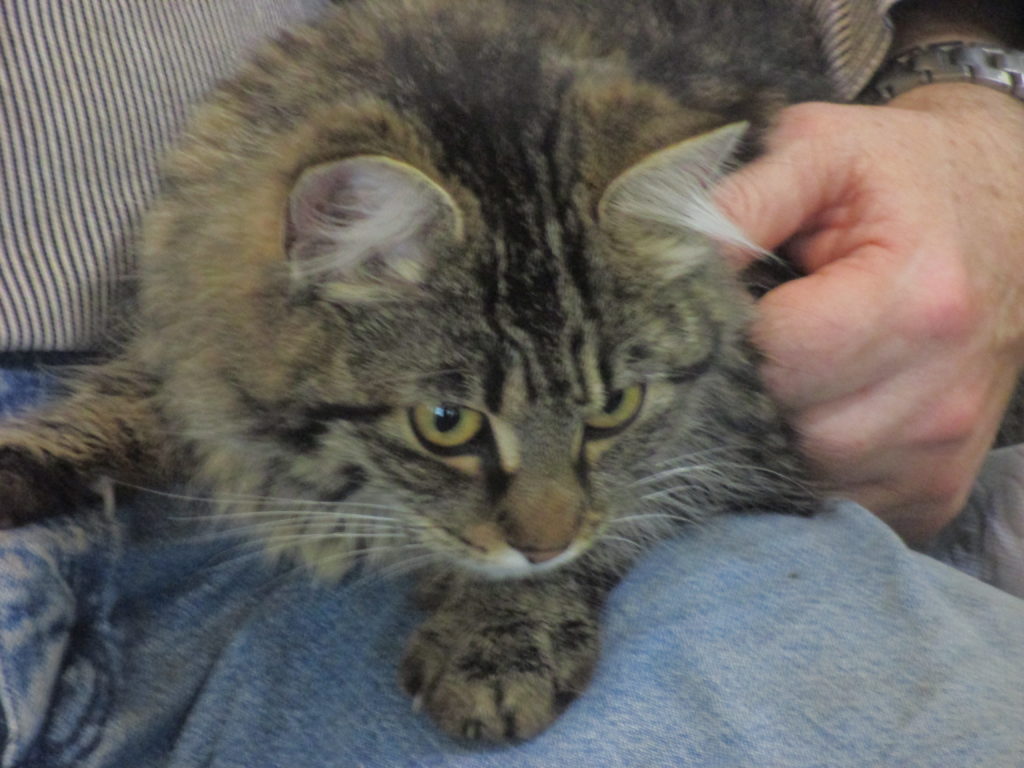 Anyway, to get back to the cats, three days after we lost BlackCat, a half-starved feral female cat showed up. She had apparently been socialized to humans, however, because once my husband fed her, she attached herself to him. Unusual in a cat, her eyes are nearly round, and when startled, she looks as though someone had jumped out and frightened her. We named her Boo. She and Radar became companionable, but not best buddies the way Radar was with CeeCee.
Late this spring, hubby came home with the news that the woman from whom we had gotten Radar had another litter that included Radar’s half brother, an orange and white tiger. At the time he mentioned it, Radar and Boo were going through the house like a pair of furry hurricanes. I looked at them, looked at him and asked, “Do we REALLY want another cat?” What hubby heard was “REALLY want another cat.” 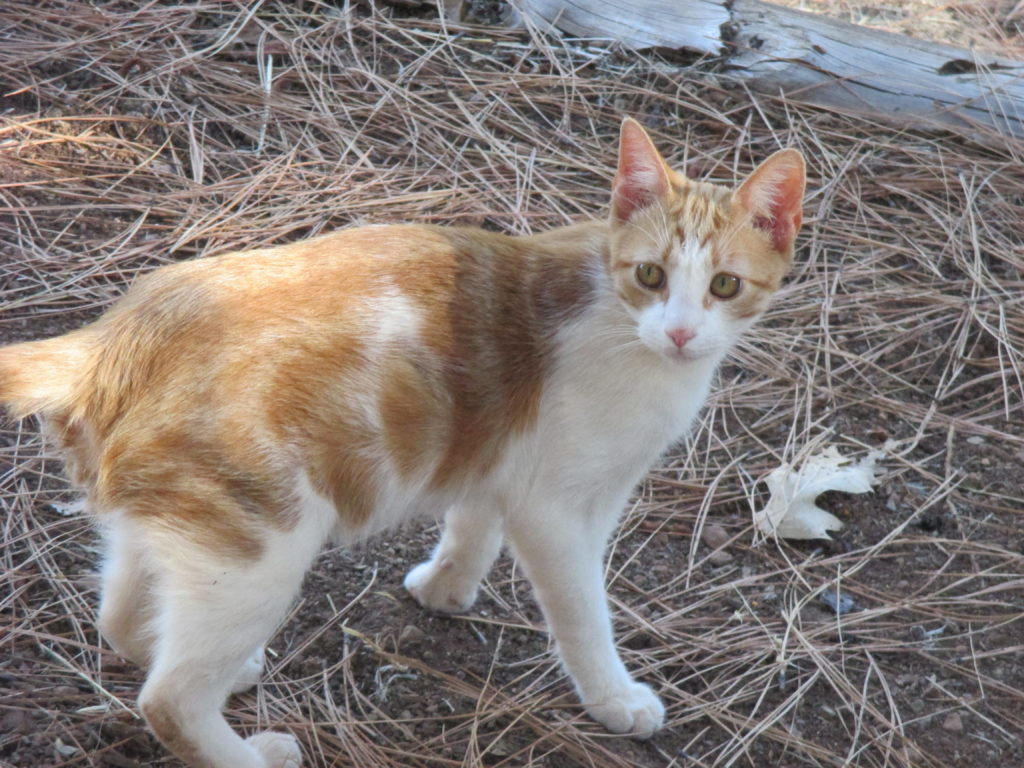 Max holding still for once – it took 20 minutes to get a picture that wasn’t just an orange blur.

Enter Max. (I almost called him Klinger, but figured Max was close enough – and it went with Radar.) Like Radar, he immediately attached himself to me. His mother had weaned him early, so he didn’t have an extra ounce of flesh and was constantly hungry. We figured he might have been five or six weeks instead of the eight his owner claimed for him. Even now, when he’s probably about five months old, he is still much smaller than the BatCat was at the same age. Originally, we thought Max was a Manx, but after additional research, we think it’s more likely he hails from the Japanese bobtail on his mother’s side. 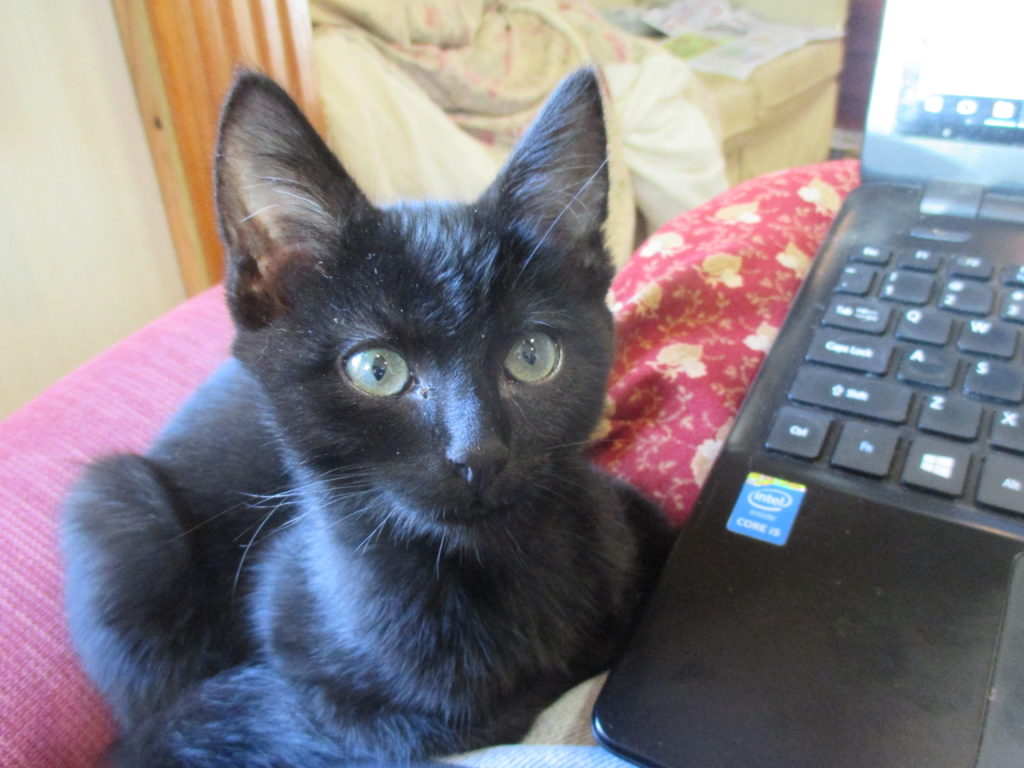 In other respects, the two are obviously related. Both prefer to lie on my left wrist, interfering with my typing. Since Radar now weighs about 10 pounds, that’s a fair amount of interference. Both have a habit of reaching up to pat my face, gently and with claws sheathed. Both started out sleeping on my chest at night; they still sleep with me but usually on my legs or in my lap, depending on my position. Both tend to wake up early (as in 0330 or 0400 early) and immediately come to tell me “It’s morning!” 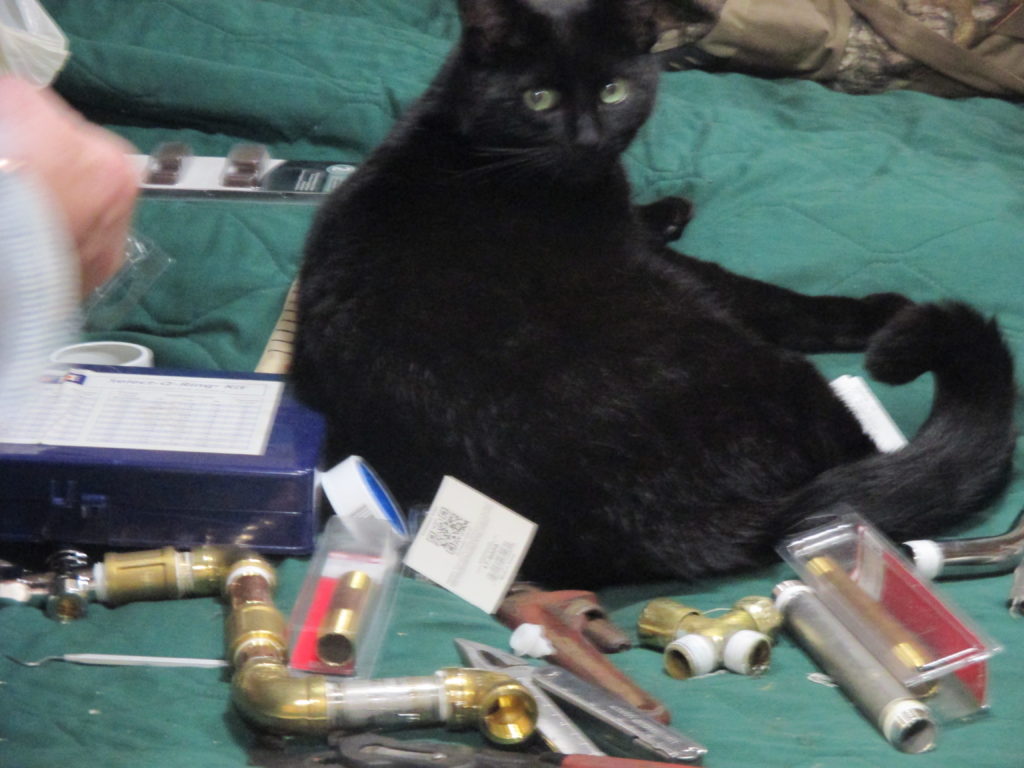 Radar finally has a playmate who can match him in terms of rowdiness if not size. Not to mention that Radar is learning what the older cats went though when he joined the family – there are days when he wears a distinctly hunted look. Like many naturally short-tailed cats, both have some dog-like attributes: highly social with humans, will follow commands (most of the time – they both understand the word “no” quite well, even if they sometimes prefer to ignore it) and talkative. They usually come when called. Boo, on the other hand, is a typical independent I’ll-come-if-I-feel-like-it feline personality. She’s the one who will refuse to come inside at night and the “no” word is just so much human babble from her perspective.
Given our respective ages, I expect these three will be our last cats, but we’ll see. I long ago learned that I’m not all that good at predicting the future of the feline variety… 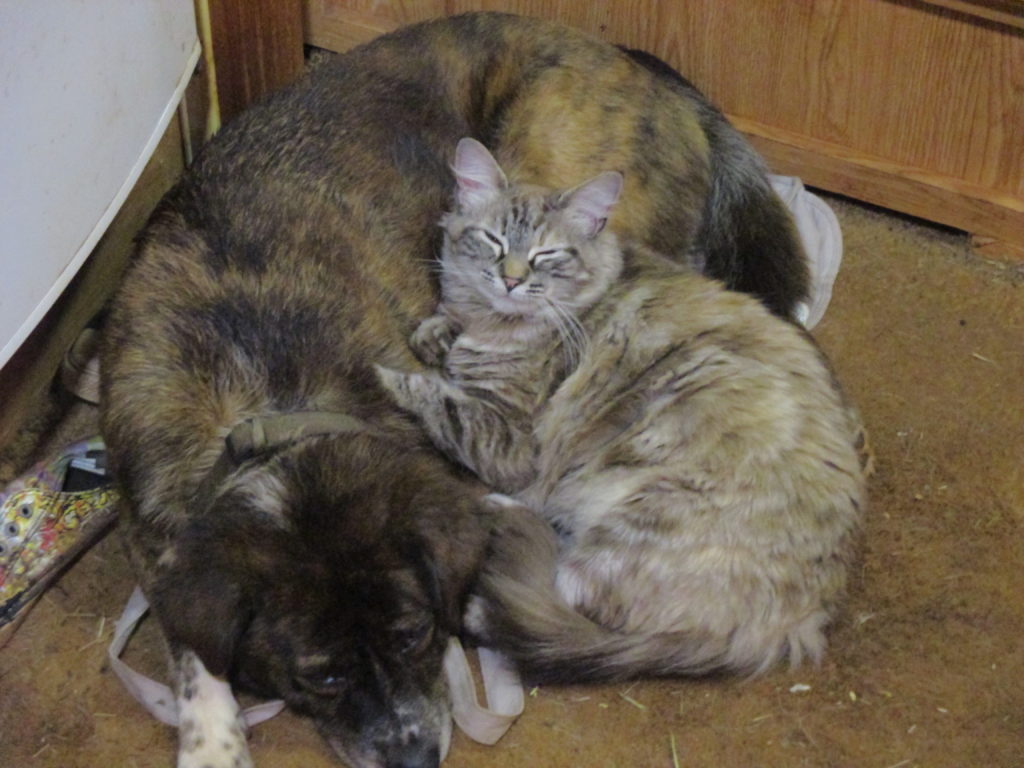 Patient Rosie the dog – everybody uses her for a pillow.