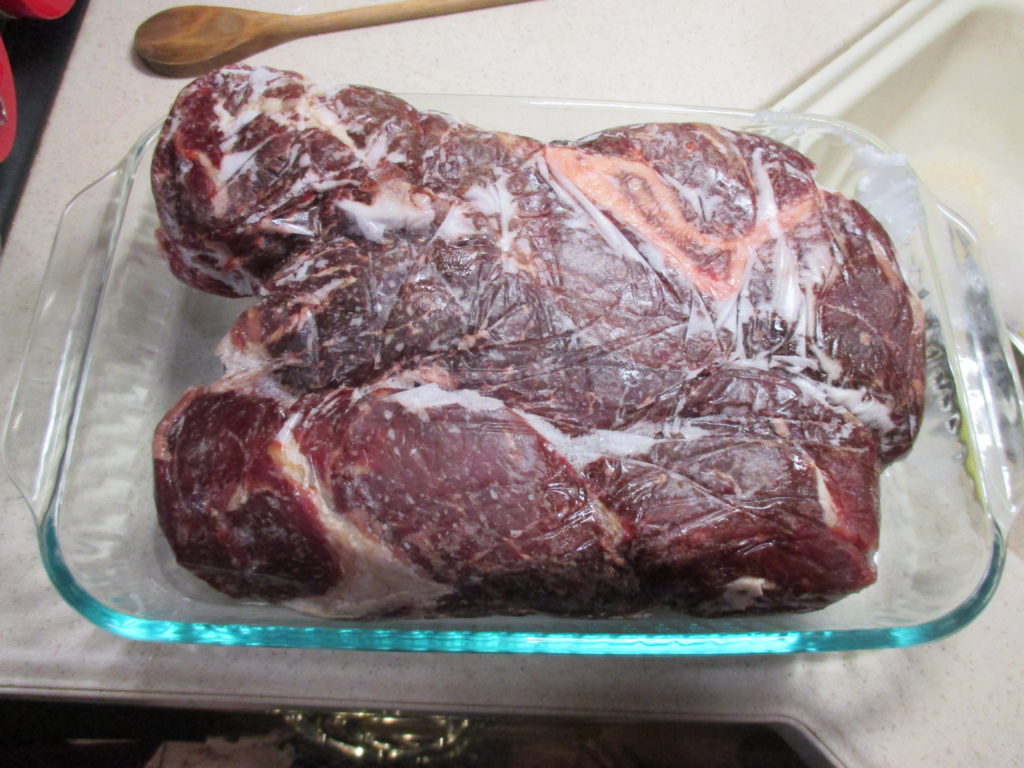 All that fat and connective tissue gives chuck roast great flavor and texture.

This post didn’t go up yesterday (and has no current pictures since the camera is on strike) because we were getting ready for our first storm of the winter. Not satisfied with a bit of precipitation, Ma Nature has apparently decided to kick things off with the white stuff plus high winds, all due on Tuesday. I was a little limited in my efforts due to having stepped wrong a few days ago and buggering up my bad knee. However, I did give encouragement (OK, and maybe a little nagging to the younger generation) as Papa and the girls got things ready. And I made beef stew for dinner.

Aside from bread and maybe soup, stew is easily the most ubiquitous food on the planet. Good ol’ Wikipedia lists 110 different stews from all over the world. Many of these have variations as well. Like French toast, stew has gone well past the old-fashioned category into flat-out ancient. Both are mentioned in Apicius – a Roman cookbook circa 3rd or 4th century AD. But stew goes even further back. Herodotus reports the Scythians would kill an animal, cut up the meat, put it in the animal’s paunch (stomach) dump in some water and boil dinner over a fire made from the animal’s bones. Now that is what I call efficient – and no dishes!

If you want to make really good stew, bypass what is known in grocery circles as stew meat. These packages come from the trimmings of the beef and contain a wide variety of cuts. Some may be tender and some whang-leather tough. Worse, they are different sizes, which means they don’t cook evenly. Beef chuck roast is a much better choice. Second, use real beef stock, not water or bouillon cubes. The original of this recipe includes wine and a bay leaf. Nobody in my family likes the flavor of bay leaf and I don’t think the wine adds anything. Whenever I cook meat, I save the drippings, or fond, in the refrigerator. This goes into the stew pot for extra depth and flavor. You can also decrease or even eliminate the herbs and spices if you want to. Small whole or large quartered button mushrooms are a good addition. If you’re out of tomato paste, use an equivalent amount of ketchup.

Combine the first six ingredients in a small bowl. Heat the fat in a large Dutch oven over medium-high heat. Add about half of the meat to the pan, or as much as you can without overcrowding the pan. Sprinkle 2 teaspoons of the spice mixture over the meat and sauté the beef until nicely browned. Use a slotted spoon to transfer the beef to a dish and set aside. Repeat with the remaining beef, adding additional fat if needed, and seasoning with 2 more teaspoons of the spice mixture. Reserve remaining spice mixture for later.

Add additional fat to pan if needed and add onion, celery, and garlic. Cook, stirring occasionally, until softened. Add the tomato paste and stir until well combined. Pour in the beef broth (plus bay leaf and the wine if you’re using it), Worcestershire sauce and remaining spice mix. Put the beef and all the juices that have accumulated back to the pot and bring to a boil. Reduce heat to low, cover and simmer for 1-1/2 hours, or until the beef is fork tender.

Add the potatoes and carrots and raise the heat under the pot to bring the liquid to a boil. Reduce the heat to low, cover and simmer for another 30 to 40 minutes until the veggies are fork tender. Stir in the frozen peas and parsley. Combine the water and cornstarch in a measuring cup or small bowl and stir it into the beef stew. Continue cooking, uncovered, until thickened.