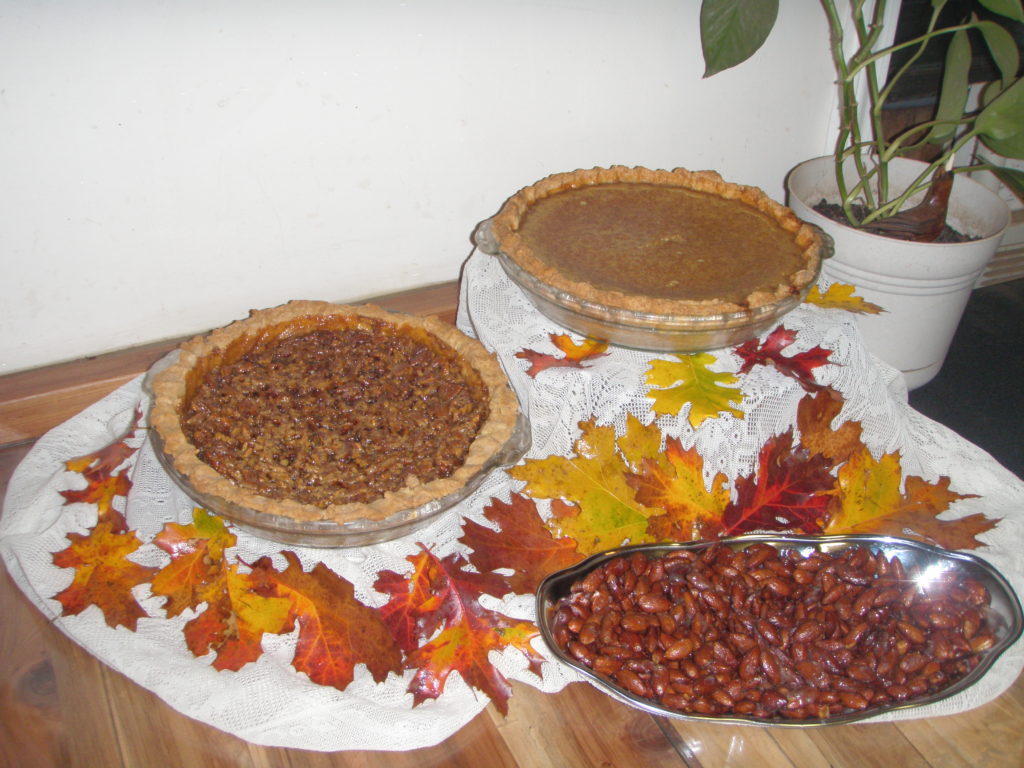 Anyone who knows me knows that I am not much for the pursuit of perfection. “Good enough” is closer to my style. When it came to pie crust, however, good enough all too often devolved into cuss words not fit for a family blog.
My stepmother is a champion pie baker. Born in 1927, she is pretty much of the cooking by eye school. My mother-in-law was of the same stripe. When you’re trying to learn to make pie crust, cooks like that are not much help. My own mother, who was an excellent cook, was not what I would call a premier pie crust maker. After many years of not exactly failures but results that were – ah, let’s just say not what I was striving for – I decided that pie crust just wasn’t my thing. I consoled myself with the knowledge that I made excellent cakes.
The thing about pie dough is that you are combining ingredients that play well together only in certain circumstances. The three major ingredients – flour, fat and water – must be mixed in Goldilocks fashion with lots of factors just right. The fat must be properly coated with flour. Rather than clumps of fat, you actually need a paste of flour and fat. Too much water makes pie crust tough because it activates the gluten. Like biscuits, pies need a light touch. Finally, practice makes better pies. Since I only made about four pies a year, I obviously didn’t get much practice.
Then I ran across the Cook’s Illustrated folks. They had taken pity on cooks like me and come up with what they called foolproof pie dough. Turns out the real key to perfect piecrust for occasional bakers like me can be summed up in two words: booze and temperature. Vodka is about 60% water and 40% ethanol. Replacing half the water in a pie crust recipe with vodka changes the amount of total water (not liquid, just water). That means a moist dough but less gluten activation. Keeping everything cold makes the flour and fat mix better and increases flakiness.

The recipe below is the basic one from Cook’s Illustrated; the keep-it-cold techniques are mine.
Perfect Pie Dough
2 ½ cups flour
1 tsp salt
2 Tbs sugar
12 Tbs cold unsalted butter, cut in ¼ inch slices
½ cup cold lard, cut into 4 pieces
¼ cup cold vodka
¼ cup ice water (meaning put lots of ice cubes in your water and let it sit at least 10 minutes)
All of your ingredients should be as cold as possible. I normally keep my flour in the refrigerator. If I’m making pie in the summer or any time the weather is hot, I mix 1 ½ cups flour, the salt and sugar and put them in the freezer overnight. I freeze the additional 1 cup or flour in a zip-lock bag. I pour the vodka into a cup or glass and put it in the freezer the night before. I measure the lard and put it on a plate in four roughly equal dollops; the plate also goes in the freezer. Leave ingredients in the freezer until literally just before you’re ready to add them.
To make the dough, process the flour/salt/sugar mix until combined (two or three pulses). Cut the butter as quickly as possible so it stays cold. Add butter and shortening to the flour, process until it looks like cottage cheese. Scrape bowl and redistribute dough evenly. Add remaining flour, process until evenly distributed (4-6 quick pulses). Empty into medium bowl, sprinkle with vodka and water. Mix with rubber spatula until dough is lightly tacky and sticks together. Divide evenly, flatten into two 4 inch disks, wrap in plastic wrap and refrigerate at least 45 minutes or up to 2 days. The dough can also be frozen for at least 6 months.
To use the dough:
If frozen, thaw in the refrigerator overnight. Otherwise, take it out of the refrigerator and gently roll out into a 12- to 13-inch circle between two pieces of wax paper. You should not need to add any flour, but if you do, make it the merest dusting. Try to roll it about 1/8-inch thick and as evenly as possible. Better too thick than uneven. Remove one piece of wax paper and place the pie pan on top of the dough. Gently lift and flip the dough. Remove the wax paper. If you’re making a two-crust pie, now’s the time to add the filling, roll the edges under and crimp or flute.
The sides of a one-crust pie tend to collapse in the hot oven. You can solve that problem by making the edge thicker and taller. A braided edge works and is fancy, but this method is faster and attractive as well. Don’t trim the crust edges. Roll out the equivalent of ½ of the above pie crust recipe and cut it into curved strips about two or three inches long. Dampen the edge of the pie crust and lay the strips on top. Meld them together with the untrimmed crust by squeezing between fingers and thumb; crimp the edges. Now your pie crust sticks up about an inch above the pan. When it shrinks, it will be just a little bit higher than the pie edge. Put the pie crust back in the refrigerator for at least an hour or in the freezer for 20 minutes (no more!)
To bake blind, line the crust with heavy duty foil and dump in dry beans, pie weights or pennies (my preference). Bake at 375° until the crust is firm and just starting to color – about 25 minutes; add filling and continue according to the recipe. To fully bake the pie shell, remove the foil and weights at the 25-minute mark. Prick the crust all over and bake until it’s golden brown.