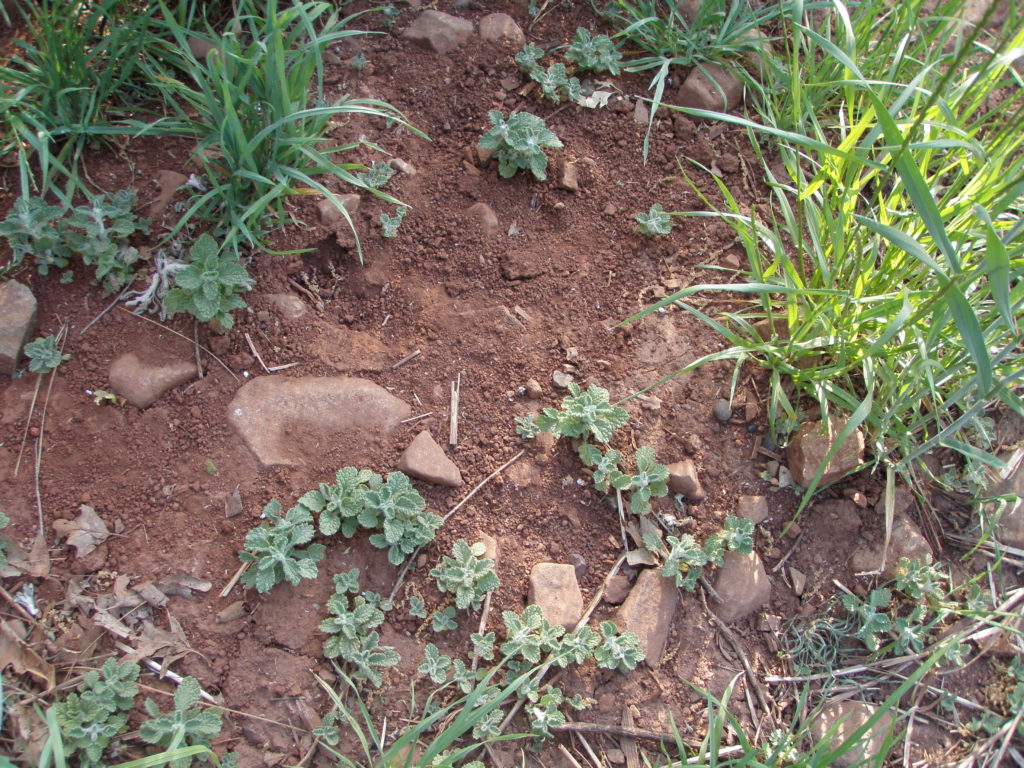 Small horehound seedlings are easily grubbed out, unlike the mature plants.

If you’re a gardener, rancher or farmer, you are in the business of weed control. I can’t remember who said it, but there’s a quote out there, something along the lines of “If a weed has managed to escape me until them, I let it grow and enjoy it.” Oy, vey! A strategy like that can be the death knell of a garden, especially if you’re dealing with something that reseeds itself, or with perennial weeds. Since most weeds fit in one or the other category, weed control should be at the top of your gardening list.
One of the ways you can tell weeds from domesticated plants is that they typically produce LOTS more seeds. We’re talking on the order of a thousand to one, here. Not to mention, the seed pods readily release said seeds practically the instant they’re ripe. If there is one single rule in weed control, it is don’t let them go to seed! Even if you can’t control them in some other way, at least cut the plants back to prevent them setting seeds. The second rule is don’t let perennial weeds get a foothold. To that end, here are the basic strategies:
Know Your Weeds
If you know what weed you’re dealing with, you’ll know what kind of growing conditions it likes, how it spreads and whether there are certain methods that make control easier. For example, weeds, like vegetables and flowers, tend to prefer a particular kind of soil. They have differing water requirements. Star thistle and horehound don’t grow well in wet areas – if you can water them heavily, they’ll die out. Sedge, on the other hand, likes wet feet. Drain it and it dies. Crabgrass prefers low-calcium soil – add calcium, it’s easier to manage. Get a good weed book and carry it to the garden with you. Look for one that shows the plant in all stages of growth, from seedling to seedheads.
Don’t Till
Many weed seeds are viable for decades. If you till or plow, you will turn up seeds that germinate because of the increased light. Perennial weeds are often spread by tilling, because the little chopped up bits of roots each become a new plant – bindweed and Bermuda grass are a classic examples.
Practice Vigilance
You can’t turn your back on a weed. You need to be out there looking for them Every. Single. Day. This goes back to the first precept – you need to know what they look like in the seedling stage.
Start Early
When it comes to weeds, the early bird has a definite advantage. The younger and smaller they are, the easier it is to dig them up or hoe them out. We’re talking a few days to a week here.
Dig Them Up
Small seedlings are easily dug, pulled or hoed. Larger weeds can be eradicated at later stages – although it takes more effort – if you make sure to dig up the whole root mass.
Chop Them Off
With perennial plants, constant trimming with a hoe (or by clipping in a pasture) can exhaust the roots and kill the plants. Some weeds will just respond by growing lower to the ground, so don’t assume mowing is the be-all and end-all.
Smother Them
I’ve talked about barrier methods before. For annual weeds, a loose mulch like compost usually works fine. For perennial weeds, I like cardboard two or three layers thick with loose mulch on top. Watch the perimeter – the weeds will travel to the edge and come up there.
Eat Them
Lots of weeds are edible and quite nutritious: purslane, miner’s lettuce, dandelions, stinging nettle (good for soup – don’t make a salad!), chickweed, amaranth (pigweed), cattails, lamb’s quarters. Even if you don’t like them, your animals (especially chickens) will. A chicken tractor can be very useful in this respect; in the garden, make it a small one and just keep moving it along the bed. The chickens will conduct a search and destroy method quite nicely. After the chickens are done, you can plant or set in transplants (give it a few weeks for the chicken poop to mellow or it will burn your plants).
In closing, let me add that when it comes to weed control, you should take the Churchill approach – never give in. Never give in. Never,never, never, never. In illustration of that principle, I am reminded of what Gene Logsdon said about one of this uncles, a lifelong farmer. When advancing age and debility began to slow him down, he shortened a hoe handle and his wife drove him through his fields in a golf cart (this was before the days of ATVs). Uncle would lean out of the passenger seat and whack out the weeds as they passed (probably chortling all the while). Too bad that technique won’t work in a garden…